Overpopulation is the cause of environmental damage, global warming 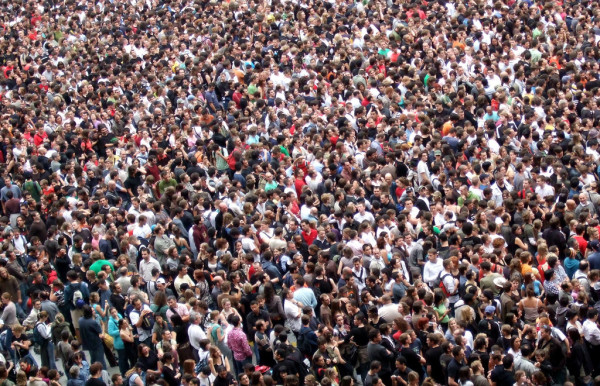 Most political issues are “proxies,” or highly visual events which stand for more complex underlying needs. Symbols tend to hide their actual meaning because that to which they refer is bigger than the symbol, and yet people tend to treat the symbols literally. Global warming symbolizes our impact on the environment as a whole, and the anti-carbon agenda represents our hope that we can avoid changing all that needs changing and instead focus on just one aspect.

A more sensible thought is to look at the basic equation of human impact:

Damage (D) is the result of Population (P) times Impact Per Person (I). This simplifies a complex issue to demonstrate a simple fact.

Thus, a world of seven billion people living in mud huts, eating vegan diets grown in their own gardens, and walking instead of driving has the same effect as perhaps three billion people living 1960s American-style lifestyles. Trying to reduce impact becomes a losing game once we see how low we would have to make impact in order to accommodate our sprawling population. Even more, that misses out on the real problem brought on by overpopulation, which is land overuse.

Recently AÅ¡Å£al Journal published an insight into the overpopulation dilemma:

The remarkable thing is that the real cause of global warming is rarely mentioned. It is the elephant in the room. Everyone can see it but no one wants to speak about it, presumably because this subject is a contentious one and challenges the core beliefs of many religions.

The undeniable fact is that we, the human race, are the cause of our own difficulties and unless we reduce our numbers, we will self-destruct.

In our last issue, we were supporting very similar views:

That climate change and its cowardly short-term compromises may gather so much attention while overpopulation remains in the shadows as the elephant in the room is an eternal source of contrived astonishment. Out of all the explanations provided for the increase in carbon dioxide production, overpopulation should figure again and again at the very top. The pressure that overpopulation puts on the planet has become â€•to employ a fashionable wordâ€• unsustainable; as unsustainable as the collective forgetting that pervades throughout the majority of countries, from decision-makers to social scientists, from educators to laymen. What is most disturbing and enraging is that it has been more than a half-century since the full disastrous consequences of population explosion have been worked out, and that so little progress has been made, so little goodwill displayed, so little awareness raised.

Even our thinking about the environment itself is based in the same denial described above that denies global warming, as another source writes:

The very fact that we debate global warming endlessly while ignoring this ongoing process of decline shows that we, as a species, are in denial about our effects on our natural world. As products of our modern era, we’re accustomed to using a process:

Despite its effectiveness for producing internal combustion engines and digital computers, this process is useless for understanding architectonic systems, or systems where the parts interact to form a self-supporting whole, meaning that no part functions as a pivot but all parts are in some way pivotal. Dragonflies eat mosquitoes, and bluejays eat dragonflies; bluejay excretory waste feeds yeast, which grows enough yeast to break down organic products and attract more advanced creatures, and these return nutrients to the earth to grow plants which in turn feed male and immature mosquitoes. It’s a giant cycle composed of many counter-dependent internal cycles.

People are afraid to face these simple truths, so they invent symbols to use as proxies. If we just each buy a Prius and eat organic local foods, we can prevail. Right? Well, no. Everyone else will go on doing what they’re doing and create the same catastrophe. Even watching wealthy first worlders decide they’re going to avoid having children “for the environment” reeks of this same mentality. This is symbolic, not a look at actual reality.

Actual reality is that Earth is finite and humans, aided by first world modes of living, are seemingly infinite. We will eventually expand to cover every livable space and then tackle the rest. This will happen because we cannot say NO to anyone, since they are all equal. If someone shows up, and “just” wants a place to live, go to school, work, hospitals, roads, food, cars, etc., who are we to say no? — if you want to know why we need arrogant kings, there’s one answer.

Something else to consider is that blaming technology is a dead end. What enabled this growth was not technology per se, but the level of organization common to a first world mode of living. We use soap; we deposit feces away from food; we remove vermin and stop epidemics. This enables us to grow like an unchecked weed. And yet, it also dooms us to the suffocation of overgrowth, which either we will stop or nature will use to stop us.

Like all human problems, the crisis begins within. It is dishonesty (and thus, sin) to take an abstraction from nature and proclaim that the symbol stands for the whole. It is dishonesty to ignore reality in favor of a proxy or symbol because it is easier to understand the symbol and thus to communicate it to others and bring them onboard. As it is outside our heads, inside our heads we are also suffocating from an overgrowth of lies because the simplicity of truth is something we fear.