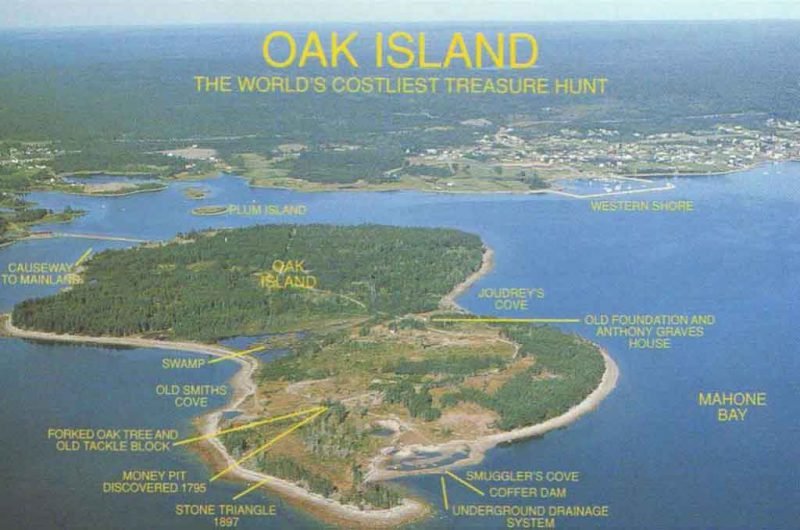 Oak Island provides for us one of those eternal archetypes of human behavior, the abuse of hope and expectation that results will be different because of our hopes.

A small island off the coast of esurient third-world state Canada, Oak Island gained fame for being the site of the “money pit,” a deep shaft where treasure was rumored to be hidden. Humans go hog wild for the thought of winning a lottery, or gaining money easily without much effort.

Over the years, numerous people have driven themselves into bankruptcy and insanity by trying to retrieve this mythical treasure. While nothing has been found, the symbol of that treasure — the image, independent of time and constraints of reality — remains, and it lures them.

If you suspend a treasure chest just over the edge of a cliff, humans will march over like lemmings, all while criticizing those who do not march for being negative and expecting the worst of life. Since none of the dead can talk, the marchers keep coming, and keep falling.

Altruism invokes the same pathology. People want to believe that, instead of undertaking the difficult task of adaptation, we can simply make others happy and be good, even better than those who simply adapt to reality and find a way to thrive within it.

Adaptation provokes human ire because it requires internal change. That is, we have to change our perceptions and behaviors in order to reflect reality as accurately as possible, and that diminishes the role of our wants, desires, needs, impulse, feelings, wishes, and hopes.

In addition, for a group to adapt, it has to face the fact that not everyone can have what they want. In fact, most will get something far less. Some will get destroyed. We can feel empathy for them all, but we cannot save them from their own actions.

Coming from the egalitarian idea that making everyone equal is utilitarian happiness, altruism posits the opposite notion: if we can save people from their own actions, no one will feel like they are at risk, therefore conflict will stop and a new Utopia will dawn.

Of all the ideas in humanity, this one has led more humans over the cliff than any other. Not just individuals but whole groups and nations have thrown themselves into the money pit of equality and utilitarianism.

People even self-destruct for altruism willingly, believing that they achieve a greater reward in death than in life.

Altruism shows us the classic devil’s bargain: in order to make themselves safe from attack by others, people band together in gangs, cliques, mobs, herds, cults, and cadres whose sole goal is to make everyone equal, therefore equally safe from attack, criticism, or demeaning by others.

They struggle against hierarchy itself, since if there is any shared goal, then some will achieve more than others and a natural hierarchy by competence will emerge. This creates those who know better, which means that most will be subject to criticism and possibly attack.

This safety comes with a high price, as it usually does. The Crowd will tolerate you, but only if you tolerate them, including the most egregious violators. Sure, it will keep murder, assault, rape, and visible theft taboo, but only for those who are not doing them to further achieve equality.

In this devil’s bargain, the individual gives up individuality for individualism, or the ability to place himself first before all else. In turn, he becomes a slave to the individualism of others, supporting it with his time, energy, and wealth.

Over time, the burden grows because nothing exists which can limit it. Anyone who seeks to implement standards or goals above the mean is viewed as an attacker and drummed out of the group. Only those who accept mediocrity are accepted.

The problem with lowest common denominator goals turns out to be that the floor always drops. If we accept a standard of a B, then the outliers below the mean will have Cs, so the next generation aims for a B- instead of a B. Future iterations drop further.

Egalitarians therefore consistently do one thing, which is to take from the higher to subsidize the lower, since the lower cannot raise themselves, being of lower ability. For the lowest common denominator to prevail, the outliers on the bottom must be defended and those above the mean punished.

Altruism dominates human brains because it is a whole philosophy of life in a simple idea and this makes our brains feel more powerful. Why worry about the complexities and pitfalls of life when you can have a simple absolute rule, even if it grows more inexact (and thus reality-denying) by the day?

In contrast, holism tells us to look at the whole of the situation, including human individuals but adding to that intangibles like nature, natural order (a strange sort of pattern mathematics), the divine, culture, history, and future. It asks us to think of civilizations, not individuals.

This naturally proves far less popular, but it reminds me of something we had as kids that we called The Infinite Forest Castle. This was based on a holistic rule, namely that something had to be awesome to be acceptable. It was about the experience of life and the joy we found in things.

The great thing about The Infinite Forest Castle was that it was not concerned with individuals but experiences. We went into the woods, had battles, territories, and uncountable rooms for us to experience life in, to learn about our world.

In those woods, nothing permanent remained except the forest itself, and so we were able to experience life as a whole without becoming bound to illusions either material or symbolic. It was not egalitarian; people mattered less than awesomeness, than experience which moved us to enjoy life and forget ourselves.

Humans balk at The Infinite Forest Castle because there are no guarantees or safeties. It is simply raw experience which tends to reward the inspiring over the fearful. And yet, it is the path to our happiness, while altruism leads only to suicide.

Careerism tears down everything in the West. Altruists are just careerists.