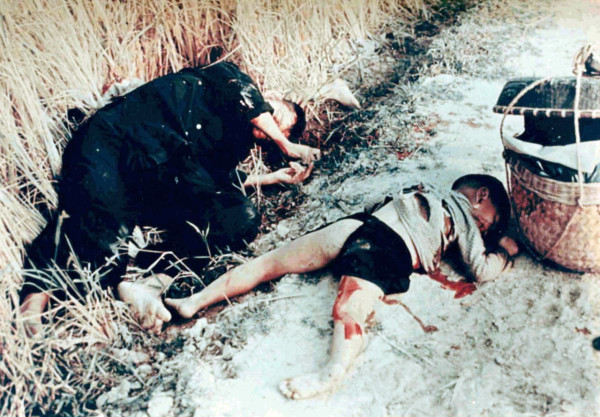 America recoiled in shock at the My Lai massacre. In a war where the enemy routinely tortured, mutilated and killed villagers in order to maintain control, and where American troops greeted smiling villagers to hand out food, medicine and agricultural help only to see those same smiling faces shooting back at them at night, My Lai was not an aberration.

It was an inevitability.

One side got all the advantages, protected by the useful idiot public image war fought on American televisions. American soldiers must have felt like they were on another planet when they read and saw news reports, none of which mentioned the tendency of eight-year-old girls to smile and laugh and then throw grenades concealed in their dolls. Nor did the media mention the routine atrocities that the Communists used to keep power.

Our journalists were iconoclasts, you see. They wanted to prove they were different. That means taking the side of the enemy because everyone else has taken the side of your own nation. The pathological hatred of origins that emanates from our media and the left is not designed as a positive goal, but a negative one, and a personal one. They want to appear different than the rest, which lets them play pretend that they are prophetic Christ-figures, not merely self-interested attention whores. They have something to conceal after all.

America has been preparing a My Lai with its treatment of police.

We must ignore the failure of diversity, manifested in crime rates and poverty levels that correspond to average IQs, ranking the third-world groups we have imported from African-Americans to Hispanics and South Asians to East and North Asians. None of these groups fully integrate and all of them act against the interest of America as a whole, but this is a failing of diversity itself, which requires that groups give up identity in exchange for acceptance by a non-culture of compromised, averaged culture.

We must ignore the failure of social order. In the 1940s, we decided on a relativistic social order so that we might preserve equality. We followed historical precedent; the French and Russians did the same thing. Relativism says that the individual interprets social standards according to what is convenient for him. If he falls short, we measure his relative success and excuse his failings. This basically means no social standards, thus no social order.

We also must ignore the fact that we have been ignoring the general decline of our nation. On every important topic, there is a War on Noticing that reality does not match the narrative. The jobs reports are fluffed, the assurances made to Congress are polished, and the nightly news is a cartoon fantasyland view of an America that no longer exists or never did. We float on a sea of lies, designed to hide the drain below which is the inevitability of our decline. On police the media re-lives a caricature of the 1960s civil rights movement.

The press, coincidentally, loves cops only when it needs one. In order to appear more appealing to its audience, the press cultivates a “fun” image. They love ironic humor, street “art,” marijuana, and people giving the finger to authority. See, they’re on your side! This means that most of the time the police are the party poopers who show up and stop all of us fun people from doing the brain-destroying or otherwise vandalistic things we do to amuse ourselves while waiting for our society to fully implode. But if there’s a rapist on the loose suddenly the news loves a cop.

As a result of the above forces, police are caught between public image and some nasty criminals. These are not the sensible bad guys from the 1930s who know when they are nabbed and merely curse the police. Our new criminals are flaming idiots: they go on 120 mph car cases, shoot back, attack cops, and otherwise become literally insane when the net closes in around them. Unlike past criminals, the new criminals seem to have no idea that they can be caught; they think life is GTA IV. They are dangerous because they are delusional and panicked.

But in the media, movies/television and the eyes of politicians, these new criminals are innocent victims of the system. Our relativism has us blame the rule when someone infringes, and our civil rights mad media has us see every minority as a victim. This puts cops in a situation where they bend over to the breaking point, as in My Lai. When they cannot fight the real enemy, they hold their fire until frustration overcomes them, and then the dark tunnel of “exterminate all of the brutes” rages into the fore.

VDARE covers this case as usual with lucidity:

There are actually two videotapes of the incident, which was remarkably protracted. One is the dashcam video from Officer Slagerâ€™s squad car. It shows that Walter Scott had no registration or insurance for the car he was driving, and that he couldnâ€™t keep his lies straight, regarding its ownership. He said, alternately that he owned the vehicle, and that he was in the process of purchasing it. Scott was lying like a thief.

…Officer Slager apparently tried to use his Taser, but was unsuccessful.

In bystander Feidin Santanaâ€™s video, whose order CNN deliberately scrambled, Officer Slager and Walter Scott are seen wrestling on the ground. In the next scrambled installment, they are wrestling standing, with Scott pulling the Taser out of Officer Slagerâ€™s hand (the Taser falls to the ground), whereupon Scott takes off yet again, but this time, Officer Slager fires eight times, hitting Scott in the back five times, and the latter drops to the ground, lying on his belly. – “Here We Go Again: Walter Scott, Michael Slager And Another Post-American Lynch Mob,” by Nicholas Stix, VDARE, April 10, 2015

This narrative will not be reported. The media sees white on black violence and police violence and believes they add up to dollar signs. That is because media, which is steadily losing ground as an industry, has driven away anyone who has enough intelligence to distrust the narrative. Now they have a smaller captive audience of the creduluous, and those put their hands together anytime a familiar narrative shows up. It gives them a chance to demonstrate how intelligent, altruistic and savvy they are when they follow the narrative, not noticing — because they are the credulous — that everyone else but the intelligent are doing the same.

In the meantime, commentators on the left and right have started beating the “police brutality” trope:

Because cops like that animal in South Carolina â€“ a product of police state New Jersey, by the way â€“ are what the cowboy shows called â€œman killers.â€ They have acquired a â€œtaste for bloodâ€ and they are, in a real sense, animal predators that have lost their natural fear of Man. There is no redeeming them and they will shoot a man, white or black, just the same. Donâ€™t believe me? Why do you think I forward all these police brutality stories? To prove to you cops [can be] Equal Opportunity Killers without regard to race, class, national origin or especially Vietnam Status. – “On ‘Comply or Die’ Policing,” The Thinking Housewife, April 10, 2015

This narrative is like all things in modern society inverted.

We need police more than usual because we have no social order and no culture in common. Without standards, people do whatever they want, and the cops rein them in when they get too dangerous.

“Police brutality” means cops deliberately using excessive force. The term has been extended to apply to any police violence that the crowd does not like, which means they ignore any of it that does not fit the narrative and categorize many justifiable incidents as police brutality.

This puts the police in a paranoid position where they nonetheless must go out there and deal with the residual effects of our society’s poor choices. Frustration and anger inevitably build.

We’re setting up another My Lai, and no one will talk about it.

Our political enemy is politics itself | Legalize Rape, revisited