My Favorite 9-11 Theory Comes Out With Italian Bridge Collapse 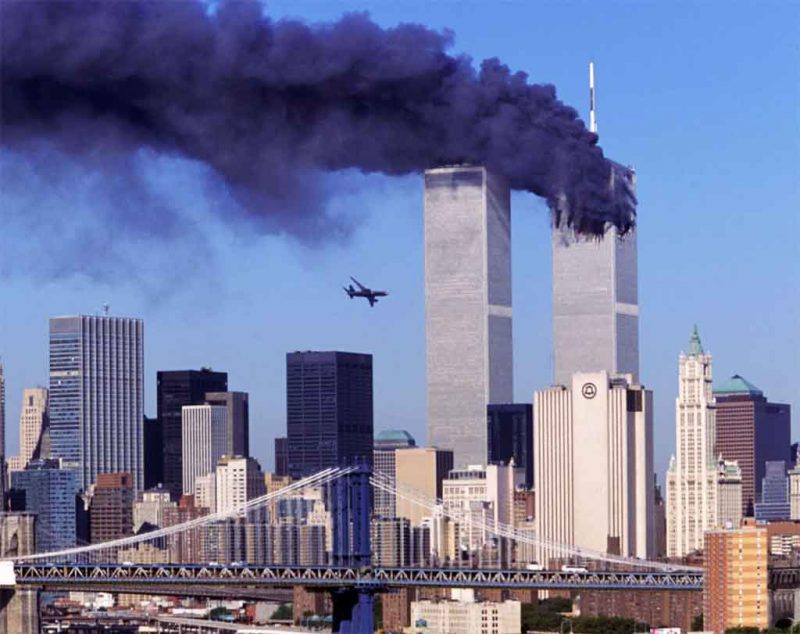 When 9-11 happened, conspiracies flew as they always do. There was dancing Israelis who filmed it and cheered… the building was dynamited by the government… the plane that hit the Pentagon was actually a cruise missile. None of these made sense since the parties in question had no incentive to do what was claimed.

The only links were stretches. Perhaps Israel wanted another Pearl Harbor so America would attack Iraq, but that seems to have backfired and was never a certain thing. Perhaps the government wanted to unify its population around a war, or have an excuse to spy on its own people. Maybe. This seemed a lot of effort for something relatively easy.

Of course, the idea that controlled demolition felled the buildings struck me as both the most ludicrous, and an attempt to explain the least explicable part of the whole drama. Instead of being the sturdy skyscrapers we expected, the towers seemed to collapse relatively easily.

Those of us who have been around Planet Earth for awhile know how acutely appearance can not resemble the underlying facts of a case. Dumping a whole lot of burning fuel onto steel and reinforced concrete can weaken it just enough that it begins to crumble, at which point the weight of a skyscraper works against it.

And yet, it seemed like those skyscrapers fell awfully quickly. To my mind, it seemed that this could be explained by an old New York legend: that of the Mafia, who was linked to every construction site where a union was present, substituting inferior building materials for what was actually specified.

This scam begins by having an architect specify expensive materials, which are then “liberated” from the construction site by nefarious actors, and replaced with cheap imported varieties which are then approved by (bribed) inspectors. The criminals pocket the difference in cost between the high-quality materials and the inferior substitutes.

Rumor had it that New York architects got wise to this and began to design buildings that used quite a bit more steel because they knew that the construction would involve materials a few grades below what was originally designated. That would keep the buildings aloft for the half-century required for all parties to escape prosecution.

Not only that, but law enforcement was aware of the problem in the 1980s, revealing a wide breadth of afflicted construction projects:

Says Thomas Galvin, former chief executive of the convention center and now president of Xerox Realty Corp.: ”It was an open secret that concrete was Mafia-controlled.” During the past decade, 17 federal, state, and city investigative agencies have been probing New York’s crime-ridden construction industry. This scrutiny has resulted in scores of indictments and convictions. Just two weeks ago, Salerno and Vincent DiNapoli, another partner in S&A Concrete, were convicted of racketeering in federal district court in Manhattan, along with three other mobsters and four of their business associates. After a 13-month trial prosecuted by Assistant U.S. Attorneys Alan M. Cohen and Mark Hellerer, they were found guilty of rigging bids for building the concrete superstructures of 16 major projects in Manhattan, among them the Javits Center. The jury stripped Salerno and DiNapoli of their interests in S&A. Crime is so deep rooted that New York Governor Mario Cuomo this year ordered the formation of a special Construction Industry Strike Force, consisting of about 100 prosecutors, investigators, accountants, and analysts. It is the first law enforcement group in the country to concentrate exclusively on the building industry.

…The document’s most disturbing charge is that the construction industry is alarmingly comfortable with the Mafia. The report bluntly concludes that many developers, builders, and contractors ”believe that the monetary costs of corruption are more than offset by the money saved or earned through corruption.” As a result, the report contends, the industry has ”become dependent upon” the crime brotherhood. Mafia muscle, it states, assures ”contractors that they will only have to pay off once, that the amount will be reasonable, and that the services paid for will be delivered.”

Corruption seems to have infiltrated heavily through unions, causing the virtual partnership of organized crime in all construction projects, as even the New York Times was forced to admit:

Organized crime controls 75 percent of the construction industry in New York City through its control over the concrete industry and construction unions, an admitted mob captain told Senators today.

Vincent (Fish) Cafaro, a former captain in the Genovese organized-crime family in New York, told the Senate Permanent Subcommittee on Investigations that the Mafia rigged contracting bids in the city by demanding a 2 percent kickback from winning bidders and their unions.

”Legitimate guys ain’t got a chance,” he said.

Legitimate guys not only did not have a chance, but they were entirely excluded from the industry by 1986:

In March 1982, in a series of articles about organized-crime influence on the city’s construction industry, The New York Times reported that Mr. Halloran had secretly acquired control of Manhattan’s only three concrete supply companies.

…Buildings where bid-rigging was said to have occurred, besides Trump Plaza, at 167 East 61st Street, included several other luxury apartment buildings and residences for Mount Sinai School of Medicine and Memorial Sloan-Kettering Cancer Center, all in Manhattan.

Most of this focuses on bid-rigging, but no one has ever known organized crime to limit its take to one level of an operation. The World Trade Center was built over five years starting in 1966, which places it within the scope of corruption described by those who follow NYC’s corrupt construction industry and its organized crime ties:

For 100 years, organized crime, working through corrupt unions, has levied a huge tax on New York’s economy. Now prosecutors and pols are learning how to fight back.

…The mob’s control of labor unions, which gives it power over New York’s economic life, goes back to the 1920s, when unions, their members mostly Jewish and Italian immigrants, turned to street gangs to provide muscle against strikebreakers and rival workers’ groups.

…“Every industry I’ve ever seen the mob take control of started with their influence in the union,” says Daniel Castelman, chief of investigations for Manhattan District Attorney Robert Morgenthau.

…One thing that makes organized crime so difficult to eradicate is that the mob’s close union connection keeps politicians—especially Democrats heavily dependent on union support—extremely hesitant to mess with it.

…Corruption in New York’s construction industry goes back at least 100 years—when United Brotherhood of Joiners boss Robert Brindell gained control of all the construction unions and made a cynical deal with the Building Trades Employers’ Association that drove independent contractors out of town and tripled or even quadrupled construction prices in the city. But New York’s five big crime families have had a lock on many of the main construction unions since the 1920s. By the 1980s, the state’s Organized Crime Task Force observed, mobbed-up unions gave the wise guys a grip on numerous facets of construction, including transportation, cement and concrete work, masonry, painting, carpentry, and plumbing.

We know that organized crime deals in reselling steel:

The demolition contract allowed Picone to sell salvageable materials from the job, and Mr. Gravano and Mr. D’Arco said the scent of the steel brought the Colombo family into the transaction. In their statements, they identified Thomas J. Petrizzo as a capo, or captain, in the Colombo family, who wanted the girders for A. J. Ross Logistics Inc. of Keasbey, N.J., a company that he headed in 1989. The Ross Company produces and sells steel bars used in buildings, bridges and roads.

Mr. Petrizzo, the mob defectors said, controlled Local 1456 of the carpenters’ union, a local that specializes in dock construction, and he offered Lucchese leaders an irresistible proposal. If they gave him the steel he would insure that carpenters and nonunion employees worked on the highway for lower wages than ironworkers, increasing profits for the Picone Company.

…Mr. D’Arco told the F.B.I., “The labor peace which ensued helped Picone and Petrizzo make a large sum of money from the scrap steel alone,” according to a 1991 report.

If the world trade center buildings proved to be frail, one actual conspiracy theory might involve organized crime having ensured that those buildings were weaker in reality than on paper, which could explain why some experts had trouble explaining the crumbling of the towers and nearby buildings.

As it turns out, this conspiracy theory may be grounded in reality, as we can see through the study of another assisted collapse, this time the Genoa A10 Morandi bridge which fell apart killing thirty-eight:

Questions are now being raised as to whether or not the Italian Mafia may have been involved during the bridge’s construction more than 50 years ago.

‘Mafia-related companies are known to have infiltrated the cement and reconstruction industries over the decades and prosecutors have accused them of doing shoddy work that cannot withstand high stress,’ Canada’s Globe and Mail wrote.

Similar allegations were made by Dave Parker, Technical Editor Emeritus of New Civil Engineer, who told Radio 4’s Today that ‘according to urban myths, the mafia had a very big finger in the pie of the concrete industry back then, charging full price and putting less cement in.’

This should surprise no one because unlike the truly whacked out conspiracy theories, self-interest explains the activity. Cutting corners is the most common way to make profit off of a construction project, and organized crime has for years managed to infiltrate itself into development contracts through unions and city officials.

In Italy, a “second world” country where corruption is a fact of life much as it is in third-world nations like Brazil, Mexico, and India, organized crime presence on job sites exists even without union presence, unlike in the first world where unions seem to always serve as a gateway (and donate part of the profits to the Left).

As our infrastructure in the West further crumbles, we will likely find more cases of construction projects that fail to meet up to the standards that they met “on paper,” simply because a few dozen people signed off on those “facts” shortly before buying second homes.

Toxic Masculinity Is The Product Of A Contaminated Environment | Is It Logical To Treat Social Media Sites As Private Companies?