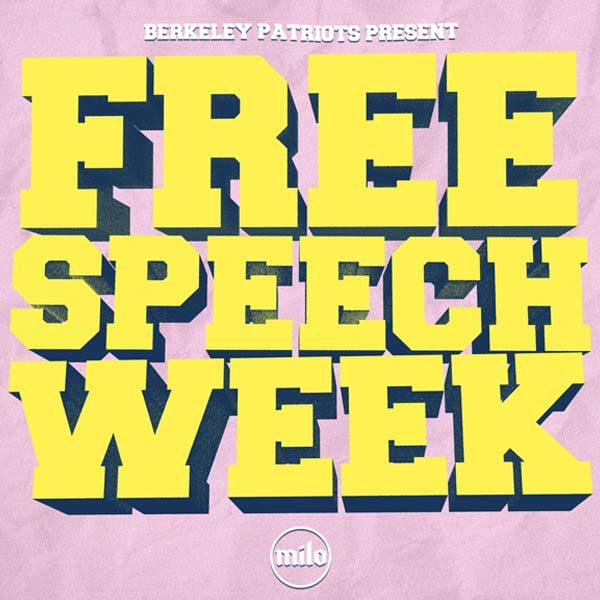 To succeed in a time of the oblivious, one must be a masterful troll as well as have a grasp of the real issues which lurk just under the surface of the two-dimensional images that people manipulate in order to feel smart and smug. Milo Yiannopoulos displays the traits of a master of provocation, and he proves it by launching a timely “Free Speech Week” in Berkeley, California.

His success will come from two factors: Charlottesville and Berkeley. The riots ensuing after “Unite the Right” in Charlottesville have showed us that wherever Right-wingers, even Alt Lite cultural libertarian types like Yiannopoulos, appear, there also will be violent and soulless masked Antifa on a mission to vandalize and destroy. Last time Right-wingers spoke in Berkeley, the place almost burned. This time, Yiannopoulos is going to win big by forcing Berkeley to either enforce free speech, or burn in the chaos of thousands of NGO-fed rioters.

MILO described Berkeley Free Speech Week by saying, â€œWe want to bring together liberals, conservatives, and whatever libertarians arenâ€™t too busy mining bitcoin, to celebrate free speech. In the not too distant past, that is what every day at American universities was about. Now free speech is shunned, and in some cases violently shut down. The free speech movement is being reborn at Berkeley, next month, by us.â€
We will announce the full list of speakers soon. Hereâ€™s a hint — it will include every speaker banned by Berkeley in the last 12 months.

The themes for Berkeley Free Speech Week include:

On Wednesday, MILO will present the first annual Mario Savio Award for Free Speech to the person who has most courageously fought for free expression in America.

You can find out more on the website, freespeechweek.com, for as long as it lasts under the assault of Google de-registration, GoDaddy suspensions, DDoS attacks, hacking and probably people chucking bottles of urine at the servers.

Some may find it odd that Amerika supports Yiannopoulos. Amerika is a conservative blog but we accept conservatism in full, not just the politically-correct parts, and so we are “roots conservatives” and “raging realists” instead of people who see pragmatism as compromise and therefore sell their political beliefs in exchange for popularity and acceptance by those who wish to destroy them. Our goal is to meld the Right by showing the continuity of its ideas from the French Revolution through the Alt Right, and beyond.