Marriage isn’t a casualty of our economy

Marriage and long-term relationships face a difficult future not because of the economy, but because we’ve trashed the idea of sex as a means to an end — the family. A culture shift in the 1960s and 1970s allowed people to trivialize sex, but the process started long before, and the “sexual revolution” was more the seams of our formerly great culture bursting.

Hindsight is 20/20, but it also causes people who have been affected by these problems to assume that institutions in and of themselves are faulty due to the end result of societal problems, rather than looking at root causes. 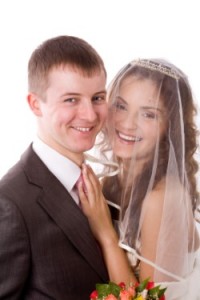 For example: America wins World War II. The economy booms. People have plenty of money and resources. Pleased with ourselves, we realize it was wrong to disallow certain people to vote, and wrong to discriminate – this country of plenty can provide for anyone, so everyone should have a say in how it’s run.

As other writers in this blog have noted, however, this “revolution” really began in 1789, a result of The Enlightenment.

Even science and medicine fell prey to this new paradigm of throwing out all the old methods, even the ones that worked. Psychologists pandered to children, coddling egos instead of using disciplinary measures to address problems. Nurses told mothers to pump out their breast milk and throw it away in favor of formula.

Society put the cart before the horse, because we assumed that external things like institutions regulated results, not intentions/nature/moral standing.

And how did all that feminism, liberation, etc. work out in 2010?

As long as marriage remains an institution designed to suck the lifeblood out of men for the benefit of lawyers, the government and women, it will continue to weaken until it meets its well-deserved demise.

OK, there’s a couple of things going on here, per the writer: marriage is parasitic, and it will “continue to weaken until it meets its well-deserved demise”.

Again, cart before horse: marriage is parasitic when waged by parasites, but wonderful and joyful in the hands of those competent of building lives with others. As for well-deserved demise, seems like alarmist hype to anyone capable of a real relationship.

Statistically, marriage may be fading with this recession, but it’s not the economy killing it:

Recently released Census Bureau figures reveal that in 2009 the proportion of married Americans fell lower than ever, dropping 5% in the last 9 years alone. Compared to 57% in 2000, today only 52% of all adults are married. The institution of marriage is crumbling under a combined feminist and federal assault, which has legislated it into something that is roughly the opposite of what it used to be.

…if current trends continue, marriage will cease to exist within roughly twenty years. 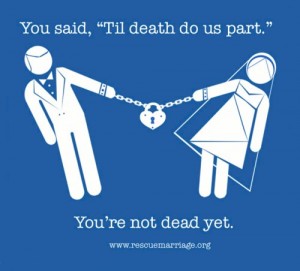 Seems a bit alarmist. There are plenty of happily married people out there. Since the beginning of our focus on individual “freedom”, many have rutted like pigs in sex, food, whatever strikes their fancy. The rest, a dwindling minority, cling to supposedly outdated traditions like education, marriage, religion, practical knowledge, and fitness.

We can draw a parallel between dwindling marriage rates and student loans. Once you make it easy for students to get a loan, almost irrespective of the students’ ability to pay it back, tuition rates increase. Why? Because college boards are savvy enough to know that easy money means higher costs are tolerated. Then the very idea of education is cheapened, such that students are just bags of money with dollar signs on them.

Similarly, with marriage, if you pass legislation that makes it easy to divorce in a time when plenty of bitter and broken people want to do so, of course you’ll see the divorce rate skyrocket. The lawyers, politicians, etc. referenced by the author were a product of the times, not villainous predators looking to cheapen an institution as a cause toward a greater goal.

People have become increasingly short-sighted, and lack the quality which allows marriage to flourish between two individuals. They are trained, in part, to be this way by media, selfish parents, and an educational system that spits them out like assembly-line automatons after passing a series of standardized tests.

The cheapening of all institutions is a result of a culture shift away from community and core values formerly shared by many. When you’re done marrying and procreating, then regretting it, you’ll possibly have messed-up kids with absentee landlords as parents, but at least you’ll get to go camping with your buddies, go to concerts, drink beer, and pursue all your career ambitions with day care right there to raise the products of a marriage that probably shouldn’t have existed in the first place.

Rather than cheering the destruction of the institution while it crumbles around us, as the writer of the aforementioned article suggests, we should rather reshape our culture such that the lawyers and politicians need not concern themselves with marriage.

Marriage isn’t the cause of problems; neither is the economy the cause of marriage in decline. We should instead look toward our attitude that it’s better to make life easier for ourselves as individuals than strive for what is right and honorable. Let’s not use generalizations to confuse what marriage is to many people today with what it can be to the right people.