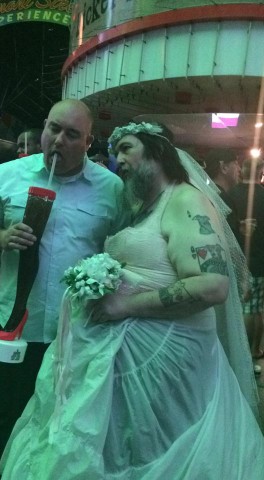 An emerging trend has caught my attention as it exemplifies the utter insanity of social reality trumping what should be painfully obvious. For decades now, ‘social scientists’ have insisted on detaching the notion of biological sex from its psychological, behavioral, and cultural aspects called gender. The prevailing idea has long been that while sex is clearly a binary, gender is an expansive and complex continuum. As troubling and misleading as this idea is, it at least has a grain of truth to it. However, this prevailing attitude is slowly being replaced by something worse.

The new hip ‘scientific’ view is that biological sex as a binary is false and that sex comes in a wide range of variations. The underlying concept is that sex can be defined in a variety of different manners (e.g. by genes, genitals, etc) and there exist pathological abnormalities (e.g. extra chromosomes, ambiguous genitalia) that cannot be clearly framed in a strict binary. Thus, traditional concepts of sex must be overturned in favor of the new ‘science’ of many different sexes.

To the average person with just decent enough common sense, this seems absurd. However, some may find it difficult to properly articulate exactly why. My hope is to do just that.

For the sake of simplicity, let’s ignore the problems inherent to the gender sex divide. In addressing the concept of biological sex, the issue has been convoluted by attempts to understand sex from an individualistic, humanist perspective.When a person’s sex is understood as an identity within a social context, the idea of drastic variation seems almost downright plausibleâ€¦ the way pretty much anything seems plausible if you have your head buried in the sand. Sex is not an identity in that sense. A person’s sex is determined by their relation to a larger biological process, namely sexual reproduction. This biological process transcends human dynamics and is part of the larger natural order. Therefore, inherent principles and standards arise in relation to this process.

The evolutionary advantages of sexual reproduction is an interesting topic but are not necessarily relevant to this discussion. The principle of real concern for humans involves the necessity of two qualitatively distinct types to fulfill this process. That is, there is a male type and a female type. One of each is needed to partake in the process. There are not several unique variations that interact in different ways. There are only two that interact in a single fashion. Once this completely self evident truth is realized, the sea of confusion the left has brought splits open. Effectively what the left is attempting to do is normalize pathological deviation from natural standards, because the left hates standards, even more so here since these deviations are generally the result of genetic abnormalities completely outside the control of the individuals involved.

This cuts right to one of the fundamental delusions of left, namely that people are born perfect and corrupted only through culture. To say that certain persons are born inherently defective is unthinkable to someone in that mindset. Furthermore, individuals suffering from such abnormalities are easily made into sympathetic victims given the extremely intimate and unfortunate nature of their problems.

Regardless of any judgments to be made with respect to this issue, there are a more fundamental concerns at hand. Truth should never be feared, and nature should be respected, not fought. In an age of misplaced good intentions, distorted values, and warped perspectives, there are certain grounds which simply cannot be ceded. I believe this is one of them.