Malcolm Muggeridge Saw Our Leftist Future And Rejected It 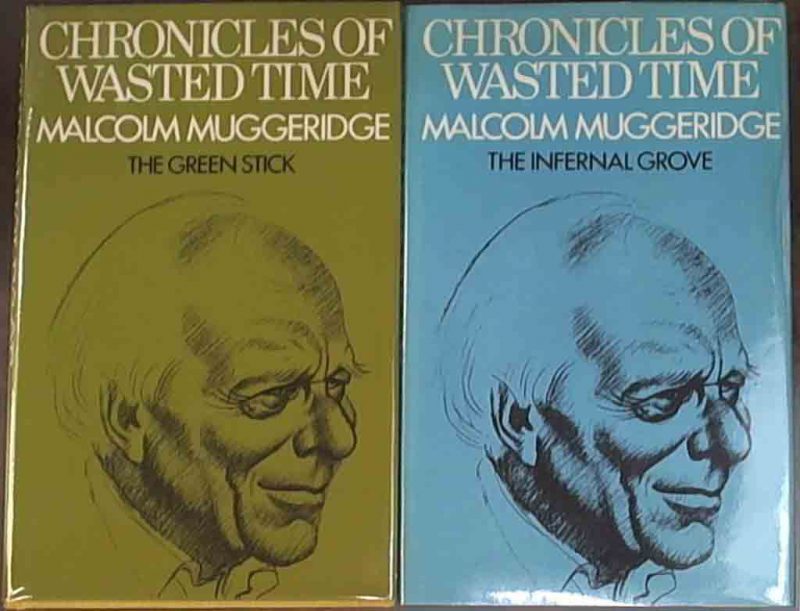 As people standing among the ruins of a once-great civilization, we have to rediscover wisdom — which is eternal — from the giants upon whose shoulders we stand. “Education” will not do this, because most of it is not explicitly Leftist, which is all that education teaches now.

In our archaeological pursuit, we are digging through the foundations of the past to see where profundity (higher degree of accurate depiction of reality through approximate heuristics and metaphor) can be found.

One such semi-discovered thinker is Malcolm Muggeridge, who served as a dividing force among the intellectuals of his time, separating them into conformists and realists, essentially. He also chronicled the Ukrainian Holocaust, as the introduction to his Chronicles of Wasted Time reveals:

His instincts were on display in the winter months of 1932-33 when he served as stand-in correspondent for the Manchester Guardian in Moscow. He did a daring thing: he had his Russian interpreter buy him a railway ticket to the Ukraine and North Caucasus. What Muggeridge saw on that extended rail trip he never forgot; years later he wrote that it ‘remained in my mind as a nightmare memory.’ And he did his best to make sure the world did not forget.

He saw the richest wheat lands of Europe turned into a wilderness. He saw famine – ‘planned and deliberate; not due to any natural catastrophe like failure ofrain or cyclone or flooding. An administrative famine brought about by the forced collectivization of agriculture. . . abandoned villages, the absence of livestock, neglected fields: everywhere, famished, frightened people.’

His reporting produced a chorus of denunciation. The policy of the British government, and the inclination of the chattering classes, was wholehearted support for what was then called ‘the Soviet experiment’. Muggeridge was denounced as ‘an hysterical liar’ by such eminent personages as the Very Rev. Hewlett Johnson, Dean of Canterbury, who, from his pulpit had praised Stalin’s ‘. . . steady purpose and kindly generosity’; by Harold Laski, who assured all who would listen that the show trials of the Old Bolsheviks were models of judicial fairness. George Bernard Shaw, who had just returned from a visit to Russia, contradicted Muggeridge ’s accounts of famine by describing granaries full to overflowing, attended by apple-cheeked granary maids. Even Malcolm’s aunt by marriage, Beatrice Webb, joined the chorus, repudiating Muggeridge’s assertion that forced labour existed in the Soviet Union; though when pressed in private conversation, she did acknowledge, almost wistfully Malcolm noted, ‘In Russia, people disappear.’

The elites in the UK and US wanted to believe in the Soviet model, since having imbibed the doctrine of egalitarianism, they wanted a class war that ended with everyone being equal, and socialism/communism seemed like the best way to make this happen.

We forget, now, but in the 1930s, for intellectuals a belief in Communism was as normal as praise for Barack Obama is now. Egalitarianism acts like an infectious disease which renders people into pathological obsessives.

They do this because elites get where they are — at least in democracies — by placating the masses and offering ideas that like products are appealing. If people want auto-loading dishwashers and cherry-flavored soft drinks, they also want “me first,” and through that pacifism with the herd, and through that egalitarianism, and they will buy books, magazines, and professorships with the popularity that their collective desire creates.

Ironically, this is parallel to the situation in dictatorships, which become weak because whoever flatters the dictator (National Socialism) or repeats the doctrine loudly enough (Communism) is chosen over more competent options. Perhaps all modern systems — similar in that they are based in mass culture, mass mobilization, and mob rule a.k.a. popularity, democracy, and the success of products — tend toward the same basic structure at the same point in their evolution.

Eventually, someone broke rank with the echo chamber of the educated herd and proved Muggeridge correct while unintentionally pointing out that all the politicians, pundits, academics, scientists, intellectuals, writers, artists, journalists, and the Pulitzer Prize committee were not just wrong but delusional:

In his masterwork about Stalin’s imposed famine on Ukraine, “Harvest of Sorrow,” Robert Conquest has written:

As one of the best known correspondents in the world for one of the best known newspapers in the world, Mr. Duranty’s denial that there was a famine was accepted as gospel. Thus Mr. Duranty gulled not only the readers of the New York Times but because of the newspaper’s prestige, he influenced the thinking of countless thousands of other readers about the character of Josef Stalin and the Soviet regime. And he certainly influenced the newly-elected President Roosevelt to recognize the Soviet Union.

What is so awful about Duranty is that Times top brass suspected that Duranty was writing Stalinist propaganda, but did nothing. In her exposé “Stalin’s Apologist: Walter Duranty, the New York Times’s man in Moscow,” S.J. Taylor makes it clear that Carr Van Anda, the managing editor, Frederick T. Birchall, an assistant managing editor, and Edwin L. James, the later managing editor, were troubled with Duranty’s Moscow reporting but did nothing about it. Birchall recommended that Duranty be replaced but, says Taylor, “the recommendation fell by the wayside.”

Many have wondered how modern times, or the era after the kings, could have so many truly vast and appalling events, and the only answer that anyone comes up with is that people were caught up in some kind of mass delusion or mentally infectious trend and both denied reality and embraced a false image.

Those of us who are cynical realists see a different picture, which is that we embraced a Big Lie long ago, equality, and now are telling infinite other smaller lies in order to avoid having to admit that the Big Lie was wrong, and that we are all now its slaves.

Regardless, it is worth remembering Mr. Muggeridge for the great favor he did us all by pointing out that the egalitarian emperor has no new clothes after all, that Stalinism was a failure just as the Soviet Union turned out to be, and that our civilization has sent itself on a path to ruin by embracing the Big Lie.