Love And Hatred Are Two Sides Of The Same Coin 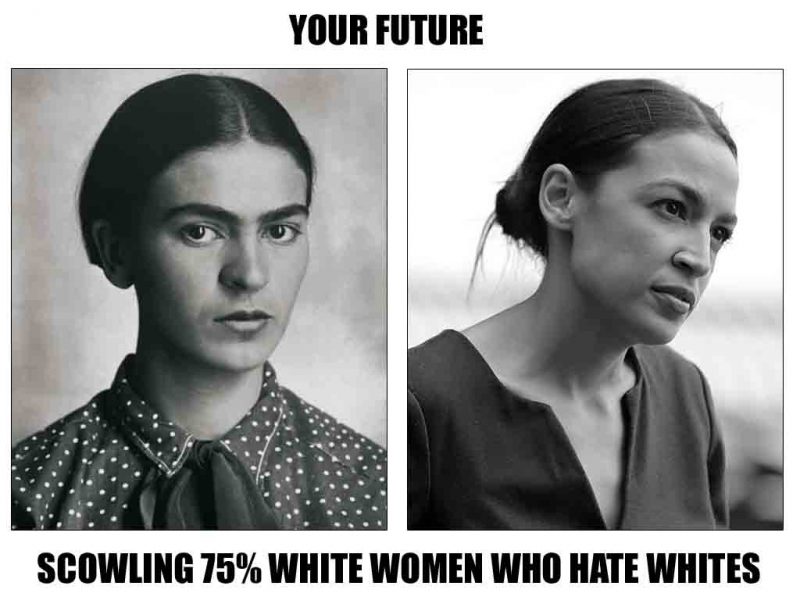 Why do famous Leftists like Don Lemon, Kamala Harris, Sarah Jeong, and Alexandria Ocasio-Cortez all have white boyfriends or husbands? Probably for the same reason that white nationalists fixate on Jews and Africans and leave their own people to rot.

Hatred is a strange emotion. A supremely logical person looks at a threat and gauges its intensity. After all, there are always threats. If the threat is far off, it can be watched, warily, and if it is near, it can be avoided, distracted, driven off, or convinced to go elsewhere by other means.

Only when there are no other options do we turn to battle, and when that happens, we seek to purge ourselves of emotion entirely so that we can be systematic machines of structural destruction. Wars are not won by attrition, but by crippling the ability of the enemy to hold territory and respond, at which point they can be driven away.

Most threats we simply dissuade. The response to wolves in the woods rarely involves killing them all. Instead, we build fences, kill the few that venture too close, and make them fear us by intruding on their spaces, gradually driving them back. Wolves in a forest far away bother no one.

Hatred, however, becomes all-consuming. Once you fixate on something, it replaces your positive goals and you become purely negative, solely destined to destroy and most importantly, only feeling joy in destruction. This destroys your ability to enjoy life.

I noticed this first with anti-Semitism on the Right. There are things to criticize about Jews, and perhaps Nietzsche does it well, by keeping the good in balance with the bad; in the bigger picture, diversity does not work no matter what groups are involved, so no Other groups can live among us.

With that in mind, we should look at the diversity question again, which says that diversity does not work because it cannot work because it is paradoxical. Every group acts for its own self-interest alone, and combining them together and hoping that they will work for the same political, legal, and economic system is mere foolishness. Worse, it creates a society where everyone must be united in ideology, which is a textbook scenario for Leftist tyranny.

Jews, thrown into this environment, as a highly tribalistic and more intelligent than average group, naturally acted toward their own power, which meant getting into positions of authority and using those to smash down anyone who might object to the presence of Jews. That like all forms of bigotry quickly got out of hand, just like Hitler’s rants against the Jews became a force that he could not control which ultimately swallowed up the Nazi party.

Anti-Semitism takes a kernel of truth and makes it into a religion, but the problem is that this religion worships a foreign god, specifically the object of hatred. As a result, all critical thinking and strategic analysis stops, replaced by attributing all ills to the evil god Jew and all good things to the removal of the Jew.

It naturally takes on a fanaticism which confirms itself in every case of a Jew doing something wrong, and leads to the ultimate conclusion that Jews are an enemy like an infectious pathogen that can only be cured by killing it.

Cooler and more aggressive thinking sees that the problem is whatever caused diversity, and thus caused Jews to live among us, because no one cares when Jews are at home in Israel doing whatever Jews do (probably: Netflix and hot pockets, sans ham). End diversity, end the problem.

Kill all the Jews? Maybe this ends the problem, but it creates another: now you have no idea who you are, and what you want to do. The same is true of obsessive hatred of Africans, the rich, the elites, or even of minorities hating whites. You become absorbed into the object of your hatred.

For this reason, it is not surprising that famous anti-whites often have white boyfriends or husbands. They have become victims of a human cognitive deficit, target fixation:

The motorcycle rider crashing into these bicycles almost certainly experienced a phenomenon called target fixation. The phrase was coined during World War II to describe what happened to fighter pilots who collided with the enemy planes they were shooting at, or crashed into the targets they were strafing on the ground.

Avoiding target fixation is as easy as erasing an ancient, deeply rooted reaction to danger with one more suited to modern times––which is to say, not that easy at all. But it can be done, and without putting yourself in harm’s way. The trick is to shift your attention away from the thing you don’t want to hit and concentrate instead on a safe path around it. You can practice this with leaves on the road, or patches in the asphalt, so the learning curve doesn’t have such a steep slope of consequences.

When wolves come to our settlements, we can either go insane chasing down every last wolf, or can think coolly and aggressively in terms of how to go around the wolves. This means putting up barriers, scaring them off, and otherwise making it easier for wolves to go their own way than for them to come our way.

Some of this includes ensuring that we hide or destroy our trash, since predators will forage within it. We need strong fences, good guards, and to always be vigilant, because the presence of any wolf among us means a cause for alarm and more importantly, for immediate and swift retaliation. Its crime is not being a wolf, but being near us.

The same is true of diversity and class warfare. We do not need to harm the Other; we need to send them on their way. We do not need to harm the rich, only to make sure that only good people become wealthy. We are not fighting a war of attrition against an enemy; we are fighting a war of construction, trying to build up ourselves so that we may rise above these others and drive them from our borders.

The Right has for too long covered for democracy and egalitarianism. Since we try to preserve things, we try to keep the ship of state, the system, and our societies afloat, despite those being the actual enemy because they are infested with egalitarianism.

Similarly, all of democracy — its endless infighting, its abundant laws, its constant policy debates — serves as a cover story for the idea that egalitarianism is working and can work, when in fact we see that it has doomed our civilization. By blaming the wrong enemy, we let the real malefactor continue to work.

Soon comes a day when the Right will awaken from this stupor. We will realize that equality and meritocracy were never our values, that we have more options than democracy, and that nothing in fair play requires us to tolerate diversity, immigration, globalism and other keywords for “multiculturalism” or the mixing of races, ethnic groups, and social classes.

Instead we will look toward the future, instead of the past, and will simply opt for a society without all of the problems that egalitarianism has brought. We can indeed have an excellent life, building on the past and making it better than ever before, but first we must stop hating the distractions and focus on making ourselves right.