by Jonathan Peter Wilkinson on December 28, 2020 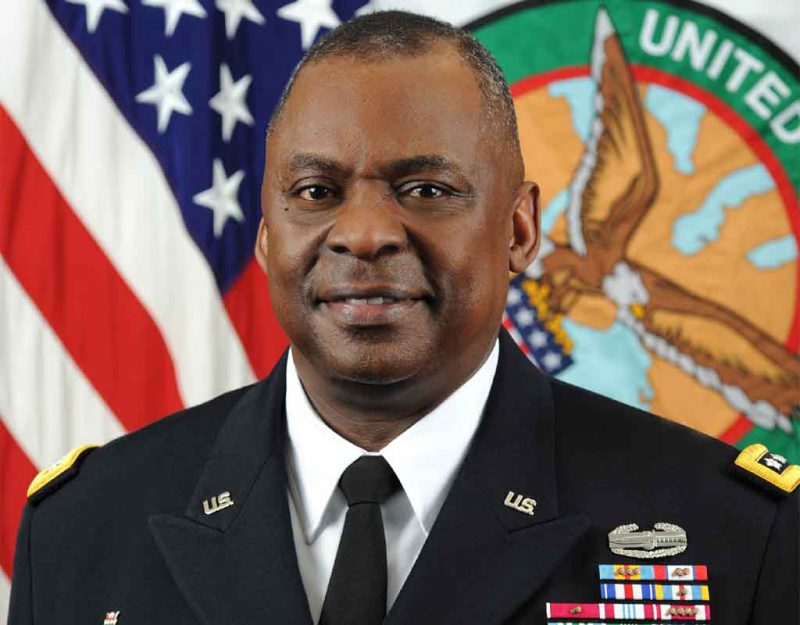 Let’s pretend Amerika is still a Constitutional Republic. In so doing, we should note the following with a certain condign dismay, rather than with a cynical shrug of resignation. Raytheon has chosen Lloyd Austin as Amerika’s next Sec Def. Kudos, btw, to normally-sycophantic Liberal Congresswoman Barbara Lee for rising in abject disgust to the following.

Austin, Biden’s choice to lead the Defense Department, has served on the board of Raytheon Technologies, one of the nation’s largest defense contractors, since 2016. Raytheon, which has $73 billion in pending orders from the federal government, was a major supplier of U.S. arms to Saudi Arabia during its war with Yemen.

It’s amazing how morally fortifying it can be to have a properly functional disgust threshold. To properly understand why Raytheon’s chimp in a green-suit should never be even considered for an important government position, it helps to understand some old Cold War US History that helps inform The Good Congresswoman’s surprisingly decent moral abeyance to President-Select Andropov’s compromised selection for Sec Def.

President Dwight David Eisenhower may have been one of Amerika’s last legitimately patriotic Presidents. He understood more of where our nation came from, and therefore possessed the immense foresight to see some of the bad places we were going. His Valedictory Address ranks with George Washington’s as one of the most brilliant and perspicacious warnings that a powerful Amerikan ever bequeathed to future generations. He predicted decades ago and laid out clearly who Raytheon’s Chimp in a Soldier Suit is dependent upon for bananas. Here is a sage and accurate warning.

We have been compelled to create a permanent armaments industry of vast proportions. Added to this, three and a half million men and women are directly engaged in the defense establishment. We annually spend on military security alone more than the net income of all United States corporations. Now this conjunction of an immense military establishment and a large arms industry is new in the American experience. The total influence — economic, political, even spiritual — is felt in every city, every Statehouse, every office of the Federal government. We recognize the imperative need for this development. Yet, we must not fail to comprehend its grave implications. Our toil, resources, and livelihood are all involved. So is the very structure of our society. In the councils of government, we must guard against the acquisition of unwarranted influence, whether sought or unsought, by the military-industrial complex.

Our overwhelmed government ethics have at least tried to avoid the appearance of working for Raytheon, Boeing, or any other manufacturer of military hardware. One such effort involves Revolving Door Laws. These laws typically ban military members, governmental contractors, or government civilians from joining a contractor immediately after working on their systems for the government. The arrangement works in reverse as well. A person coming from Raytheon to the Federal Government will typically go get made to work stuff from Textron or Northrup Grumman instead. This is an admittedly feeble attempt to stop Martin Marietta from appointing the entire command staff an Air Force Squadron.

It is impossible, ridiculously impossible, to go straight from The Raytheon Board to being Sec Def and recuse yourself from all of Raytheon’s business deals. It would be like putting a corporate board member of Google or Microsoft in charge of Cyber-Security. The CEO of CNN should be similarly exempt from employment by the FCC. This is what governmental economists refer to as regulatory capture via the revolving door.

In many cases, the regulators themselves come from the pool of industry experts and employees, who then return to work in the industry after their government service. This is a version of the system known as the revolving door between public and private interests. In some cases, industry leaders trade the promise of future jobs for regulatory consideration, making revolving doors criminally corrupt.

Now one could point out that Retired General Lloyd Austin served for 40 years in the army. Yet herein lies the rub. He only stopped serving four years ago and then went straight to the boardroom at Raytheon. Send him straight back, and you potentially have a similar situation to the recently “retired” Goldman Sachs bosses writing the TARP bailout in 2008. The optics, if not the ethics themselves, are uglier than a Biden-Harris nude 2021 calendar.

If this were merely President-Select Andropov being the same K-Street slore he’s been for 47 years it would just be bad. But this isn’t just merely bad. This is indicative of how progressives are taking over Amerika. Progressives and utterly corrupt mega-corporations as well; have discovered that there are some jobs that require a strong, !BLACK! Man. One of those jobs involves taking ethical regulatory safeguards and using them to wipe your anus.

But the ethics here are not even the ugliest aspect of this. It’s the corporate marketing. If this were some General White being discussed for Sec Def, then the US Senate would take one look at the timelines on the resume and say come back in two to five years and we could give you a hearing. But those, you see; are white ethics. Raytheon will simply order President-Select Andropov to decry the rigid and unfair application of white ethics to a black nominee. Applying those ethics to General Raytheon here would be !RAYCISS!

Raytheon has a marketing department. They know about the existence of Black Lives Matter and are at least as good as The DNC at leveraging that discontent for amoral fun and profit. Bringing Retired General Austin to The Pentagon four years after he hung up the BDUs is an obvious ethics breech. Wait two years and they’d at least have a valid legalistic argument athwart the antipathetically amoral appearances.

Raytheon doesn’t want to wait two years. They expect to be inaugurated this January. They want the power and the law can suck a bone. You can’t do that as openly and blatantly without the leveraging of racial warfare and the implicit threat of black-on-white urban violence to hold the damn, inconvenient ethics laws at bay. That’s 2021 Amerika. If you don’t like the laws, then get yourself an up-jumped knee-grow to walk point and you may well get to ignore them.

If this is how DC’s paymasters at Faceberg, Raytheon, and Goldsachs intend to run Amerika, then we the people are in for a world of unpleasant prison shower sex in the near future. Sociological and regulatory capture are a sure-fire way to turn Amerika into a neo-feudal Anarcho-Tyranny. This is because the most effective Eichmanns are always the little ones. Sadly, that is exactly what General Lloyd Austin turned himself into when he turned in the hero suit for the Raytheon pin-stripes.