Living In A Disassociated Society 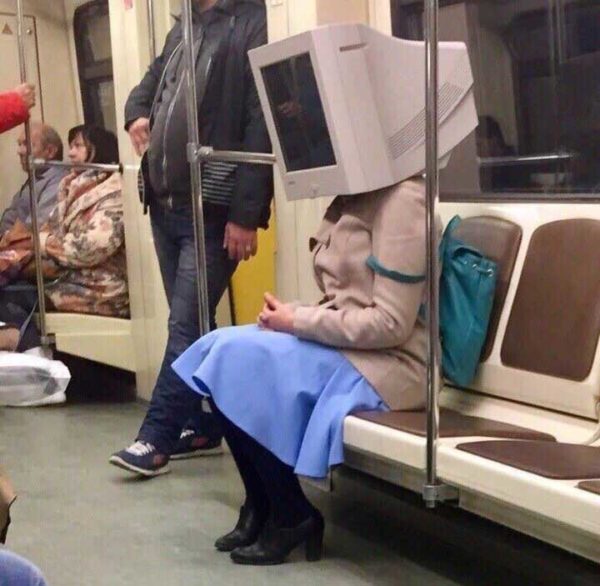 Deconstruction might be the dominant idea of the modern time. Instead of thinking about the connections between things, we pretend they exist in isolation and have no effects beyond themselves, least of all as part of a pattern. This enables us to separate our actions from their consequences and implications.

Another term for deconstruction — in the context of our actions — might be disassociation (also: dissociation). In a psychological context, it refers to the separation of some thinking processes from our main form of consciousness. Part denial, part oblivion, and part solipsism, it explains how people separate from knowledge of traumatizing things:

Dissociation is described as:

1. The splitting off of a group of mental processes from the main body of
consciousness, as in amnesia.
2. The act of separating or state of being separated.
3. The separation into two or more fragments.

Let’s talk about dissociation a minute: It’s technically a defense mechanismâ€”we separate out of our memory things that we don’t want to or can’t deal with. In trauma (like abuse or rape), that’s helpful at the time. If dissociation becomes your major defense mechanism, it can become a full blown dissociative disorder which are very intense types of disorders.

When one lives in a failing society, dissociation becomes necessary because one either thinks about how much everything is failing all of the time, or pushes that to the back of consciousness and dedicates time and energy to other, more specific and immediate, thoughts. This creates a condition like PTSD where stability is maintained through denial, but when reminders appear of the larger reality, terror and emotional confusion sets in.

That crash condition, known as decompensation, happens when the psychological defenses that the person has erected by compartmentalizing difficult truths collapse after the person confronts some data that reveals how their mental outlook does not fully describe reality, and this weakness allows in the denied thoughts.

When people decompensate, it means that they escape the mental disassociative loop in which they have been existing, and since they cannot both feel good about their lives and be aware of what they were denying, they come undone:

to lose the ability to maintain normal or appropriate psychological defenses, sometimes resulting in depression, anxiety, or delusions.

In this way, we can see how disassociation provides a destructive force as a long-term strategy. The denial becomes the first and most important task for the individual, and the denied — or at least avoidance of it, and fear of its image appearing in the mind — rules their lives.

Our society alternates between existing in denial of all problems and, when change is afoot, decompensation that causes panicked, depressive, and self-destructive behavior. When the Trump election shattered the narrative, many people seemed to lose their minds, but this was merely them confronting the collapse of their schema of denial.

Any unstable situation provokes disassociation. This is similar to how it begins in most people, which is by growing up in an unstable home:

Dissociation can become a primary defense mechanism if you grew up in a dysfunctional, abusive, addictive, or violent home. That’s because children can easily get overwhelmed and check outâ€”or dissociateâ€”because they can’t handle whats going on.

In our case, the unstable home is civilization itself. The current incarnation of the West consists of ideas that, in our hearts, we know are broken. Democracy is mob rule, which means that the lowest common denominator always wins. Sexual liberation is legitimized promiscuity, which means that love becomes manipulative. Equality means no hierarchy or social order, which ensures that society sways from trend to trend, never finding a path, always distracting itself from its own emptiness.

We are trauma victims — PTSD style sufferers — of the illogicality of our civilization. None of the notions upon which we base our current civilization actually works, but we must be in denial in order to function, which in turn makes us vulnerable because when cracks appear in the narrative and we see a broader reality peeking through, it destroys our sense of well-being and through that, our self-esteem.

Our situation resembles that of someone in a dream who suddenly stumbles on a reminder of what is real and, because it reveals the dream to be a subset of reality rather than the whole of it, illustrates how the dream is not the full picture, only a symbolic distraction from actuality. A person experiencing that would awake in a cold sweat, feeling threatened and unstable.

In order to feel good about our situation, we must exist in studious denial of the dark abyss under the edifice of justifications upon which we walk. Every now and then, one of the boards fails, and we see for a moment exactly what our world is composed of. This prompts shock, denial, and then scapegoating, as in this case in California of diversity failure:

Tiffany Phommathep, 31, was on her way to drop off their children at school when Neal pulled up next to her and sprayed bullets into her pickup. She told reporters from her hospital bed that she was hit four times in the back and shoulder and once in the stomach.

She said she asked four people for help but none did. One woman told her she “couldn’t help me because she only had a two-seater and she was late for work,” Phommathep said. “That hurt my heart a lot to hear her say that.”

People like to think that we live in an Enlightened Utopia where people help each other because we share those French Revolution values of liberty, friendship, and equality. In reality, the ideals of this Utopia are based on the illusion that people care only about external motivations, and people are mostly trying to avoid the others who are crowding their society with whom they have nothing in common.

In a sensible society, obviously insane people would be exiled or incarcerated before they went on shooting sprees. Instead, we blame guns, and deny the fact that our insistence upon equality means that we have no defense against people who are crazy until they commit an illegal act that is big enough for over-worked law enforcement to care. At that point, the police show up, cover the bodies, and go on the news with statements of how this will not divide us, even though we are already divided.

The human monkeys (humonkeys?) of the talking heads and chattering classes are currently using this case as an excuse to gesture just how shocked they are that anyone could behave this way. In reality, they would do the same if they were in the same position, confronted by someone from their out-group, like maybe a fellow in a MAGA hat and overalls.

Living in denial destroys our self-esteem. We must maintain a lie, and then flail when it is exposed, but at that point, so much of our life has been spent on the lie that we do not feel right until it is restored. To that end, we dredge up the old excuses and rationalizations, lush ourselves out with platitudes, and carry on, dreading the next interruption of the illusion.