Liberalism as a social phenomenon

The danger of universal literacy is that you teach many to read who lack the ability to think. That problem gets compounded when you give them televisions, because then they will repeat what they’re told. If they regard a television talking head, say Glenn Beck or Jon Stewart, as rising above the crowd in intelligence, they’re going to want to be like that person, and so repeat ver batim what they’ve heard. 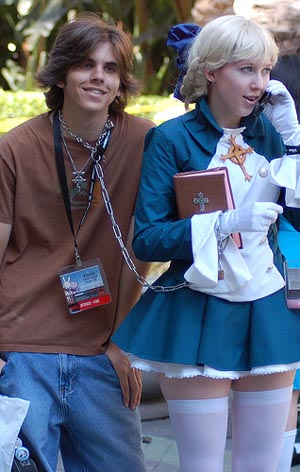 Part of our split between literacy and logic is that, thanks to how we teach subjects in schools, the largest segment of our people believe them to exist as entirely independent entities — in nature. For example, if you label something politics, it’s immediately removed from the domains of psychology, biology and philosophy, at least in the eyes of most of our nu-literates.

This of course blinds us to the oldest human failing: that the reasons that people give for their actions aren’t their actual reasons. If I’m selling you a car, and want to convince you that I’m a good fellow, I might have one of my coworkers trot out a puppy so you can see me petting it. If I’m caught stealing at work, I might try to convince you that I’m a Robin Hood trying to re-distribute wealth to my coworkers.

It’s very difficult to trace the chain of cause to effect, especially when in humans the original cause was a mental notion, a conception of intent. Did I run out of money, see that my neighbor has succeeded in grand larceny, and then have a moment of weakness and steal, only to lie about it when the spotlights caught me with my hand half-withdrawn?

When we look at politics, we’re looking at the effect, not the chain of causes leading up to it. We pick our political opinions because we want our friends to think we’re cool, because of inherent inclinations to stability or lack of obligation, or because we’re hoping to gain something from the system. We then can invent any number of reasons why our demands are rational and provide good things “for everyone.”

So it’s hard to tell the origin behind any political viewpoint just from looking at the viewpoint. But if you peer into the psychology of that viewpoint, and compare the consequences of its ideals to its stated goals, you can often find out what’s really going on.

For example, in liberalism we see a philosophy that demands the highest authority be the individual. Instead of having a king, or strong authority, we have many strong and equal authorities — and a government to support that right, and defend them against the allegedly oppressive upper castes and classes. Liberalism is inherent internationalist, or against national governments, and inherently globalist, or in favor of establishing this alleged freedom worldwide.

When we peek into the psychology behind the demand for absolute freedom and the absolute equality it requires, we see an interesting story. First of all, who needs freedom? What we need is a lack of intervention in the actions we choose that are healthful to ourselves and society as a whole. We don’t need absolute freedom, least of all a “freedom” that makes all of society wait whenever one person is inconvenienced.

It has been said before, but bears saying again, that the psychology of liberalism is simple: a desire to avoid natural selection. In life, we make decisions and then see their consequences unfold before our eyes. At that point, we are open to criticism or failure. Liberalism by making us equal, and the individual the ultimate arbiter of what is correct behavior, removes the consequences for error. It represents a desire to avoid the challenge of life because it can end in failure, or partial failure that opens us to social mockery.

However, liberalism is a meme, and like all memes and language viruses, it has a life of its own. It ends up being abusive to those who carry it. When you depend on an external force to remove the consequences of actions, two things happen. First, you rob yourself of victories, since you didn’t actually challenge yourself. Second, you make yourself dependent on that external affirmation, which means that your self-esteem waxes and wanes with the opinions of others — the exact opposite of “freedom.”

True, you always have the ability to challenge yourself by climbing mountains, writing novels, making music, or so on. But these must be done in ways that do not challenge the prevailing mindset, nor introduce a form of reality that others find offensive. Here, too, they have clipped your wings, because under liberalism there is a group dogma that presumes to be absolute knowledge, therefore it does not tolerate dissent.

Person 1: I think the earth is round.

Person 2: How dare you offend me and the common decency of our people?

You can see how this thinking leads to passive aggression. In this scenario, it is assumed that “all of us” agree when in fact no such agreement exists, and no proof for it has been offered. Instead, it is used as a weapon against those who disagree: for offering an opinion, they are portrayed as violating what “all of us” know and the standards of a society that is in fact not organized around any such standards. It’s a defensive move that benefits those who fear they might be wrong.

Our passivity extends to all aspects of modern culture, but not before. For example, most of our movies follow the basic plot line of the brilliantly cretinous recombination of cliches that was The Matrix: modern man has trouble adapting, finally figures out with the help of a Christ figure that he is the victim of a vast conspiracy by government and corporations to control him, so he fights back and discovers that he and his cohorts can overthrow the oppression and invent a new world.

Only problem: the “oppression” in reality does not come from a central source, but from many people acting selfishly, and most of them being incompetent, dishonest or deceptive. As a result, we’ve made a society of parasites who when attacked, retaliate with passive aggression which our mandate to absolute, universal individual freedom then defends. There’s no way to stop them. In addition, there’s no way to stop such a society from growing and consuming all of its resources, because saying NO to any individual violates their rights. Such a society is a cancer on itself and its environment.