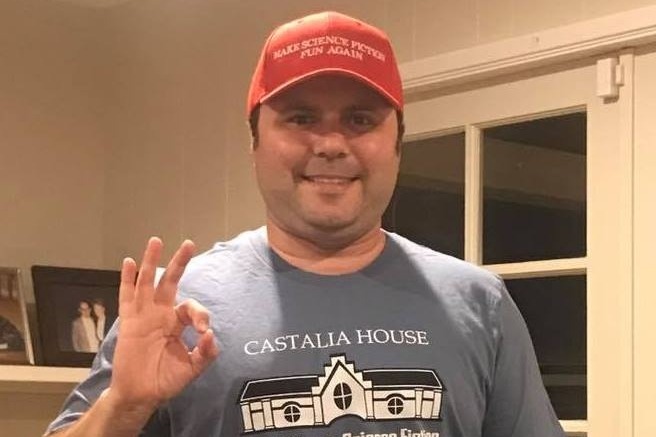 Sci-Fi author Jon Del Arroz was barred from the World Science Fiction Convention for his allegedly Right-wing views despite being a rising science fiction author. His response? He has sued the convention, pointing out that they are a public entity that is discriminating unfairly against conservative authors.

At the GoFundMe site for the suit, Del Arroz describes what happened and why his response is necessary:

A month ago, the World Science Fiction Convention made an unprecedented move in pre-banning me from the convention–something they haven’t done since 1964, which they only did then with a convicted child molester, Walter Breen, and with him, only for one day, not for the whole convention. To be treated with less human dignity than a pedophile is horrific enough, as I’ve committed no crime, but their excuses for treating me in this manner were nebulous, holding me to a different standard than other attendees for no other reason other than because I am an outspoken political figure.

Most of you know me from conventions, and also know that Iâ€™m a fun person to be around, whoâ€™s never caused a problem or even been accused of such. Iâ€™ve attended dozens over the years, including Worldcon itself, without ever having an issue with anyone. Iâ€™m a loving, accepting guy who is truly passionate about science fiction and cares about others. Thatâ€™s what makes this all the more bizarre, and why itâ€™s obviously due to a political motivation.

Conservative-libertarians have been targeted in culture with blacklisting, hate, threats of violence, harassment, and worse. As the original article on this matter in PJ Media stated, I’ve already suffered death threats, having my young children harassed on the internet through people trying to harass me into silence. I’ve also had a strange packages sent to my house with lewd objects, again something doubly frightening because I have young children. Science fiction professionals have tried to hate me out of the field, running whisper campaigns against me to try to make sure people don’t communicate with me — hurting my business as it even got to my cover artist on For Steam And Country. The hateful lies and names uttered about me have been very difficult to bear, but I’ve persevered as best as I can.

Threats to conservative-libertarians have a occurred at conventions across this great nation as of late, against not just me, but others who share my identity: Richard C. Meyer, a prominent youtube comic reviewer was threatened by industry professionals in a secret Facebook group, ,as they conspired to frame him for a crime at New York Comic Con. Kevin Sorbo, the popular actor, was banned from East Coast Comic Con. Threats to my safety and to others are real, and growing in number.

One of my first writing lectures I attended as I learned my craft was by David Gerrold back in 2012. He inspired me greatly in an argument he made in favor of gay marriage, presented in a manner beautiful that nearly moved me to tears. In that speech, he said that gay rights would eventually prevail because for them, it was life and death, and for the opposition, it really didn’t impact them personally. The message was clear: it matters more to you, if you care about a cause, if you care about freedom, then you will prevail.

His words especially inspired me my fight for the right to have my own career in science fiction, for my own freedom, and for my own safety in this industry. We have to make sure science fiction is a place where ideas can be written, where the future can be molded into a diverse and inclusive place. Which is why I do what i do on a daily basis. Conservative-libertarian ideas are blacklisted, and though I did not desire to become the face of those ideas, events have proceeded because of the bigotry involved in places like WorldCon and SFWA that I must speak out on the behalf of not just myself, but hundreds of other writers who do live in fear of these hate mobs that try to destroy peopleâ€™s lives. For the sake of these peopleâ€™s careers and lives, we must triumph together, we cannot allow the bullies to force good people out of the industry.

But I need your help to accomplish making fandom inclusive again, and creating a safe space for us all to enjoy science fiction together.

I tried to resolve this by talking, but the chair of Wolrdcon would not speak with me or elaborate as to why I was banned. My attorney then sent a letter (which I’ve attached) with very reasonable demands, and I did not receive word back. Worldcon has not responded, not engaged in a dialogue with me at all, including back to my initial letter of concern for safety of other conservative authors back in November 2017. They made their ban over hatred and fear of the other, and made it clear through their actions that they illegally discriminated against Conservative-libertarians who speak out. They’ll defame people they don’t agree with, and this must change.

Today I’m launching a GoFundMe to raise the funds necessary to take legal action, just as was done for gay marriage when people wouldn’t listen. Now in culture, this needs to be done for people who identify as Conservative-libertarian. We must be allowed t o attend professional conferences without fear of injury, must be allowed to have our stories shared, and allowed to speak freely. The State of California, through their Unruh Act has taken action to ensure we are all equal — and this needs to be applied to our cultural institutions in science fiction as we’ve exhausted all other options.

This is where you can help. Tomorrow I’m going to go public with my lawsuit to ensure fairness and inclusivity at Worldcon for all. Share this information and my link, spread the word. Many of you, my friends, are well respected people in the science fiction community, and your word carries much weight. Together we can make change for a hopeful future of love, tolerance, and diversity of ideas, as the founders of science fiction would have always wanted.

He included the attorney demand letter to Worldcon which has more juicy details. The theme for this week seems to involve voices on the Right fighting back with legal action against these supposedly “public” entities who are in fact gatekeeping for Leftism.

Save Your Tribe | Sexbots Harm Society