It is not just Arabs; the Other hates you and wants to replace you. 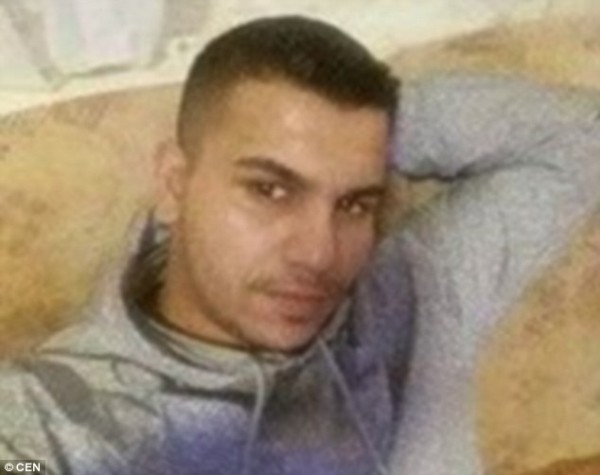 Meet Bosko Pavlovic. From Serbia, he is accused of being part of a rape gang in Germany. The Daily Mail reports:

A 14-year-old schoolgirl was allegedly raped by a Serbian gang of migrants in Germany who also reportedly filmed the horrific act.

The girl, who cannot be named for legal reasons, had been invited back home by another older Serbian girl, 15, who was allegedly part of the group.

Instead of helping her, the 15-year-old girl filmed the sickening ordeal for the Serbian gang, whose ages ranged from 14 to 21.

This girl may not be the sharpest knife in the drawer, but this assault illustrates a fact of life that was once accepted as common sense: other groups, no matter who they are, want to kill you and take your stuff because you are Other to them.

It has zero to do with how nice you are, how much welfare or foreign aid you give them, or your own socioeconomic status. You are Other; that makes you a threat to Us, whoever Us is, and therefore you must be conquered by any means necessary. That includes war, but also crime, politics, corruption, and rape.

Too much of our focus in the West is taken up with Arabs and, in the USA, African-Americans. The reason for this is that people want to believe our diverse internationalist liberal democratic oligarchy (D.I.L.D.O.) is actually a functional system, except for those nasty ghetto-dwellers and Islamic fundamentalists.

The reality is that diversity does not work because every group is threatened by the Other and wants to destroy the Other and take its place. It just seems to work at first when the diversity numbers are low and so each group is not empowered to act as a bloc. But once the minorities are majorities, wow, watch the crisis fly.

If anything, African-Americans show restraint in America because they’ve grown up around friendly white people who help out when they can, and African-Americans share some political identity with other Americans. While ethnic tensions are rising, our liberal media finds it acceptable to cover these in order to cover up the bigger problem which is that there are many minority groups, and to each of them we white Americans are Other.

In addition, to them all other groups are Other, too. In my city, Hispanics and African-Americans war on each other, which is not news; I saw this in California years ago, where the press suppressed it as well. But you can also find Hispanics at war with Indians, Orientals and Arabs. And those groups with each other. In fact, thanks to diversity, every known pairing of ethnic antagonism has played out here, mainly because different groups are incompatible.

If you ask a Leftist to name diversity success stories, they will always mention places with low actual diversity: London, for example. They do this because when diversity means a few individuals, the inherent and unavoidable problems of diversity remain invisible. Once populations are large enough to be in conflict, the true nature emerges.

The truth of it is that diversity fails for obvious reasons: groups need identity and the ability to have their own standards and self-determination. This is why nations, ethnies and races formed in the first place, and why most people stay in their home countries even when impoverished. Only Western liberal democracy, which demands that we demonstrate how people are equal by engaging in sociopathic and suicidal failed policies like diversity, denies this reality.

The ugly pathology behind diversity is that Leftists adore the idea of regression to the lowest common denominator. In fact, it is the goal of egalitarianism to do so. That way, individual Leftists cannot be seen as mediocre, and in the social chaos that it has created, Leftist individualists can do whatever they want and not come into conflict with pesky social mores, cultural standards, morals and values. Leftists want anarchy because as individuals they want to transgress civilizational norms of behavior.

As a result, they keep pushing democracy on us. When it fails, they find a group to throw under the bus. At first it was whites, but now the Left is increasingly willing to toss African-Americans and Arabs under the wheels so that the Left can keep importing Orientals (high Asians), Vietnamese/Thai (low Asians), North Africans and Indians (Caucasian mixes), Central and South Americans (low Asians: Siberians), and any other group that will adulterate our population. They do not care who the group is, only that they can use this group to destroy us and remove those social standards.

Leftists are insane because they ignore the destruction of civilization their policies will accelerate, not because they are not deliberate. There is a plan. The target is Us, and the implement is any Other group that can be found. The goal is to abolish civilization so Leftists can run amok and engage in whatever crass, venal, greedy, perverse and neurotic behaviors they desire. And in the end, only a ruin will remain.

The ultimate legacy of SJW Pope Francis | The loveliness of boats