by Wilhelm Bartholomew III on October 9, 2017 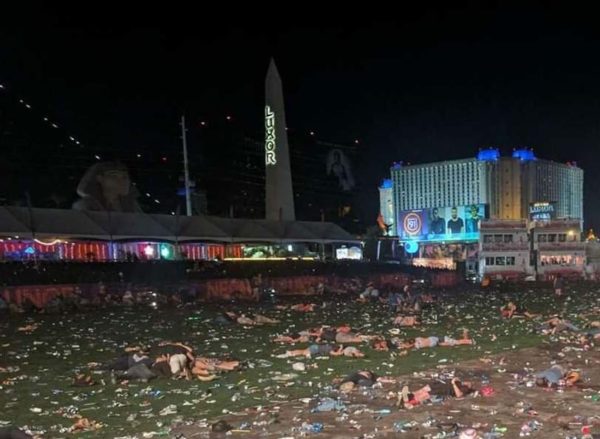 The official narrative attempts to do a few things at once: it wants to convince you that everything is under control, that the bad guys are who government says they are, that government is in control and not a deep state or organized crime, and that you should feel bad about something you are manipulated to support something else. The video evidence from the Las Vegas massacre shows us that the narrative is hiding the truth.

This footage shows flash bangs throughout the video, but they are not where the government is telling you to look at the Mandalay Bay Hotel, which is to the lower center-left of our map. And they are not in a hotel room. Instead, the video showsÂ fairly obvious recurring muzzle flashes from multiple shooters moving from the left to the right in the dark while firing. They eventually wind up at the Delgado hotel elevator shaft, then escape.

These flashesÂ start to the right of Mandalay Bay in the extremely dark area in between it and the hotel at right (the Delgado). Because that area is so dark it is very easy to see the flashes. Unlike the Mandalay windows, there are no billboard lights reflecting there. Look about halfway up in between the two hotels.

Starting at the two second mark and lasting until the six second mark, the flashes move from left to the right, possibly suggesting that a suppressor is used to cut down on light and noise. That is just one shooter. The crowd does not react en masse yet. I believe these first shotsÂ show thisÂ was probably the leader. Some say these first shots either targeted the aviation fuel depot, or were test shots to check trajectory. I believe this first shooter was testing to see if shots would be fired back, and to perch in the Delgado elevator shaft, where he could provide cover for the next group of assailants to follow his lead.Â Shots continue from the Delgado elevator shaft later in the video as he keeps that position.Â 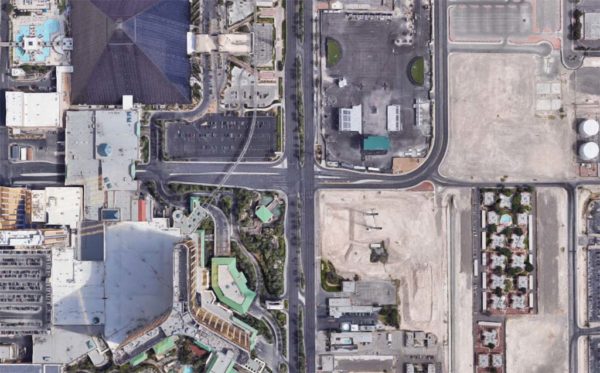 Then, at the 3:05 minute mark, you see more flashes in that same area, again moving from the left to right, starting to the right of Mandalay, and proceeding towards the Delgado elevator shaft. Emboldened by having cover fire from Delgado, with no one returning any fire, the shooter opens up in full, and you see many more flashes this time. They are longer bursts. And the audio matches. The crowd reacts and flees. This was the main barrage. Survivor posts mentioned someone let off firecrackers by the stage as a distraction at this point.

At the roughly 6:52 mark the cam gets shaky. But this is the key moment actually. To a large extent, itÂ was the grand finale. If you maintain your focus on that area in between the buildings, you see that this was the grand finale. Many flashes from multiple positions fireÂ off nearly simultaneously, to where it could not be just one person possibly.Â Flashes also appear on top of the Luxor Tower at one point in the video (7:05). ThatÂ goes along with the well known taxi cab driver’sÂ video, where that sniper was pointed out.

The only flashes from Mandalay are a few rounds from the roof at one point. But theÂ center point of this attack was between Mandalay and the Delgado, and that dark area in between. TheÂ Excalibur hotel isÂ back there actually. And if my memory serves from when IÂ used to frequent Vegas, there is a tunnel connecting the hotels, and possibly a tram. There are also parking structures in the area.

There is also a video on YouTube showing a security guard blasting concert goers from the concert floor, as well as testimony from a victim. Because there were so many perps simultaneously at this event, the audio doesn’t always match. The main thing the audio shows you is that many different guns were going off at the same time, not just one attacker’s at a time.

Some have responded that they believe these flashes between Mandalay and Delgado are actually just planes or helicopters, not shooters. The problem with that is thatÂ whatever it is, it never appears to left of Mandalay, or right of Delgado, only in between.Â So unless they are flying from one wormhole into another like on Star Trek this is not possible. Note that the flashes in that dark areaÂ between Mandalay and Delgado never retrace fromÂ the right to the left.Â That is why I say there were three attackers at least. Because each major volley moves left to right but never retraces.Â Again, I speak of the two second mark, 3:05 mark, and 6:52 marks (respectively).

The other problemÂ with that is the helicopters and airplanes are required by law to have three lights each, which these doÂ not. And planes blink at an even rate. And helicopters do not light up at fast multiple flashes like a machine gun. Even if it was a helicopter, which its not, why is the police helicopter on scene at the two second mark before any shooting. And if it were a helicopter, it is not good that the flashes came from it, since helicopters can carry the type ofÂ machine guns that could waste a crowd with this proficiency, like they did in Vietnam.Â A mounted machine gun like that with the bullets on a belt like thing from a helicopter would shred the crowd like this. There is also the outside possibility of a drone attack, which 4Chan boards have discussed. Recent YouTube videos have demoed civilian made drones like this. The government has the drones for sure.

I saw a plane and a helicopter in the background at other points in the videos which were unrelated to the muzzle flashes, and proceeded along natural flight paths. It is possible to the difference between a plane/helicopter and gun flash. Believe it or not, the difference is obvious to the human eye.Â

I could go into more conspiracies regarding this attack, many of which I have heavily researched. The Paddock guy having made $5 million gambling without any IRS scrutiny is totally a joke. The attack was a copycat of the ISIS Paris concert shooting, followed by the Belgium bombing. The killer in Las Vegas even had the bomb ready in his car too, and initially planned to escape, further mirroring Paris. The media is in denial about this cloned ISIS attack. All those Paddock cruises to the Middle East look very suspicious now.

Really, I am going to stick with what you can see in this video with your own eyes, if you set aside innuendos and misdirection, deflection and distraction from authority figures. This was not staged with crisis actors; I personally know aÂ radiologist who treated a victim from this with a nasty shrapnel wound. The hospitals in Vegas having been so full, the lady actually flew to her home state with the shrapnel embedded in her. Those bullets fragment on impact to shred human tissue. I care about this event because I used to patronize Vegas and Reno a lot. I was invited to Vegas with a free ticket and room for a party that weekend, but declined since the major cities have all been in turmoil. My girlfriend and her sister were inÂ Vegas that night. This stuff is real, and it hits close to home.Â Â

Any way you cut it, this attack actually resembles the team of armed terrorists from the first Die HardÂ film. Shooting down, moving in teams,Â andÂ providing cover for each other makes sense. It does not resemble the lone gunman theory that the government wants you to believe.Â