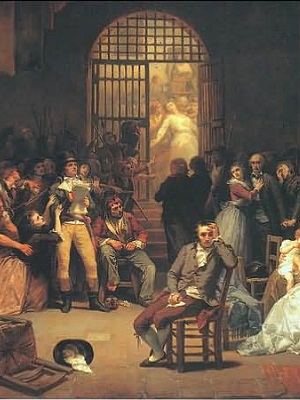 An eternal battle cry rings out across America and Europe: be my prole now.

Ever since we did away with the idea of a hierarchy of natural ability in 1789, and replaced it with the notion that he or she who “works hard” deserves to get ahead, we made our new religion out of money.

We rejected the old idea that nature had an order, and that by following that order, we transcended our own animal impulses and rose above the stupidity to make life beautiful. At the end of that idea was the sense that if we really reached out with transcendence, we lived with the holy within us, and became part of something eternal, whether tangible or not.

But the old idea is new again, because the “new” idea was even older. In fact, it pre-dates civilization. It is the idea that we are as individuals little civilizations in ourselves, and that we need nothing but a grocery store. This idea arises in wealthy places; people assume that what is will always be, and that it does not require people to strive for its creation, renewal and maintenance.

The new old idea put proles on the levels of kings. It forgot that the qualities that are hardest to measure — judgment, leadership, divinity of aesthetics, clarity of purpose, nobility of intent — are not equally distributed, nor are other important ones like intelligence. But if we dumb down our standards, everyone can be accepted.

For this reason, we live in a society of incompetents. Our doctors are not people of wisdom; they’re people who puked their way through enough school to memorize enough facts to pass a test. Most people working in jobs are not really suited for desk work; they are barely able to execute the tasks a competent clerk would have breezed through a century ago. Our modern proles like to assume that because they operate computers, they’re somehow smarter than their ancestors. This is while attending jobs that require a half-hour of actual work a day, padded with hours of meetings, internal paperwork, presentations, training and other make-work.

The final extension of this is the religious fanaticism that people have for immigration. When we did away with hereditary roles, we cast everyone out of certain places; society does not “need” anyone anymore. You have to make yourself fit in and do whatever it is, even if you’re not good at it. The result is the crab bucket of contemporary lore: people climbing over each other trying to get to the top. What they want to say to others is “you’re my serf now, and I rise above you.”

The most vicious social climbers tend to be liberals, because they tend to be liberal in order to make other people think they’re “nice” and “enlightened.” Their politics are their advertising. They love to have people beneath them. If they wanted equality, they would not insist on us importing people to do manual labor. They want lawn people who are cheap, so they can give them a cheap tip and feel like extravagant, grandiloquent, benevolent and expansively generous kings — for the low price of a few dollars.

We have said it before on this blog, but it bears repeating: the Western obsession with multiculturalism is an extension of its class warfare dating back to 1789, and it represents lower-caste white people using third-world people as a social excuse to be corrupt. Their goal is to make themselves look good. What happens to these other people is not their concern.

Until you understand this basis for the Western obsession with “diversity,” it remains an enigma, since there is no reason for it other than cheap labor. The answer is that the cheap labor also provide abundant objects of pity to make former white trailer-dwellers feel like they always belonged on Fifth Avenue, surfeit in wealth and full of pretense of a bright future.