Human Sacrifice In The Dying Cities 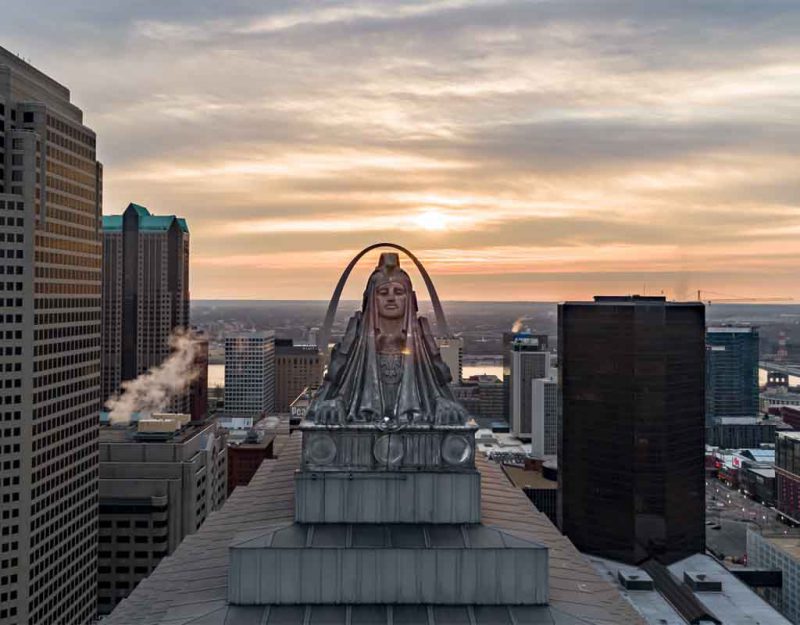 One of John Wayne’s better lines went “Life is tough. It’s tougher when you’re stupid.” There’s something that can also make it more attenuated. That something is having dishonest and avaricious people use the stupid people and then chuck them out with the garbage when they are done serving any utility.

The Solipsist fails to see the problem here. As long as you know which guy is the rube at life’s poker table, you are not it. Having some miserable slob kick the bucket in social welfare state sportsball just means more of other people’s money for me. Except for just one thing. The solipsist is too myopic to see the real game. The current anarchy is what fuels Anarcho-Tyranny.

These people dying in the aftermath of our BLM Summer are not collateral damage. They are the sick equivalent of firewood. This is human sacrifice to the Nu-Moloch of political ideology. What human sacrifice? That, right there; is paranoid. Yes, but is it paranoid enough?

The (((Journolists))) reporting this do all in their power to employ Sociology in the cause of obfuscation.

These communities — already facing structural racism and barriers to opportunities — are now dealing with huge added causes of stress, Daniel Webster, director of the Johns Hopkins Center for Gun Policy and Research, said. Ronnie Dunn, a professor of urban policy at Cleveland State University, called the surge in bloodshed “a perfect storm, a confluence of events that exposed all the societal inequities that exist.”

If we want to discuss what gets exposed here, the Leftist I’d listen to on this doesn’t “teach” at Cleveland State Kindergarten. Warren Buffett’s old comment on hard times rings true. “You don’t know who’s swimming naked until the tide goes out.” Those guys “swimming naked” are truly the rubes at life’s poker table. They are only getting taken to the cleaners to pick up nice funeral attire on the way to the mortuary.

So what makes somebody that rube at Life’s Iniquitous Poker Table? Start with deracination. Much acculaturation and socialization that is passed gets passed on via the family like an estate. It goes right on down the family line – father to son, mother to daughter. Acculturation and socialization make civilization possible. Perhaps an iron maxim of law enforcement is that the fewer laws you need, the easier it is to police. Another one could be that fvcked-up people do fvcked-up things.

The current Managerial State in Amerika has hit a tipping point in places where it is beyond policing. It needs too many laws to control too many failed human beings. It’s kindergarten for the destructive 250lb addict on Fentanyl. When the tide goes out, there are some really gross looking things getting left stranded on the beach.

The people who run Life’s Poker Game don’t want it left up to pure happenstance. Just how random are the Red-Dawg tables at MGM Grand? Only as random as they need to be to rope in the fools and adrenaline junkies. So how does one rig Life’s Poker Game? Selectively target the families of the people that you want to have ending up the rubes. Lyndon Baines Johnson, you malignant Tanner’s Bastard.

The welfare legislation he rammed through congress was the piece de resistance that cemented the well-deserved, sulphurous legacy that clings to his career of evil. He deliberately cultivated his programs such as AFDC to create a client of servile dependency. His bastard bounty welfare programs wrecked havoc on the structure of lower income familes and reduced them to peasantry.

This establishes a peasant levy to order around in a manner reminiscent of Snidely Whiplash. What does this peasant levy accomplish for it’s hateful Kakistocracy of the modern Anarcho-Tyranny? It fuels and empowers them.

LBJ’s boast regarding his Great Society welfare initiative speaks volumes of how Liberals truly think of race and humanity.

“I’ll have those [African-Americans] voting Democratic for the next 200 years.” (Said) Lyndon Baines Johnson about the Great Society plan.

And they can also riot, picket, complain, block freeways, and throw sand in the gears in the wheels of a nation anytime their feudal overlords of The Leftist Manor order them into the streets. They can die and be held up as false icons. They can be used as megaphones to scream for your degradation and submission.

Just make sure they never have any agency. You can give Bron-Bron lots of cool foo-foo toys; but when he needs to work for China, you jerk his chain the way it was done to Kunta-Kinte. Remind the little sh!t he works for the (((NBA))) whenever he starts to go a bit froggy. Keep them ignorant to the fact that *Bling*.DNE.Power. The ones smart enough to catch on will burn with a super-nova star’s worth of distilled hatred. Kanye West and Candace Owens have both internalized that logical relation. All they’ve worked for in climbing the ladder gives them nothing except the opportunity to knee-grow in the MSNBC house instead of the fields of Ferguson. They could be seen as souls on fire.

Men are free to the extent to which they are based and functional. Freedom you are too much of a screw-up to effectively leverage does not benefit you. The Anarcho-Tyrant does not want you stable. It’s far more than just statues that are going off their pedestal. The goal of all of the violence is the end of predictability. If they can’t *make* me adopt the high time preference they would prefer I have, they can make it too chaotic and foggy to see ahead well enough to plan.

The Anarcho-Tyrant cannot make you stupid. But they can make being intelligent less advantageous by destroying the conditions that enable ratiocination to become a force-multiplier. The Anarcho-Tyrant can make your life harder. This is why we are made to care when BLM randomly guns down 8 Year-Old girls when Mom and Dad try to turn the car around in the BLM Knee-Grow No-Go-Zone. We know it won’t be the shootist who pays for the crime. It never is.

The 8 Year-Old girl is now an icon used to induce the feelz. Induce the feelz and you can induce the stupidz. Induce the stupidz, and life just keeps getting harder. This is exactly how the Anarcho-Tyrant rules. Toss a few more homicide-logs on the bonfire of our current civilization. It will eventually burn away anything that resists the Anarcho-Tyrant. It’s not guns killing all those people in Chicago, Atlanta or Mogadishu, Minnesota.