Extreme politics: the action taken by those who care about our future but believe conventional politics cannot stop its decline, so we must seek other, often taboo, options like anarchy, greenism, libertarianism, nationalism, communism and fascism. 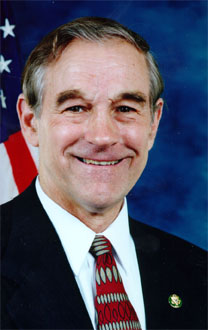 Although the idea of an independent candidate makes most laugh, Ron Paul has redefined the political spectrum with his candidacy. While Paul is running as a GOP candidate, that does not obscure the position that he takes, which is clearly beyond what either major party can accept. He is for all practical purposes an indepedent.

We laugh at independents because we know that most Americans have taken one side or the other, and use that idea set as common ground with others to drum up public support for their businesses, personalities, films and books. You can convince anyone you’re a friendly good guy by being liberal and permissive, or convince those experienced enough to be cynical that you’re a realist by drawing a clear line between what’s acceptable and not. It’s more than a political view; it’s a definition of your personality, and a reflection of the audience to which you want to appeal. In a more cynical statement, we want liberal neighbors and conservative bankers and lawyers, because those are the personalities who either leave us alone or work carefully with our money, respectively.

With this in mind, Paul’s success is nothing short of amazing. Candidates like Nader and Badnarik appeal to a small few who are already alienated, but scare off most voters because the single-minded single-solution approach they have taken does not address a range of problems. Paul took basic conservative values, and applied to them a traditionalist twist as interpreted through the mechanism of modern libertarianism. He is both recognizably part of something we would like, which is a solid and moral conservative leader, and a bridge to a new way of thinking about government.

This new method relies not on dividing the political spectrum into good and bad, and fighting the bad while promoting the image of the good, but on removing the easy breeding ground for behavior that leads to bad. While conventional Republican doctrine is that we must fight bad, and liberal doctrine is that bad is misunderstood and need more nurturing, Paul’s doctrine is that bad arises where the good give it space. He suggests we strengthen the good by eliminating their bureaucratic responsibility to support the breeding ground for bad. It’s more akin to natural selection than the Nanny State created by most Republicans.

While at first it seems relentlessly pro-capitalist, Paul’s theory reduces capitalism to a means to an end, with his outright attack on usury culture and the form of moral inattention that allows large corporations to strike from behind government as a shield in the name of civil rights. He suggests instead making the individual less obligated to those corporations, thus removing their shield, while cutting out the illusion that government is here to help. By doing so, he makes capitalism secondary to the question of individual survival and the ability for the smarter among us to escape the rest.

We could then construe Paul’s division of the world into smarter and less smart, and honest and parasitic, and see his basic statement as an unwillingness to support parasites — or the well-intentioned bureaucracy that comes about through our fight for good versus evil. He knows that the more territory a government commands, the broader the lowest common denominator gets, and because there is a single entity trying to provide for all this people, how rapidly government becomes a defender of the broadest rights to existence. In effect, this makes it support parasites and crusade against biologically more intelligent people who will naturally try to escape the masses of clueless television zombies.

In this sense, Paul is not only a defender of the oldest form of conservatism, which encourages not commerce but a strong positive leadership, but is also an endorser of indirect soft eugenics. Allow natural selection to work for us, Paul hints, and the endless stream of criminals both white collar and street level will slacken, because what they rely on is a society of chumps who will defend their right to do nothing of import and excuse their criminality in the name of fighting good and evil.

Garden variety libertarianism has never reached this level of clarity because it focuses too much on the good/evil split of personal and civil rights, insisting on increasing those to absurd degrees while ignoring the fact that giving good people rights equally gives those rights to bad people, who will then wreak havoc as best they can. Paul’s Libertarianism is focused less on rights than a single right: that of honest, intelligent people to use their income to support their own families instead of the breeding of proto-criminal idiots.

When we see this clearly, it becomes obvious that Ron Paul, like the best of politicians who unite opposing factions into a singularity, is an alternative to the left/right split of American politics. He is conservative but unwilling to moralize over individual behavior because he believes that nature will sort out what morality cannot. Let the individual do what he or she wants, Paul’s theory goes, because those who act according to conservative values will prosper and the others will fade away. Avoid worrying about both fighting evil, and defending the rights of those who want to behave like idiots; let the natural consequences of their actions judge them.

What right and left have been able to agree on, over the past thirty years, is that our present path is fraught with error because we are ruled by cynical, corrupt and avaricious corporations and bad government. Both sides agree that localization, or smaller local governments handling problems, is superior to a large federal bureaucracy trying to come up with one average solution for 300 million people of different regions, cultures, intelligences, values and goals. This is why natural selection localized libertarianism of a less-than-embracing attitude toward capitalism has infused the extremes of both left and right.

For example, when we look at the National Anarchist parties gaining precedence worldwide, we see people who are basically liberal in outlook but have come to believe that a localized, national state is the best way to defend their culture. The rise of nationalist Bolshevik parties in Russia also shows this “third way,” and more of these leftists are endorsing a Paul-style post-dogma doctrine: do not crusade against evils, but give them no subsidy at the expense of the rest of society through the mechanism of the bureaucratic state.

On the far right, the only interesting activity has been the rise of the Libertarian National Socialist Green Party, a pre-Paulite conservative libertarian outfit, and the change of the American National Socialist Worker’s Party toward a “traditionalist” outlook that emphasizes cutting ties with the parasitic and nurturing the best of an organic population toward a localized, ethnic-cultural state. In these changes, we see the far right drifting away from the idea of constant warfare against an enemy toward a doctrine of defending the best against the obligation to support the potentially parasitic.

Another way of looking at this is to divide society not between haves and have-nots, but between those with the personal organization and intelligence to be haves, and those who lack these probably biological traits. The former can rise given a chance to show their abilities, while the latter are not composed enough to ever rise, and so will always try to find ways to invent obligations of the former group to subsidize the latter. The potential haves know they are outnumbered, so instead of tackling the potential have-nots directly, they’re cutting them out of the benefits plan.

This allows those who are personally organized, intelligent and driven to build for themselves a nice life and to have happy, healthy families. They don’t want to wage war against the potential have-nots, but they also don’t want to spend their tax money on keeping these people alive to cause trouble. Let nature sort it out. If the potential have-nots are able to organize themselves into a society, and support themselves, they then become potential haves and eliminate their own threat potential. If not, well, who wants to pay for those who will then turn against us? Support the best and ignore the rest.

In running for president, Ron Paul acknowledges that he has a slight chance of winning. What matters more than winning the public show of the presidency, however, is in winning the hearts and minds of the smart people in our television-and-minivan-blighted nation, and convincing them that a politics of denying the support of idiots through Nanny State bureaucracy is more productive than another war against potential have-nots in the style of the war on terror, the war on drugs and the war on crime.

Instead of another misdirected war, Paul tells us, we should return to the roots of conservatism, which is a connection to nature and the natural process. That he has communicated this to so many, and united supporters from both left and right, is the real triumph of Ron Paul’s candidacy and surpasses anything that can be done in a single presidential election.