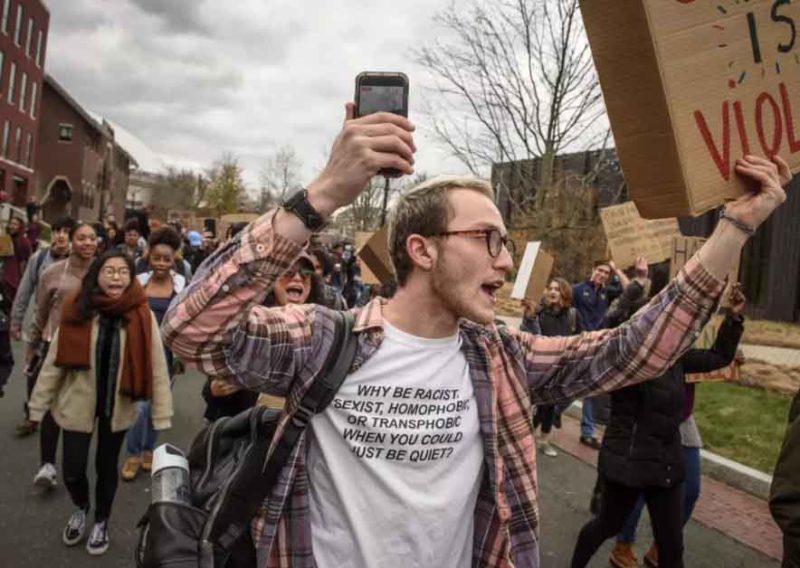 They warned us about democracy. If you allow everyone to have a vote, only the lowest common denominator will win. We thought we knew better, and that whatever happened in Athens would not happen to us. It must surely have been a coincidence that their civilization collapsed after democracy. We consoled ourselves with this hope.

As it turns out, once Leftists get power, they work like a gang or cult to subvert anything strong and good and replace it with horrors. They do this so that they remain in power, so that their own bad deeds do not get recognized, and so that they are not lowered in social status for their venal behavior.

American conservatives, always trying to be “reasonable,” gave up power and rationalized it by saying that at least they would have the freedom to work hard, pray hard, and support the military and business. As it turns out, the Left simply said “thank you very much” and used the strength created by that practice to further propel Leftism.

Now the people who made this country and made it strong, as in Europe, find themselves marginalized. Like fast food, Leftism is intellectual junk calories but extremely seductive. Those who work in government, media, academia, and large swathes of industry are Leftist, and for the past fifty years they have excluded all who are not.

If you wonder what being an occupied people — Southerners and Germans do not have to wonder — is like, consider that our legal system refuses to convict people caught on video vandalizing historic statues:

One day after a judge tossed charges against two suspects accused of toppling a Confederate monument last summer and found a third defendant not guilty, Durham County prosecutors on Tuesday announced that they were dropping all charges against the remaining five suspects.

“I do believe the evidence supported the misdemeanor charges, and we proceeded on those charges,” Echols said. “Acts of vandalism, regardless of noble intent, are still violations of law.”

But Echols added that it would not be productive to pursue charges against the remaining five defendants given that prosecutors’ evidence for them was similar to that presented during Monday’s trials. The remaining defendants had been scheduled to return to court in April for their day in court.

The judge refused to proceed with the charges against these defendants, and since all of the evidence was the same, there was no point pursuing the case. So who is this judge? Judge Fred S. Battaglia, Jr. is a diehard Leftist who opposes the Western European majority, which influenced his decision:

District Court Judge Fred Battaglia Jr. pointed to Trabia, a small town east of Palermo, Sicily on the map in his his office. Itâ€™s where his family originally came from. â€œMy great-grandparents came over in a boat. It took 30 days and there were a lot of hardships,â€ he said. â€œI have great grandparents Iâ€™ve never met but I owe them a debt I can never repay because they left everything to come over here.â€

Because Sicily is very poor, Battaglia said he feels a connection and a desire to help â€œthe poor, the underserved and the underdogsâ€ in Durham County. During his 29 years in private practice, Battaglia advocated for that segment of the population.

…â€œItâ€™s an honor to wear the robe,â€ he said. â€œIâ€™ve always wanted to be a judge. There is an old saying that when you increase knowledge you increase sorrow. As a judge you have tremendous power to better a situation. Hopefully in the long term being a judge will make me a more compassionate person.â€

Given the total lack of reason to discard charges against people who were caught on tape committing acts of vandalism, one can only assume that the ideological bias of this judge led him to enact “social justice” of his own. All Leftists do this, when given the power.

We live in an occupied country. We cannot enforce our laws, cannot prosecute the guilty, and are divided permanently by an internal schism between those who want a functional society and those who want an ideological one. This is the nature of Leftist occupation, and it is no less profound here than in the Soviet Union.

Our only way forward is to take our country back. Coexistence will not work; we want different civilizations, Leftists and the rest of us. When people as corrupt as this judge exist and have power, there is no way that good will win, so the only path is to seize power from these corrupt people.