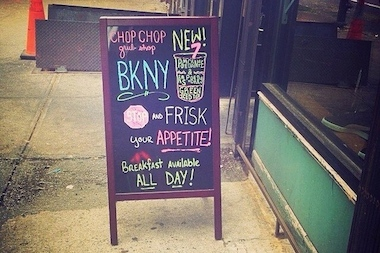 Nobody loves multiculturalism and diversity more than the adolescent liberal trust fund children of wealthy or upper middle class white folk. They are the first to rush to social justice, bask in guilt over the sins of their ancestors, and shut down an argument with convictions of racism and fascism.

But, because they are unreflective of both the consequences of their actions and the inner value of culture, they become what they hate. That abyss stares right back into them. Trustafarians are so poisoned by the Utopian propaganda of egalitarianism that they move into minority neighborhoods legitimately believing that they are doing a service to the communities of these localities. So much so, in fact, that they turn a blind eye to the destructiveness of gentrification which displaces and exterminates actual culture found in the minority neighborhoods that these hipsters are gentrifying. Â

For several years, Brooklyn’s Crown Heights neighborhood has been a victim of this plague. Neatly tucked away in the center of the borough, Crown Heights was for many decades a vibrant epicenter of Caribbean-American culture. But once the skyrocketing rents of Manhattan transformed the borough’s housing market into a virtual gated community for the wealthy white, the privileged young working professionals set their eyes on traditionally African American, Caribbean American, and Hispanic communities. Â And upon their arrival, it didn’t take the neighborhood’s landlords long to figure out they could evict their tenants and rent their homes forÂ double the price. Wouldn’t you? It’s just business.

Predictably, the newcomers demonstrated blatant ignorance and blithe oblivionÂ as vicious tactics were used to displace the longtime residents of those communities. These terror tactics included water, gas, and power shutdowns. Unfortunately for the residents of New York City, the plague of gentrification has spread across the whole city and extended to business rents as well, as seen in theÂ 30% decrease of black-owned businesses in recent years.

This is the paradox of progressive liberalism: it claims that conservative ideas are racist in intent, while Leftist ideas of diversity are racist in effect by tearing minority families apart and driving them from their homes and historical neighborhoods. But for a movement that champions irony, it’s unsurprising that the privileged white hipsters of Brooklyn are convinced they are sticking up for minorities as they ignorantly trample their culture. Â And unfortunatelyÂ for the communities they are likely to follow Manhattan’s path of destructive, pornographic material vanity.Â

Folks, multiculturalism harms all Americans. Â It destroys the cultural identityÂ of communities black and white alike. Â But due to the many holes in its logic, the left will continue to use every character assassination in the book to shutdown this conversation even as the failures of its narrative become more and more painfully obvious.