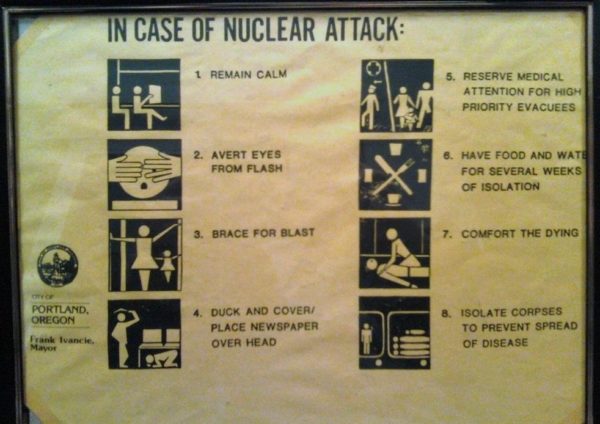 At some point in this life, you will be thrust into the role of a salesman. Maybe it is your first job, when the boss tells you to take the floor and see if you can clear a pallet of some novelty gadget. Or you will have to convince your elderly parent to enter the nursing home. Even at the committee, at work or church, you will have to sell others on ideas.

All salesmanship boils down to converting ideas into images, and allowing the disparity between what the customer sees and what you know to be concealed, so that they see the upsides and minimize the downside. This used car has low miles (been in the shop most of its life), fancy styling (please do not look at the engine), and you can spent the money you save on other things (like repairs).

In the 1960s, some hip young kids sold us a bill of goods. They wanted to take on The Establishment, which they saw as the old and calcified conservative order of their parents, and so they pitched themselves as having a new way of living — politics, lifestyle, values, customs — which was better than the old.

People being inherently gamblers, and afraid of being left behind if others adopt the new and succeed with it, followed them and handed power over to them. This was a scam, since the “new way” was really reheated Bohemian, beatnik and socialist tropes with all restrictions removed, basically just anarchy with paychecks, which enabled this new generation to cut the cost of maintaining civilization and instead, absorb that as wealth.

At the heart of it, their actual goal was to get back at their parents, who by adopting a “we are better because we are free” mentality to fight the Nazis and Commies, had made themselves into insufferable prats who concealed their vicious self-interest behind self-serving justifications. The new generation figured they could do that, too, but take out all the stops, and became the wealthiest in history.

Eventually that generation grew up and hit their 40s and 50s just like The Establishment before them. And now, this new generation were the ones enforcing their vision of the world on others, and fearful of any deviating perspective. This happened in the 1990s during the Bill Clinton years and brought out the worst in the West, including an acceleration of broken policies like diversity and feminism.

The kids who grew up in this time knew nothing except the new 1960s-style order, and so they rewarded whatever fit this paradigm. As a result, “millennials” became the most dogmatic generation the West has ever known: they saw it as normal to “no platform” bad ideas as defined by their 1960s teachers, and avoided anything but “safe spaces” where their 1960s-good ideas were enforced.

Those born from 1990 onward were able to vote in the first election that put Barack Obama in power, believing that by vanquishing capitalism, racism and inequality, they would make a better world. As if the universe were laughing, it gave them a ruined economy, even more tool-like jobs, race riots, declining prestige, failing currency and social instability everywhere, especially in dating and marriage.

The generation coming after them — really, the kids of Generation X, who were born from the 1970s onward and took their time getting married if they did at all — saw this disaster unfold and backed away from it. To them, the 1960s order (the “Revolution”) was not just the norm, but The Establishment, and if the old Establishment had been fascist, the new one was incompetent and mind-controlling through endless propaganda in movies, news, books, magazines, and even the internet.

Now we get to see what this new Establishment is like as soft censorship becomes the norm:

[Google] updated its search algorithm Thursday to promote authoritative news sources at the top of search results, according to a person familiar with the matter. YouTube has been working on the change for months, but decided to release it early after conspiracy videos surfaced on its site about the Las Vegas shooting.

…YouTube, which is owned by Alphabet, is the latest tech company to come under fire for propagating misinformation about current events, specifically the shooting in Las Vegas. Facebook and Google have also been criticized for featuring unreliable stories and sources following the shooting. For instance, Google linked to threads from online message board 4chan in its Top News results that identified the wrong person as the shooter.

Soft censorship uses private actors and social norms to enforce ideological conformity. It is different from hard censorship, which occurs when governments ban ideas, burn books and arrest dissidents. Soft censorship is nearly impossible to diagnose and oppose because it is herd behavior, where a swarm of independent activists invade all institutions and covertly exclude any different views, which allows them to create a false consensus and then exclude those other views as improper, impolite, antisocial or “wrong.”

And so now, a great inversion comes. We remember the conservatives of the 1950s as the people who were dedicated to boring jobs, shaking their fists at rock ‘n roll hoodlums, demanding that we all toe the line for antiquated notions of morality and social order. Now we have the generation after them, living on through obsolete rock ‘n roll dreams, demanding that we be essentially Good Communists for the New Establishment.

This shows us a historical cycle in real time. A truth of how to live is found, and a great society arises from it. When it comes under attack, its advocates become reactive, and stop looking forward in order to defend the shrinking pool of what they have. The few who would rather think toward the future get brushed aside because their ideas are too nebulous to those focused on the here and now, and so the battle commences between those who want something novel, as a way to feel better about the decline, and those who in resisting the decline have forgotten the reasons why things were done as they were.

The two sides grow more shrill and strident until those offering something new win out because what existed has become very dull and ugly, concerned more with obedience than results, and then the cycle crosses its median and ends up on the other side, where what was once rising is now falling and in contrast, what opposed it is rising. This continues for a time, but has accelerated matters because it has sided with decay, and so soon, reveals itself as even more empty than what was being defended.

At this point, the only question that remains is how to get out of the small cycle — an epicycle — of novelty versus convention, and instead to get to that starting point where civilization begins anew. There is no “saving the world” in this, since as is apparent to almost everyone, it will involve a few who understand what must be done breaking away from the rest, hopefully driving those failed people into the third world where they can be genetically absorbed and thus, no longer capable of subverting our civilization from within.

We realize we are starting from square one. This means bad things and good things. The bad things include that we cannot trust anything, and that we must remove most of what we see, and most of the people… the good things are that we can make a great civilization, and leave this depressing servitude to herd opinion behind, and that people are ready for extreme change.

How extreme? We are looking at escaping an entire historical era, and rejecting modernity. This means that government, corporations, equality and other standards of our lives are going to fail, replaced by something entirely new to us. What does it look like? We do not know; we are going to figure it out as we go, knowing our destination but not the path. This means exploration of alternatives:

Myself, I would like to actually win and live in a world without politics, protests, race wars, pressure-groups and globalists. I would like a world where every people has their monarch and every monarch works to make his people as powerful and prosperous as they can be. However, if that is going to happen, we have to learn what works and what does not.

At the end of the day, our enemy is not people or groups, but ideas. The individualism of The Enlightenment,™ which separated individuals from social order and natural law, has fallen. People are ready to give up on the daily ritual of trying to force this upon a world which clear does not support it. They are looking for something new.

When a cycle nears its close, all events accelerate, because the momentum toward that end has reached its maximum. We are now in that phase. Although by day we rely on democracy and equality, inside we know that it will not last, and that our actual goal is to find something better. No one knows what that will look like, yet, but we know that staying with the current regime will lead us to doom.

Right now, we are in the midst of vast upheaval, as all that was considered safe and right about the liberal democratic order fades, leaving us with no alternative but to explore less socially-controlled options, as exhibited by “populist” platforms which oppose the globalist, egalitarian and liberal democratic postwar world order:

What have changed are the political fault lines that have driven the debate since the early 1980s. Until now, the ideological divides between the parties were largely differences around social issues, defense spending and trade, as well as tax cuts for the wealthy and corporations. Today, the central issue has become populism as voters have moved away from the two political parties and increasingly self-identified as independents.

We are no longer in the zone of fighting over issues; we are in combat over the direction of our society itself. This change will be more radical than we can conceive, at this time, because it consists of a fundamental shift where the Establishment that won in the 1960s is being deposed, and with it the 500-year tradition of its ideas is being thrown out on the street.

Right and Left, in a democratic political system, become reactions to the situation as it is at that moment, which means their ideas are always relative to what immediately preceded them. One group acts, then the other reacts, then the reaction to that resembles the original action, but that action was made relative to the status quo before it, so there is never any centering on eternal and timeless truths.

People are turning toward tradition — monarchy, caste, culture, nationalism, hierarchy, qualitative thinking, and a transcendental vision — because of a need to re-orient toward what is true, not merely what is true relative to the current situation. If we want to escape the Establishment/anti-Establishment drama, we need to escape political fault lines entirely and focus on reality.

For How Long Do Caucasians Get Blamed For The Dysfunction Of Other Races? | Sexual Liberation Was An Unparalleled Disaster