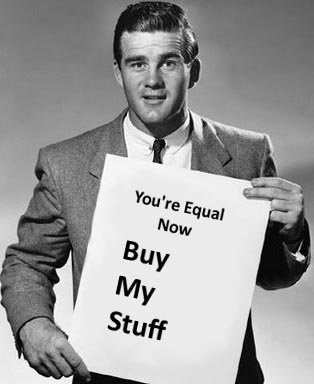 I like to make lists. Sometimes I make lists of heresies. All heresies start with this precept: reality is different than dogma. That’s what makes them heretical; they offend dogma. If our leaders and fellow citizens tell us that something is true, and we point to a contrary example, we are heretics. In a “free” society, the dogmatics are not so much our leaders as our salesmen: the people in big media, corporations and your neighborhood social group who want to convince you to do things their way.

If you find yourself asking, “Why is modern life such a drag?” consider this:

Instead of going to either of the extremes — “I’ll do it their way” or “I’ll do it my way” at the expense of all else — just do it the reality way. That is the ultimate heresy. Idiots are idiots. Marketing does not improve products. Fast food restaurants, nail salons, record stores, head shops, convenience stores, cell phone places and charities are blight. So is producing nothing but repackaging the mediocre and numbing everyone’s brain by saturating them with marketing-speak. Do you want blight? No? Then exclude these from your life. Even if they tell you you’re a heretic. That’s just a sign you’re succeeding.