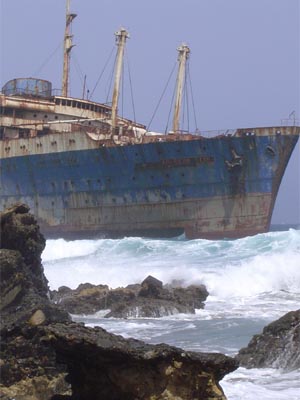 This is a time of shrugging, of throwing up hands and making excuses.

Many of us see the problems ahead. The political, economic and social system happily ignores them. Business is recovering, votes are being cast and everyone’s moving up in the world. Things are good.

Except they’re not. You can always cannibalize your long-term future for short term gains. Eat the seed corn and you’ll be fed. Future generations may starve, but for now, opulence will reign.

The reason our civilization is ignoring imminent problems is our reliance on popularity. Votes, purchases, and people liking things on Facebook: these are a social reality, not a realistic response to our problems and needs.

What is “right” gets tangled in words. For whom? Do we favor some over the rest — usually elites or the impoverished? For how long? Ten, fifty, five hundred or ten thousand years? Instead of what is “right,” we need to approach reality with realistic responses to our problems.

Our civilization is dying because we cannot say no to popular notions.

Itâ€™s the same with climate change â€“ the facts have been reasonably solidly established for the last 3 decades or so. We all know what needs to be done. But no-one actually thinks anything close to proportionate action is in any way likely.

Sure, occasionally a scientist will be so overcome with horror by the magnitude of the issues he is dealing with every day that he will make a public pronouncement on how we need a new Manhattan project for the environment, or how we need to cut emissions by 98% – but it is generally accepted that, once he finishes, he will be forgotten and business as usual will be resumed. It is, in truth, considered a little embarrassing when they do this â€“ like the drunken uncle at a wedding, he may well be saying what everyone knows to be true, pulling the skeletons out of the family closet for all to see, but, well, it just doesnâ€™t do to say that sort of thing out loud at a formal function.

Whatâ€™s going on here? Isnâ€™t this a little bit strange? John Humphries will read out the news on the Today programme that the future of the human race is in jeopardy due to inaction on climate change – but if a subsequent guest actually suggests doing something about it, he will deride them for being out of touch with reality. There is something here that needs to be dealt with, but it eludes the eye, always slipping just out of sight. – Steelweaver

If we take this information seriously, we have to be ready to drop everything we are doing and change. That means giving up what we have. That means ending our comfortable illusions.

This is unpopular for the following reasons:

This is why no vast change has moved ahead, even when sure doom awaits. Politics.

People are afraid of unpopular ideas, and they don’t like them, because they aren’t 100% affirming the “do whatever you want as long as you can pay for it” rule of modern time.

As a result, they do what seems obvious: nothing, unless their immediate self-interest can be gratified.

This in turn leads to a disastrous social experiment:

What will happen if both players will make such a stupid move?

The net effect will be that you suffer while Alice and Bob will gain. This double Morton effect is what makes stupidity disproportionally effective in groups infested by stupidity. It provides stupidity with a positive feedback loop that results in stupidity breeding stupidity. – Science 2.0

“Enlightened self interest” works only when all parties are enlightened, but we’ll settle for all parties being aware of consequences beyond the immediate.

Most people are not.

When quantity trumps quality in decision-making, you get the Double Morton: a species rocketing toward oblivion, ignoring the problems, and figuring they’re smart for doing it.

This is why humanity is helpless toward its future. Luckily, there is a simple fix:

You as an individual have two choices: either give up some “freedom” and not be helpless, or cling to eating the seed corn and be helpless as the disaster looms closer.

Cause for war | Sexy