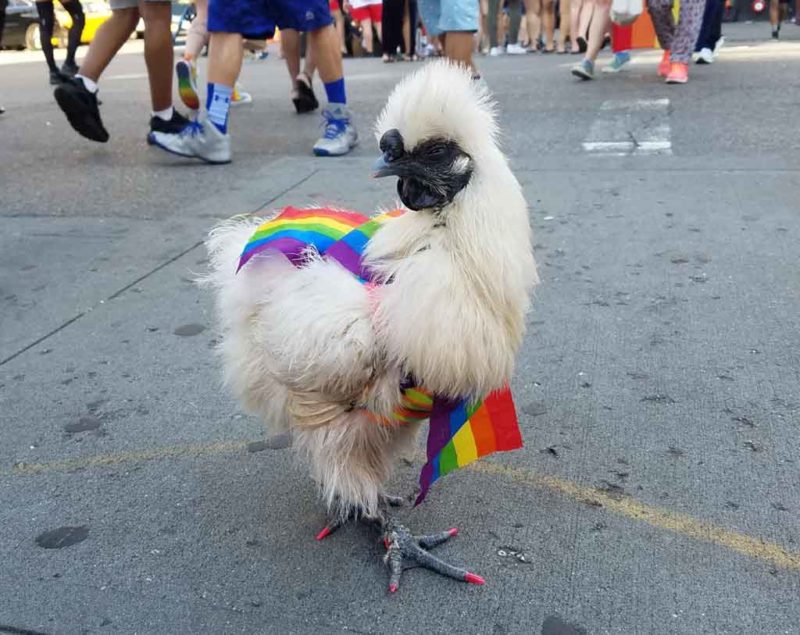 New York City has been infiltrated. What? You mean people are flying jet-liners filled with fuel and innocent passengers into buildings and killing thousands? No. We’ve already overhyped that problem into an two interminable wars that have at least temporarily sidelined our military as a legitimately effective force. This infiltration is far more insideous.

It seems the municipal food supply has been poisoned with poisoned with 100% Gay-Free Chicken. (((Dan Piepenbring))) of The Gnu Yawker Magazine warns of the creepy infiltration.

Still, thereâ€™s something especially distasteful about Chick-fil-A, which has sought to portray itself as better than other fast food: cleaner, gentler, and more ethical, with its poultry slightly healthier than the mystery meat of burgers. Its politics, its dÃ©cor, and its commercial-evangelical messaging are inflected with this suburban piety.

“The Horror!” Said Kurtz. And it gets worse…

And yet the brandâ€™s arrival here feels like an infiltration, in no small part because of its pervasive Christian traditionalism. Its headquarters, in Atlanta, are adorned with Bible verses and a statue of Jesus washing a discipleâ€™s feet. Its stores close on Sundays.

This is stoopid on steroids. People are buying a lunch from Chick-fil-A. They are not buying a set of political beliefs. Not everybody who ever bought Jethro Tull’s Stormwatch album on CD and then proceeded to crank “Flying Dutchman” as they drove off on a business trip ran off to join GreenPeace. On first pass, the proper reply to this journomaggot who probably smokes pole the way cigar afficianadoes smoke a Garcia y Vega, would obviously be, “Lighten up, Francis!”

But then again, maybe he really does have a point. People are seriously shopping at Chick-fil-A for Gay-Free Chicken from a cultural standpoint. They want a place that isn’t actively and deliberately calibrated to chase normal people out. Average citizens of a country want a public place where they can relax. They don’t want to be provoked, challenged or “woke.” A lot of people, particularly family people where both parents work full time, could really use low-stress places.

If you can’t relax and watch an NFL game anymore, don’t bother watching the NFL. If you can’t let your twelve year-old daughter use the toilet alone at Target without wondering if you’ll wind up needing a rape kit, you don’t shop at Target. If, on the other hand, you can go somewhere that lets you just take a darn burden off for a while and not be pulling security like an infantry squad out beyond the wire in Indian Country, you go there.

So yes, people are buying more from Chick-fil-A than just lunch. Gay-Free Chicken is a valid cultural concept. It represents safety from the non-stop assault we have been under from the barbarians who have overrun media and popular culture. The TV seems like a weapon aimed at my head and everything I believe in. As is the radio, as are the magazines and increasingly, most public spaces. Whether you like the insipid barnyard fowl is almost besides the point. You can sit down and eat it without being told to question your fundamental and intrinsic bigotry.

As people wake up to the fallacy of being “woke,” they will want a way to tell the various nagging gaulighters of The Cathedral to go screw off. Proudly eating their Gay-Free Chicken for lunch is a way to jam the virtue signal. It’s a way to give shrill, androgynous, purple-haired, meno/andro/zhiropausal diversity matrons the finger.

If showing up for class in a “Keep Calm and Eat Mor Chickin” T-shirt triggers the likes of (((Dan Piepenbring))), The Gun Yawker Magazine is nothing more than free advertising. The Revolution is eternal and yesterday’s revolutionaries and today’s hidebound, dying empire. Gay-Free Chicken can be turned into a Schelling Point the way Che Guevara t-shirts once were.