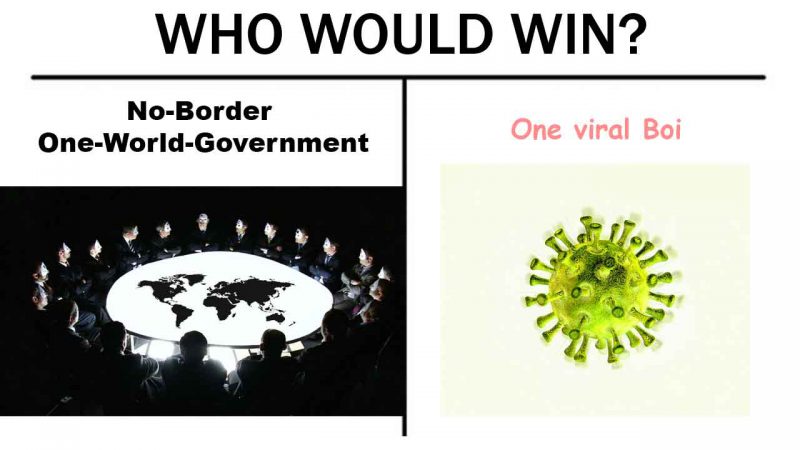 My wife instructed me to participate in the local panic buying yesterday. Luckily for us, we already have a decent supply of toilet paper and this purchasing extended our cushion from one week to three. Since my mother was raised without toilet paper, I consider it just another item on a list of many.

That led me to think, however, about the rage involved in much this panic buying. People do not trust this society to do anything but fail, and since it is fragile, when problems appear their first response is to hoard. No one cares about anyone else because we have nothing in common.

Ordinary people find themselves stressed to the point of wanting to lash out at others and harm them. When your society treats you like a tax cash cow, subjects you to constant dysfunction, and makes you obediently recite lies in order to get ahead, you secretly hate it and if given the chance, will harm it.

What better revenge on modern society than sitting on a throne of toilet paper while your irritating neighbors, the people who voted to tax your income to oblivion so they could have free stuff, and keep you sitting in traffic because of their incompetence at driving, all starve in misery?

When a civilization insists that people deny obvious truths, and keeps the productive enslaved to the useless, resentments simmer but are never really given a critical mass and a touchstone event. The failure of this society to keep up with one pandemic provides that event.

Now all the rules are gone. Revenge will rule the day. Ordinary people who have done their best just to get by now want blood, and they want it from whoever they perceive as having been in their way. The toilet paper crisis of ’20 just gave them an excuse to vent their previously suppressed ire.

People prove to be curiously resilient animals. They will survive the big stuff — wars, instability, even racial marginalization — but then they will pick up a hybrid between the Stockholm Syndrome and Post-Traumatic Stress Disorder.

This illness means that they will put up with the nonsense of their failing society and pretend to believe in it up until the point where it reveals that it is weak. At that point, the artificial polarization that makes them accept this nonsense reverses, and they turn hostile.

It is the small things that trigger them, after they have ignored far bigger things, which is why most revolutions and wars come as a surprise even though when we look back, we can trace their origins to steadily building sentiment that simply awaited a touchstone event.

In late stage liberal democratic market socialism, we cannot do a thing about the big things; we just have to accept them as part of living in a dying or decomposing civilization. However, we can hoard toilet paper and cheer on the coronavirus, hoping it is the apocalypse which ends this failed civilization.

Many of us hope that this is a flashpoint for the decline being realized and reversed by discarding things that are useless and kept only for ideological purposes. For example, with most people working from home, perhaps we can see that most jobs are not essential, nor are most workers.

In addition, much as happened with the government shutdown, we can see how little of the services and entitlements that government provide help the productive people, who coincidentally are not panicking; instead, we have a huge herd of the non-productive — both underclass and bureaucrats — in a state of neurotic frenzy.

Taking it even further, we can see how this society benefits none of those who are actual contributors since it is incompetent at all levels and mostly engaged in pointless behaviors. We do not need what it adds; it cannot even be effective at what it claims to do, which is protect us.

We might even consider the question of human population, since smaller communities of streets that are mostly empty seem far more pleasant to us than bustling cities crammed with thoughtless people. Nature is bouncing back, too, as human activity lessens.

Even more, this failure by our system offers us a “Berlin 1945 moment” for modernity, which is roughly described as the era when people give up on having a natural or divine order pervading all existence, and settle for individualism (“me first” + “now you owe me”) instead.

As some have noted, this society has been at terminal velocity for three decades:

A new approach coalesced circa 1980 when in their daily encounters, many observed a trajectory that could only lead to hell-earth but realized it was too late to change course and keep indoor plumbing without a humiliating amount of bloodshed to cap millennia of wasted time.

All of us are stuck on the train. We do not want to lose what we have, but we know that we have to lose lots of things, including Leftism, in order to survive into the future. Our fear is throwing out the baby with the bathwater, but revolution often does exactly that.

We lack the hope that we can get there easily from here.

Many have suggested that we need a human holocaust, or at least mass death of most of humanity, in order to preserve our natural world and regain control of ourselves; others say that until we become impoverished again, we will just opt to deny reality time after time.

Way before people drew comparisons between the coronavirus and HIV, some scientists were suggesting airborne Ebola to thin the herd so that the best of humanity could survive:

Professor Pianka said the Earth as we know it will not survive without drastic measures. Then, and without presenting any data to justify this number, he asserted that the only feasible solution to saving the Earth is to reduce the population to 10 percent of the present number.

After praising the Ebola virus for its efficiency at killing, Pianka paused, leaned over the lectern, looked at us and carefully said, “We’ve got airborne 90 percent mortality in humans. Killing humans. Think about that.”

These kind of extreme solutions reveal a species out of control, and its remaining intelligent people living beyond hope. Perhaps the coronavirus is not that solution, but the breakdown of our institutions and social order thanks to it may be a start.