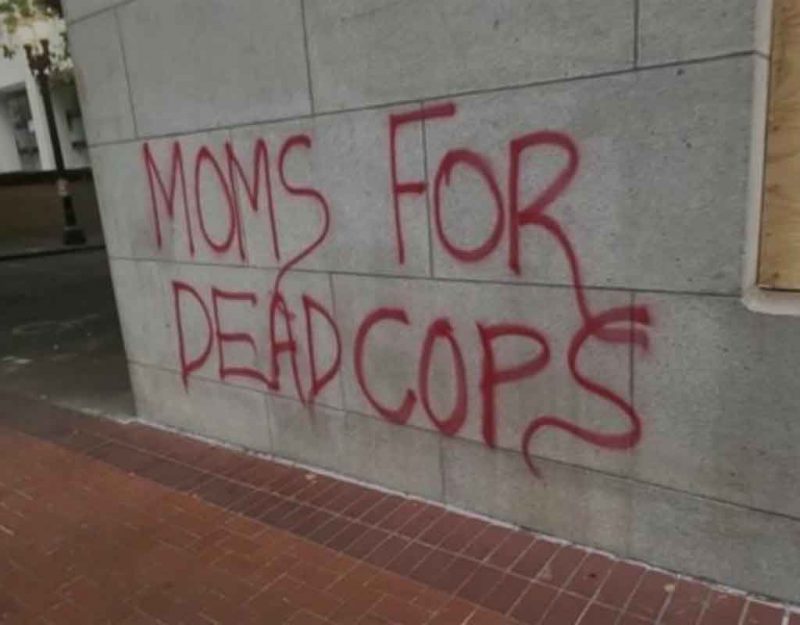 If you are the average person, you opened the newspaper this morning to headlines like Looting and Chaos Erupt in Downtown Chicago, With Widespread Damage and Shots Fired:

Looters were captured on video in multiple locations, with merchandise taken and storefronts vandalized. Officers were told to respond wearing helmets and there were multiple reports of gunshots.

Just before 5 a.m., a Chicago police spokesman tweeted that shots had been fired at officers who returned fire near the intersection of Michigan Avenue and Lake Street.

Police declared the gathering a riot as officers advanced on retreating protesters, some of whom threw objects at police, video from the scene showed. At one point, a large firework exploded between the groups. Police responded by firing crowd control munitions.

Police said a mortar injured two officers and cited “direct attacks on officers” in declaring the demonstration a riot.

Or perhaps even the tragic hilarity of Video shows shot fired outside home of Wauwatosa Officer Mensah:

According to police, a group of approximately 50-60 people “targeted and began to vandalize” the home on 100th Street and Vienna Street.

Officer Mensah attempted to communicate with the group but was physically assaulted outside his home, according to a release from Wauwatosa police around 11 a.m. Sunday.

As the officer made his way back into his home, police said “armed protesters” approached the rear door and a single shotgun round was discharged into the back door.

The event began as a peaceful march until protesters and law enforcement clashed at Phoenix Police Headquarters.

Demonstrators organized the event to remember the six-year anniversary of the death of Michael Brown Jr., who was killed by police in Ferguson, Missouri.

On Sunday, protesters were making their presence felt in downtown Louisville after the Louisville Metro Police Department announced it will no longer allow protests in the streets and caravans will have to follow normal traffic laws.

For Montez Jones, a vocal leader during this movement, he says it’s all part of the process to get justice for Breonna Taylor, a 26-year-old ER technician who was shot and killed by Louisville police March 13.

Our country is on fire. As far as we can tell, China funds the unrest, which is organized by Leftists — most of whom are teachers — and implemented by angry diverse underclass members and “Antifa,” which is a catch-all term for losers who have drifted to anarchy and Communism because they have no purpose in life.

These people are liars. The protesters are out there for fake reasons, their claimed injuries are lies, and the people they are defending (Rayshard Brooks, Mike Brown, George Floyd, Rodney King, Trayvon Martin) are all horrible criminals who would not think twice about robbing and killing the rest of us.

What happened to Breonna Taylor may have been a tragedy, depending on whether or not the police involved actually announced themselves as they said before people in the apartment opened fire. It is possible that this was simply another product of the drug war, where miserable citizens take tons of drugs and government tries to stop them because it pays for their health care.

The big point is that there is no fix for this kind of division. The country as we knew it is over; we are now going to have to decide on something else for the future.

The system has failed. What is the system? Who are the ruling classes? Back in the 1960s, Republicans decided to become “Christian libertarians” rather than fight over the national question, meaning whether we remained a WASP nation or let the mixed-whites and ethnics take over.

Now that this new system, “diversity,” has had thirty years — the radicals of the 1960s hit their forties in the 1990s and took over — to show its results, we can see that while technology has increased, everything else is bad.

We went from a nation where you could live a normal life to the “new normal” of third world behavior: promiscuity, drugs, drunkenness, socialist-style entitlements, lots of rules, mass corruption, miserable jobs, the best way to get rich is to work for government.

We are ruled by an idea, equality. It took over during the Enlightenment when people proclaimed that the individual was more important than nature, social order, and rightness (morality, faith, history, decency). Instead, we would be a mob of individualists!

It took a few centuries for this to reveal itself. It brought in socialist style programs (social security, medicare, welfare). It brought in diversity. It liberated women, homosexuals, and weak people. It punished the strong and took from them to subsidize the weak.

It experienced almost unbroken successes since 1945, with the conservatives only stepping in to patch up the system when it hovered near failure as in the 1980s and late 1990s, usually after phenomenally popular liberal administrations.

Now it shows us what it really is: a raging mob, tearing down everything in its path, demanding that the naturally talented work like slaves to support the naturally useless, with the threat of even more revolution (and full Communism) if they do not get what they want.

The Leftists in power have the same demands as the minority underclass. They want socialism, which means you and me working to support the useless. White Leftists — mostly hired by government to work in public education — work together with angry minority underclass people to destroy what we have.

We cannot go on like this. We cannot “fix” a system based on equality, since that means mob rule and that the weaker defeat the strong, since the weaker are protected by the legal, political, and social demands for equality.

We are going to have to stop applying band-aids, and start thinking about hard things like ending diversity, entitlements, civil rights, and other equality-based commitments that have transformed this nation into a soft totalitarian Leftist third world wasteland.

Fifty years ago, people thought we would be exploring the stars by now. Instead, we are forever dragged down by the lower and their demands for “equality.” We either end this, or it ends us.