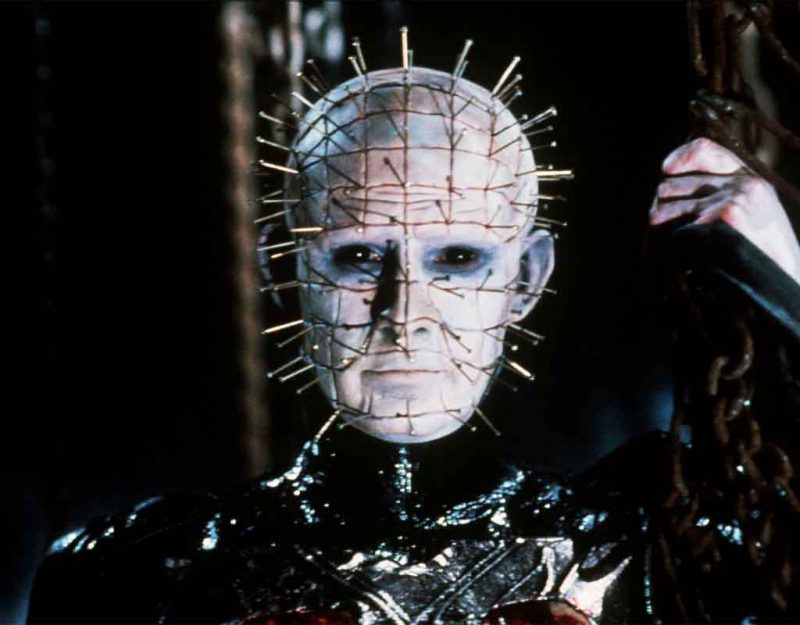 Leftists are just groupthinkers. They want to believe in the group because it is an alternative to reality. Groupthink gives them power as individuals because that way people cannot force them to obey the obvious reality and they can do whatever they want, Garden of Eden style.

Right now, the groupthinkers are raving on about the USPS, and they like to repeat the common lie that the USPS is not taxpayer-funded:

Still, that persistent myth—that the Postal Service is a burden to taxpayers—is precisely the false narrative that led Congress to pass the 2006 Postal Accountability and Enhancement Act. That act manufactured a financial crisis by compelling the Postal Service to pre-fund all retiree health care costs, 75 years into the future—for workers not even born yet. This mandate transferred postal revenues to the U.S. Treasury and robbed the Postal Service of $5.6 billion a year over a 10-year period. No other company or agency faces, or could be expected to survive, such an onerous financial burden.

“Eckshually,” he said, donning a fedora over his scraggly facial hair and small beady eyes, “everyone is wrong and the post office is not taxpayer-funded.”

Democrats and U.S. Postal Service officials are seeking a $75 billion bailout from taxpayers.

While they seek to blame the COVID-19 coronavirus pandemic, the facts are plain. Unsustainable wage and benefit costs, along with unaffordable and inefficient service requirements in light of reduced demand—not the novel coronavirus of 2019—are the real reasons for the Postal Service’s financial troubles.

During debate over the $2.3 trillion CARES Act, House Democrats sought $25 billion in subsidies, $11 billion in loan forgiveness, and a $15 billion loan for the Postal Service. The final CARES Act legislation provided USPS with a $10 billion loan while the calls for a much larger handout have continued unabated.

The AFL-CIO liars have deliberately confused two things: (1) having a regular budget from taxpayers and (2) being taxpayer-funded. In their view, unless the taxpayers make yearly payments, the USPS does not receive taxpayer funds.

This is the same scam that the Left ran on Planned Parenthood. Technically Planned Parenthood does not receive checks from the US Gov with “abort ’em all!” written in the memo line. However, much of their funding comes from taxpayer dollars, even if eckshually it goes to non-abortion procedures.

No one will say the grim truth about the USPS which is that it is a hiring program for minorities and pays out generous pensions so that it can enrich them, just like Affirmative Action is designed to do. Like welfare, the Post Office is a subsidy program.

For this reason it created its own financial problems by hiring more people even as demand went down when spammers switched from junk mail to email spam and SMS spam:

Perhaps the best indicator of the Postal Service’s structural problems is the divergence between the number of employees it has and the amount of mail it delivers. Since 2006, First Class mail has declined by 44 percent, the GAO found, but the number of postal workers has grown during the same period of time.

In addition, the Post Office had like most things under the Clinton administration been recklessly hiring and not funding those future costs, causing a financial crisis, which precipitated a legislative counter-action with the Postal Accountability and Enhancement Act in 2006:

Legislatively, the pursuit of reform of the U.S. Postal Service (USPS) began during the 104thCongress. On June 25, 1996, Representative John McHugh introduced H.R. 3717, the Postal Reform Act of 1996.

A number of factors encouraged the movement for postal reform. Perhaps foremost were the financial challenges of the USPS.1 First class mail use was declining as customers substituted electronic alternatives, such as e-mail and online bill paying, for hard-copy letters. Yet the USPS’s costs—about 76% of which were labor-related—rose with the addition of 2 million new addresses each year and mounting obligations for USPS future retiree health benefits.

Additionally, the USPS, its board of governors, the Government Accountability Office (GAO), mailers’ organizations, postal labor unions, and most recently a presidential commission said that the Postal Reorganization Act of 1970 no longer provided a viable business model. The rate-setting process was criticized for preventing the USPS from responding quickly to an increasingly competitive marketplace. Critics also argued that long-standing political and statutory restrictions impeded efforts to modernize the mail processing network and close unneeded facilities.

Finally, passage of the Postal Civil Service Retirement System Funding Reform Act of 2003 (PCSRSFRA; P.L. 108-18; 117 Stat. 624) helped sow the seeds for reform. The PCSRSFRA was enacted after it was discovered that the USPS was over-funding its retirees’ pensions. The act reduced the USPS’s pension outlays. However, it shifted the costs of postal employees’ military service-related pension costs from the U.S. Treasury to the USPS—a $27 billion obligation. The PCSRSFRA also required much of the reduction from the previous pension outlay levels to be put toward lowering the USPS’s debt and funding an escrow account.

USPS suffers from two things: unions and being used as a jobs program, notably for affirmative action goals. Its unions universally support the Left because unions exist by socialist-style collective reward and therefore, will only support the Left:

“Vice President Biden is — was — and will continue to be — a fierce ally and defender of the United States Postal Service (USPS), letter carriers, and our fellow postal brothers and sisters,” NALC president Fredric Rolando said in a statement that also praised Democratic vice presidential pick Kamala Harris.

“Together, Biden and Harris fully exhibit the experience, dedication, thoughtfulness and steady hands that will work to ensure that letter carriers and working families are put first,” he said.

There are multiple postal unions: APWU, NALC, UPMA, NPMHU, NAPS, and NRLCA. All of them give heavily to Leftist candidates: 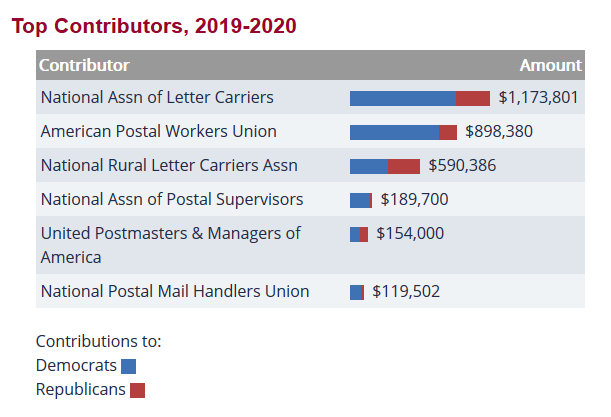 The Post Office rose to new heights — like most things — in the 1990s with the rise of junk mail as a newly-liberalized America embraced unrestricted egalitarian commerce:

The Postal Service lost $1.1 billion in its latest quarter. That number would be even larger if it weren’t for direct mailings, which now constitute 52 percent of mail volume, up from 38 percent in 1990. Revenue from direct mail “is the financial underpinning of the Postal Service—it could not survive without it,” says Michael Coughlin, former deputy postmaster.

But 89 percent of consumers say in polls that they’d prefer not to receive direct-marketing mail; 44 percent of it is never opened.

In other words, we were paying for our minority employment program with the environmental holocaust of massive amounts of junk mail, almost half of which went directly into the trash can immediately. Think of all of the landfill we could have avoided.

You could be forgiven for thinking that the USPS exists entirely as a socialist-style diversity subsidy program based on its diversity propaganda:

Our commitment to diversity is unwavering. The United States Postal Service has been recognized for its commitment to creating an inclusive work environment. We have been ranked among the “50 Best Companies for Minorities” by Fortune magazine.

Positive, significant correlations exist between diversity, employee satisfaction, and customer satisfaction. Because diversity affects our return on investment and because it is the “right thing to do,” diversity will continue to be valued and recognized as key to our success in serving every community in America.

In fact, the USPS disproportionately hires third-world-origin people and other “marginalized” (i.e. not necessary for majority survival) groups:

For the third year in a row the Postal Service was in Hispanic Business magazine’s annual “Diversity Elite 60” list of best companies for Hispanics, the only federal agency on the list.

Most things in the US peaked in the 1990s. Costs were low but quality was still high because of the Baby Boomer and Generation X WASPs still running things. Only later, when the mixed-ethnic millennials arrived did the crash begin.

For the USPS, this crash has been ongoing through a drop in mail volume that was made much worse by the transition to spam:

The beleaguered U.S. Postal Service reported a financial loss Tuesday for the 11th straight year, citing declining mail volume and costs of its pension and health care obligations even as it predicted another strong holiday season of package deliveries.

The 2017 loss came after a double-digit increase in package delivery was unable to offset drop-offs in letter mail, which makes up more than 70 percent of total postal revenue. Mail volume fell by roughly 5 billion pieces, or 3.6 percent, as people in the digital age rely more on email for online bill payments.

You could make money off of direct mail when you had a huge nation of prosperous consumers. That got replaced with an even bigger nation of mostly third-world people who are oblivious to most advertising and have no money anyway.

This means that the USPS model, which was founded on the nice WASP consumer who actually read advertising mail and considered it, has gone the way of the dinosaur, and the taxpayers are being hit up to fund it.

Even more, the quality of USPS service continues its downward stroke as the usual third world corruption kicked in as WASP workers got replaced with neo-whites and ethnics:

Janet Meyer says in the past few months she’s had several pieces of mail disappear after dropping them off at the mailbox outside the post office in the 2800 block of Timmons Lane.

“This is a post office and it should be secure. I mailed our office rent check and a check for our copier and neither one of them have shown up yet,” Meyer said.

Others have reported a similar problem to KPRC 2.

In the 1990s, you could count on the USPS to deliver your mail without it getting stolen. Now, it serves as another sinecure for second-world (Italian, Irish, Slavic) and third world (African, Asian, Hispanic) people who are stealing from the mail just as they did in their home countries.

At this point, one is tempted to agree with Trump: defund the postal service entirely and, like people in the third world, rely on private delivery to get your letters and packages to their intended destinations because you cannot trust third world government employees.

Unraveling The “Paradox of Tolerance” | Why American Toilets Are Terrible