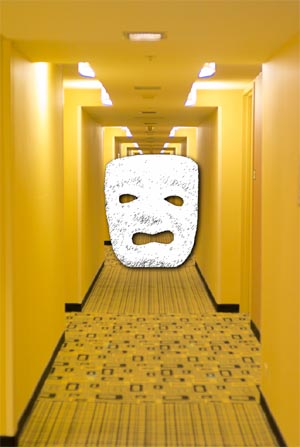 The emptiness outside haunts from within; more than nothingness, I think people fear emptiness, or the lack of any connection between things.

What is meaning? Acts leading to a goal that causes the person to feel significant. And emptiness? A lack of meaning, or the capacity for it. Nothingness? An empty space, but not necessarily emptiness.

In our universe, we are puny; our science still doesn’t know where matter comes from. We have no idea how the universe began. We bluster and make strong statements to the effect of We Know but they come across as hollow until we have the full flowchart.

The result is false, hollow answers that make people feel even emptier than before. And from behind the curtain, the raw mechanism of life peeks, and we get queasy:

These findings hint that billions of Earthlike planets might exist in our galaxy, researchers added.

These new calculations are based in data from the Kepler space telescope, which in February wowed the globe by revealing more than 1,200 possible alien worlds, including 68 potentially Earth-size planets. The spacecraft does so by looking for the dimming that occurs when a world transits or moves in front of a star.

“This means there are a lot of Earth analogs out there â€” two billion in the Milky Way galaxy,” researcher Joseph Catanzarite, an astronomer at NASA’s Jet Propulsion Laboratory, told SPACE.com. “With that large a number, there’s a good chance life and maybe even intelligent life might exist on some of those planets. And that’s just our galaxy alone â€” there are 50 billion other galaxies.” – Space

You cannot be a big shot in your city of three million, and be someone important.

You cannot be a big shot in your country of 300 million, and be someone significant.

You cannot be a big shot on your world of 10 billion, and be someone significant.

No matter how famous you are, or how powerful you are, you’re one goldfish in a tiny bowl called earth.

Even if you got famous in all 50 billion galaxies, you would still be a name and an image. No one would feel what you found significant during your time on this earth.

Now you are one tiny goldfish in a giant bowl called the cosmos, where there may be nearly infinite planets like earth with infinite numbers of creatures on them. You cannot be a big shot; no one will know you, and the universe is too big to unite and rule with a single system so that you could have a hit song like Rebecca Black’s “Friday” and get your fifteen minutes of fame.

Facing this is nihilism: the realization that there is no inherent meaning.

Without inherent meaning, you have a choice: absorb and retreat, or create? If you create, you will be forced to interact with the world, and know the world, or your creativity will be random and not very useful. In fact, any idiot can paste a circuit board on top of a turd and a religious icon and call it “groundbreaking art”; the true artists, inventors and thinkers among us create using the stuff from which the world is made, for the purpose of making existence here more enjoyable.

If there is no inherent meaning, faith is a choice. By that choice, you show who you are. There is nothing, but I choose that there be something! I rage for order, I clamor for beauty, I strive for excellence, I want more! faster! better! — and by doing so, I project from the essence of my consciousness a belief in something better than inherency: an ability to choose the better over the less-better.

If there were an inherently right answer, the universe would be not only a closed system, but one without energy potential: there is no point solving an equation for which the answer is known. When all answers are known, what is left to do? Nothing: this is what the cosmos would do in that situation, as well.

Not only in there no inherent data, but our science is puny, and our learning small — we barely know a rounding error’s worth of data on our universe and its origins, and so it constantly surprises us, although we recover as quickly as we can:

NASAâ€™s Fermi Gamma-ray Space Telescope has unveiled a previously unseen structure centered in the Milky Wayâ€“a finding likened in terms of scale to the discovery of a new continent on Earth. The feature, which spans 50,000 light-years, may be the remnant of an eruption from a supersized black hole at the center of our galaxy.

â€œWhat we see are two gamma-ray-emitting bubbles that extend 25,000 light-years north and south of the galactic center,â€ said Doug Finkbeiner, an astronomer at the Harvard-Smithsonian Center for Astrophysics in Cambridge, Mass., who first recognized the feature. â€œWe donâ€™t fully understand their nature or origin.â€ – Smithsonian

We are weak, tiny, small, frail and fragile. There are many things of which it can be said, “We don’t fully understand their nature or origin,” starting with the universe, matter/energy, and spaciotemporality itself.

If we are to find meaning in this world, it will not come from direct discovery, but from abstractions made from the patterns of existence. If logic is consistent, we can make educated guesses, and these are what we need.

For in so many ways, “hard data” orients us toward the details and leaves us lost as to the context. It leaves us knowing a small fraction of what we need, and projecting it as the absolute truth; this is the cosmic equivalent of screaming WE ARE HERE THEREFORE WE ARE SUPREME into the howling void.

Our inability to reconcile our inner warm with the outer cold emptiness has produced an inner emptiness that may consume all of us:

According to Robert Putnam, sociologist and author of the influential book, Bowling Alone, for every 10 minutes added to commute time, there’s a roughly 10% decrease in social ties.

But we’re truly not designed to live like this. For the great majority of human history, people resided in small, intimate hunter-gatherer communities. – Psychology Today

We need to deal with the beast within, and the emptiness.

If we do not find a balance between our voids and the void without, we will project into it illusions of the most venal type. In doing so, we will deny what it is we must see: the nature of reality as logic, not material.

We have suppressed the true world: what world survives? The apparent world perhaps? â€¦Certainly not! In abolishing the true world we have also abolished the world of appearance! – Friedrich Nietzsche, Twilight of the Idols

Our void is too often based upon the material nature of things. Bodies age; pain is felt; nothing gold can stay, and many other tragedies. Yet these tragedies pass and are replaced by flowers, forests bursting from the earth like exultations of joy in a child.

The material methods we employ in our science will not tell us what is the origin of void of Self; for that, we can only trust comparing patterns. What might those be? The similarity between storms and galaxies? The parallels between gravity and love?

Instead of projecting a world, we must intuit one.

Instead of fearing for our physical selves, we must turn our eyes to the stars.

There is no way to avoid suffering; to love is to hate, to love is to feel pain, and to not love is to live in a perpetual state of entropy: no motion, becalmed, stagnant and miserably absent. You must love and you must feel pain, or you will not be alive.

This is why the end justifies the means: the end is all. The means? Transient, including us. What makes our lives meaningful is not survival, because we will not survive this, but the trade of time and energy for a sense of meaning.

To love, and defend that love; to hate that which threatens what is loved; to lose, to weep, to curse the name of life itself, and then to get back up out of that dust and try again.

If I had to describe using only a couple of sentences what it feels like to be a conservative, I would probably compare it to the hypothetical but surreal experience of noticing that many people around you have sore heads because they keep banging them against a wall. – Fourth Checkraise

It has these parts because its goal is not to try to protect the means from the cold howling void, but to make those means work toward something of significance, — beauty, even…

And this way the universe is not a cold void at all, but a flowering of life unbidden and oblivious, as if a sleeping genius enraptured by creation.

The end (of the world) | The Sound of Nationalism