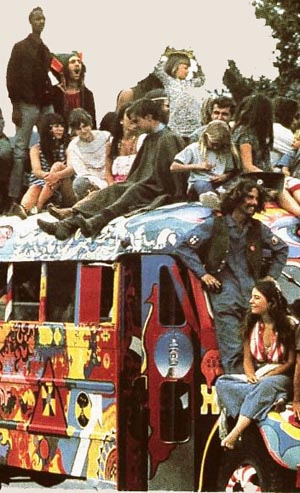 When I become a grizzled old guy, if I’m so lucky as to get there, I’ll remember this sage piece of advice for any younger people I have the pleasure of boring:

“The future is tired old ideas. Don’t waste your time trying to invent the next big thing. Figure out what’s expired, and put a fresh coat of paint on it, and the idiots will flock to your side.”

This thought zings into my head every time I see someone from Generation X, Generation Y or the millennial Generation Zero endorsing some kind of hippie logic, or even just leaning to the left. The potential but never to be realized conversation blooms in my head.

Why do you praise and then repeat the failed past? You’re emulating the people who inherited a first world country full of potential, and left you a burnt-out ruin full of debt. America now more resembles the countries that fell to third-world status, like Russia or Brazil, and are now ruled by corrupt oligarchs in the shadows. Your public services are garbage at this point. Your education, overvalued. Your government, incompetent. And the people? We’ve bred a bumper crop of stupid, imported stupid, and in fact done everything but clone stupid in labs. Who did this to you? The Baby Boomers — the generation that became the hippies — way back in 1968.

Do you remember 1968? Of course not: that was a lifetime ago. But these people and their hideous ideas are still kicking it around, and they think they’re smarter than you. Like a bad parent, they think they can manipulate you — and sadly, most commonly you prove them right. They do it with the oldest trick in the book, which is to distract you from what you should have had with bauble or other shiny treat.

“Here, you can’t have a stable country, so have this cookie instead!”

They do it to you a million ways. You can imagine their dialogue:

The hippies were charlatans the first time around. They took the formula of the 1920s generation, who rebelled against World War I, and turned it up to 11. Free love! Free drugs! Equality! Civil rights! Peace! And ten million other things that share one attribute in common: they’re distractions from the real issue.

All these moral questions are about how you want to look to others. Do they think you’re a nice guy because you defend the rights of the gay mentally retarded Eskimo? Are you giving away your genitals to others to have fun, which by definition makes you a nice girl? Be nice. Give it all to everyone else. Then you’re cool.

But none of this has any bearing on anything other than your popularity with a mob made of selfish people who have no direction in life. What about wanting to raise a family? Have a career that isn’t overwork for low money in the company of idiots? Have a society that is aiming for new heights and doing great things, instead of beating up on every tin-pot dictator who doesn’t endorse our jihad for democracy, equality and “freedom”?

Those 1968 people inherited a country with the best economy in the world, the best legal system, some of the bravest and smartest people, the safest streets and probably the best places to work. What did they have you, Generations X, Y and Zero?

They handed you a wasteland, and they laugh each time you parrot their tired old ideas as if you just discovered something profound. They won: they manipulated you, and you don’t even know it. Enjoy your servitude, because it was done by your own hands.

Against Democracy and Equality by Tomislav Sunic | Tailgating as shortsightedness