Every Ethnic Group Acts In Self-Interest, Which Means They Want To Kill You 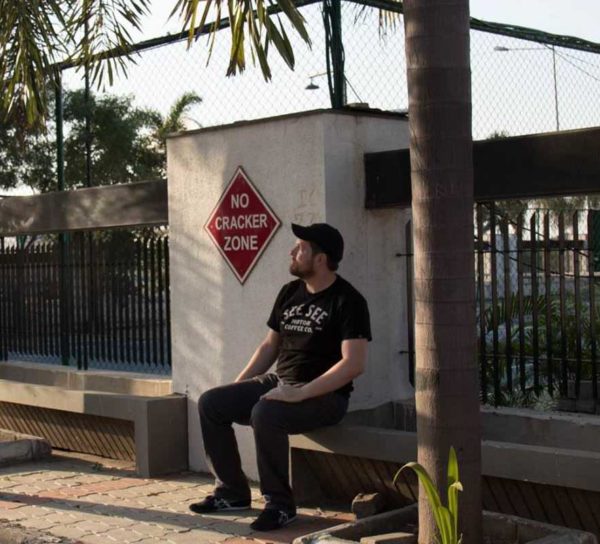 Leftism was doing fine when it relied on the promise of Utopia. For Leftists, “true equality in our lifetimes” was always the goal that would salve all of their problems, both personal and as a civilization. Leftism thrives on an effect known as “the grass is greener,” in that it gives people a scapegoat and a daydream at once.

As soon as it is realized, however, Leftism goes from making promises to having to deliver on those promises, and there its fundamental clash with reality emerges. Leftism asserts the primacy of the human individual and projects human thinking onto the world. As a result, it creates a widening gap between our idea of the world and its reality.

Part of that widening of illusion consists of the notion that people do not act in self-interest, but out of obedience to universal ideologies of support for human rights. We think that we can control others with obligations to which we bind ourselves, forgetting that it is easy to claim to support something while planning to be an “exception” oneself.

Every now and then, someone offers a glimpse into the differing motivations of ethnic groups, such as the following piece from the Texas State University school newspaper:

Your DNA is an abomination

“Now I am become white, the destroyer of worlds.”

When I think of all the white people I have ever encounter — whether they’ve been professors, peers, lovers, friends, police officers, et cetera — there is perhaps only a dozen I would consider “decent.”

My colleague, Tafari Robertson, in his brilliant column “Debunking the Myth of White Majority,” already exposed whiteness in the United States as a construct used to perpetuate a system of racist power. This column functions, however, within a different definition of whiteness: to be white in the United States is to be a descendant of those Europeans who chose to abandon their identity in search of something “new” — stolen land.

Racial categories — white, black, brow, red, et cetera — are used to subjugate non-white people. This bending of semantics upholds a white supremacist society. As someone “white,” whether you know it or not regardless of your socio-economic standing, you benefit from privilege. In Texas, a bizarre state I have no inhabited for four years, I continuously meet individuals that either deny the existence of white privilege or fail to do something productive with it.

A lot of you tell me, upon my insistence that whites should have an active role within activist circles, that you “didn’t choose to be white.”

You were not born white, you became white. You actively remain white. You are estranged from yourself and, in that absence, have been instilled with an allegiance to a country that was never great. One that has continuously attempted to push non-whites into non-existence through crusades that have been defended by the law.

In your whiteness, you are granted the luxury of not having to think about race daily. Your heartbeat does not speed up when you get pulled over and find yourself staring at the red-and-blue lights of the fascist foot soldiers we call the police. You don’t leave your home wondering if you will ever come back. You don’t give a damn.

The oppressive world you have built, through the exploitation of millions and the waging of barbaric wars against one another, is coming apart at the seams. Through the current political climate, in which a white supremacist inhabits the White House and those of his ilk would try to prove otherwise, I see white people as an aberration. Through a constantly, ideological struggle in which we aim to deconstruct “whiteness” and everything attached to it, we will win.

Whiteness will be over because we want it to be. And when it dies, there will be millions of cultural zombies aimlessly wandering across a vastly changed landscape.

Ontologically speaking, white death will mean liberation for all. To you goodhearted liberals, apathetic nihilists and right-wing extremists: accept this death as the first step toward defining yourself as something other than the oppressor.

Until then, remember this: I hate you because you shouldn’t exist. You are both the dominant apparatus on the planet and the void in which all other cultures, upon meeting you, die.

You can see the original text here: 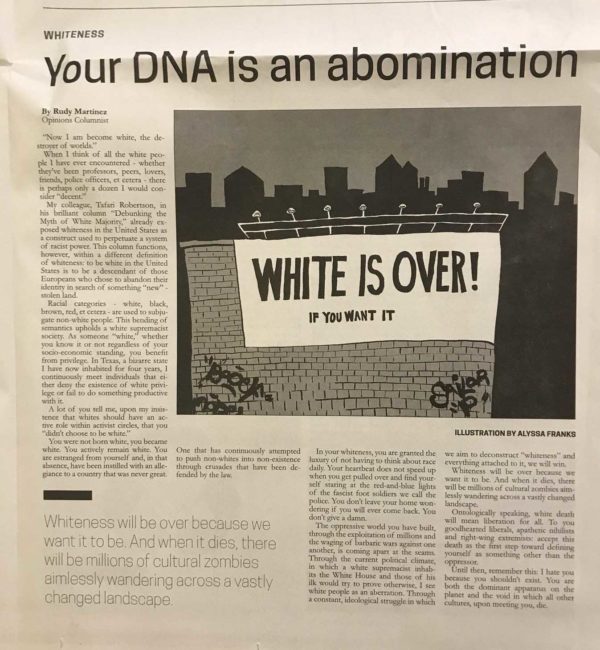 He is correct in one thing: if you are Caucasian, you are “are estranged from yourself” and simultaneously are on the path to “defining yourself as something other than the oppressor.” This begins in realizing that their dream is not ours, and our goals are not theirs.

Every group wants to rule the world. Only then is it safe from other groups, and can establish its own standards, customs, and purpose. This means that while other groups do not intend it, they are enemies of Western Europeans.

Those of Western European descent are starting to emerge from the fog of the ideological era. Humanity has spent the past two centuries in a stupor, chasing a symbolic goal that evaporates as soon as they get close as it self-destructs, but then they redouble their efforts: “This time, this time, we will surely truly be liberated!”

The bodies pile up, and each year we are weaker and less competent. Realists sigh as they watch society destroy itself in pursuit of what is ultimately just another trend. Monkeys in a troupe, screeching, chase after a shiny object, each clawing the others down in order to feel himself in possession of Power.

When Leftism attained globalism, it realized its dream. It could abolish nations, unite the workers of the world, and force everyone into a purely human agenda so that none felt that they would lose social status for their stupid, crass, destructive, parasitic, or otherwise anti-realistic actions.

But when we saw the reality of globalism, we realized that it was like living in an endless hotel with each day the same, going through the cycle of churning through work for a paycheck, then seeing it go away, all while insanity ascends and everything good is eroded. The white soul is reborn as it flees this false religion of human omnipotence.