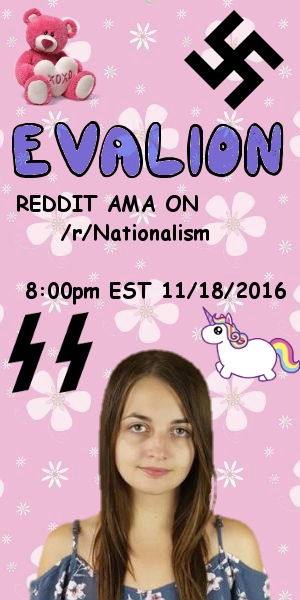 Expect a lively discussion involving all of the taboo Alt Right memes and ideas, nationalism as concept and application, and lots of NEET/neckbeard (neetbeard?) interference because that is the regular Reddit audience.

As services like Twitter become censorship-happy — banning Richard B. Spencer, Pax Dickinson, Ricky Vaughan and other relatively inoffensive accounts as part of the November 2016 purge — those who want to be able to have a conversation without fear of being suddenly separated from all of their content on that platform are heading to more obscure sites.

While Reddit has its own censorship problems, and continues to remove right-wing channels when they become too active, it serves as a good place for encountering the more nerdy-than-average social media user in its active habitat, and Q&A sessions with attractive young females add appeal to the increasingly visible Alt Right presence there.