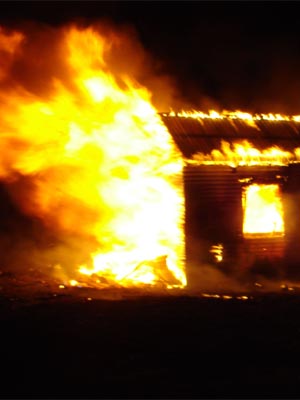 Race riots are like herpes. We see the flare-ups, but the infection is deep within and always there.

In effect, the multicultural West has always been in a state of race riot, but most of the time it has been pacified. A huge infusion of welfare cash, a few token elections or symbols, and it stays quiet for some time. But there’s no illusion that it won’t explode again.

Our mainstream press, politicians and social leaders are doing their best to avoid mentioning the unsociable truth that right now, we have nearly-continual race riots in the UK and US. The central European race riots have cooled down for a bit, but watch France and Germany detonate in the near future.

During a televised discussion of the past weekâ€™s riots in England on Friday night, a prominent English historian sparked outrage by insisting that black, Afro-Caribbean culture was to blame for the mayhem and looting, even when the rioters were white.

David Starkey, who has presented several documentaries on the Tudor period, said during a BBC debate: â€œthe problem is that the whites have become black â€” a particular sort of violent, destructive, nihilistic gangster culture has become the fashion â€” and black and white, boy and girl, operate in this language together; this language, which is wholly false, which is a Jamaican patois, thatâ€™s been intruded in England, and this is why so many of us have this sense of literally a foreign country.â€

Asked if he was saying that the prophecy of Enoch Powell â€” an English politician who claimed in a speech in 1968 that immigration would eventually mean, â€œthe black man will have the whip hand over the white manâ€ in Britain â€” had come true, Mr. Starkey replied: â€œThatâ€™s not true.â€ He added, â€œitâ€™s not skin color, itâ€™s cultural.â€ – NYT

The article glosses over it, but these are race riots. Whether white people are participating now is irrelevant; the chaos started from racial resentment.

Talking about “skin colour” is how white people signal to other white people that a statement is insincere. Even the most oblivious know race is more than skin color, hair straightness, and eye color. It’s a record of evolution, both lateral and vertical, just as social class is.

The fact is that England is burning because of white racism.

White racism was rare in the older days; it was assumed that evolution branched and so some went to the north and developed abilities others did not. As a result, the reasoning went, it made sense to put them in charge. This is why when academics talk about “white supremacy” they’re not quite right.

That form of recognizing racial differences had no real rancor to it. It was assumed to be an extension of the obvious need for social classes. If you give the lower classes a huge dump of money, they blow it on trinkets and return to their impoverished condition (think of present-day lottery winners).

In that view, it made sense to put the most wise at the top so they would manage the others and all would prosper. Again, no rancor behind it, although obviously some individuals were filled with hatred. In fact, the vast majority of whites wanted to avoid any contact with other tribes, even other white tribes.

Things only got ugly when some poorer whites realized they could make good money as slave traders, as Chinese, Arab, Jew and Moor had done before them.

Slave trading was a way for lower classes of whites to make more money than they had ever dreamed of — sort of the same way people hope to rise from the ghetto through boxing, rapping or acting.

Still, most whites were not racist. They recognized differences, but opposed cruelty (most still feel this way). They disliked slavery for this reason. Unfortunately for the 99% of whites including Southerners who did not own slaves, the rest got tarred for the misdeeds of the few.

It’s clear slavery was not as brutal or as widespread as depicted in the popular media (who have zero obligation to truth, only to drama). Slaves were valuable, and usually treated well; slaves were few because most people couldn’t afford them and didn’t want them. But the institution is best gone.

However, with that blaming whites for all the ills of minorities came a new type of white racism. In this, minorities were used as pity objects. It was like buying a new TV or shiny new car. “See how prosperous I am? I’m better than you, because I’m nice to minorities and act like they’re equal.”

Yet no one really believed it.

That’s why we’ve had a steady flood of entitlements to minorities, affirmative action, refusing to mention the race of perps in the news, diversity initiatives, endless multiculturalist propaganda, and so on. The 1968 baby boomers have projected their racism onto a new generation of whites.

While separate-but-equal and contentment to be separate without resentment were once the rule, we now have forced dogma. You either oppose it honestly, or adopt it and yet exist unequally with it, because you must be dishonest to believe it and still protect yourself.

For example, how many diversity-mongers have moved into majority minority neighborhoods? Close to zero.

Diversity propaganda is their way of being better than you. Diversity is their method of fragmenting a majority so any kind of behavior including deviancy is accepted, in the name of our new religion, tolerance/equality. But it’s not for them. They move to the wealthier suburbs.

And so the race riot never ends. Who’s to blame? The diversity illusion, obviously. But even fundamentally, we should blame white racism. White denial of race, and paternalism toward minorities so some poorer whites could rise socio-economically above others, is parallel to slavery.

But worse, because it’s dishonest, and because it’s creating a dual tragedy: it destroys national culture, and also keeps minorities in perpetual poverty.

Every decade or so, they finally get sick of the constant lies and lash out. Then in come the racist white people with more pleasant-sounding lies, and they fool everyone for another couple elections.

Mayor Michael A. Nutter, telling marauding black youths â€œyou have damaged your own race,â€ imposed a tougher curfew Monday in response to the latest â€œflash mobâ€ â€” spontaneous groups of teens who attack people at random on the streets of the cityâ€™s tourist and fashionable shopping districts.

The head of Philadelphiaâ€™s chapter of the National Association for the Advancement of Colored People, J. Whyatt Mondesire, said it â€œtook courageâ€ for Mr. Nutter to deliver the message.

â€œThese are majority African-American youths and they need to be called on it,â€ Mr. Mondesire said. – Washington Times

It’s like the same situation on both sides of the Atlantic. How the heck did that happen?

My message to minorities: don’t believe a word these happy hippy-bourgeois white people tell you. It’s all lies. Diversity doesn’t work, and you’re going to get stuck holding the bag (in an impoverished ghetto). These people are using you.

Even more, diversity can never work for you. Do you want to be ruled by yourselves, or ruled by random racial hybrids? Do you want an identity, or to become a destroyed ingredient in the great melting pot experiment (which has been tried many times before, leaving ruins of societies behind)?

The average white person continues to watch the TV, and hope the lies are true, but not fully believe it. If the lies were true, the problem would not keep flaring up like a herpetic lesion. The average minority person should consider similar cynicism toward the lies of “well meaning” white racists.

Until we are able to honestly look at diversity, and honestly talk about race, we will continue to burn. For such blatant denial of reality, we deserve it.