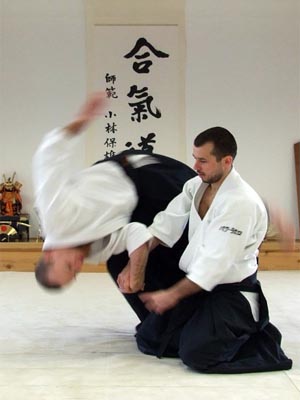 She is an unlikely candidate for this: at the far end of middle-age, a calm and sensitive woman, if sometimes overly emotional. So what is it about â€œBig Fightingâ€, as she calls it, that so engages her?

Skill, I suppose, displayed so daringly, in these contests. Fearlessness. Engagement!

Observe these Martial Artists: they never look away from the threat. This thing is not happening to them. They are this thing in which they are engaged. It is this engagement that provides such an engaging spectacle.

Years ago, I found myself, alone at sea, on a rotting plywood trimaran, beset by the worst storm imaginable. Beyond imaginable, really. A real eye-opener. When we consider the possibility of our own death, we see it as some future event. It comes as a bit of a shock to have to accept that here it is, today, now, and nothing to be done about it.

Of course, I was terrified. Scared silly. Out of options, nothing to be done, and no end in sight, other than my own. Brain-numbing, spine-chilling terror. This was reality. It could not be sidestepped. What was left?

I decided that since I was in the final moments of my life, that I might as well enjoy it. And this I proceeded to do. The ghastly backdrop of mammoth breaking waves became a scene of stupendous magnificence. My lost and hopeless loneliness became an insuperable honour: I was the only living thing able to witness this awesome event. And without noticing, became no longer a witness to the event, but the event itself, passing seamlessly through its far side into the realm of engagement.

The storm and I were no longer at odds. This thing was no longer happening to me. I was it, and it me. With this, all fear was banished, it would seem, forever. I became utterly changed by the event, not only living through it, but being added to by it. Whereas I might have merely experienced this storm, I was able to, instead, engage it. And that is a distinction worth considering…

We move from entertainment, passive sensory subjection, classroom learning, into something exponentially greater. Being part-of this thing, or event.

From observer, to observed.

The leftist mind will never know this. It is not a mind thing. The leftist will compulsively and endlessly inhabit the outside, poking, tweaking, messing with whatever takes its fancy. There is no end to this. No point will ever be reached where the thing it tries to manipulate and control will ever be the way it â€œshouldâ€ be. A type of madness, in fact. Forever unable to leave anything be, and join together with it, in harmonious oneness. Which is both good and bad:

Keeping up with the Joneses | Yeast