Many of us have that one friend with whom intellectual banter and even serious debate can be had with no fear of personal feelings and ego ruining things. I’m fortunate enough to have a friend like this. In our debates, he usually plays the softer side of the human race, and I play more the cynic who feels most people can barely tie their shoes and get to work in the morning without a struggle, let alone lead or be qualified for degrees/education. 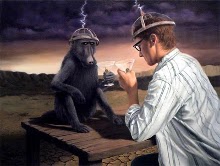 Recently, an interesting discussion unfolded: as he has moved to a big city, he’s been taking more advantage of technology, such as a cell phone that has a navigation program nearly as good and responsive as dedicated GPS units, and purchasing more “stuff” in the way of televisions and computers. We each had a techy streak during our college years, and it was fun, but these days I don’t care what TV I own and increasingly view the internet as a wasteland of personal shouting matches rather than a place where people can be any more “free” than they are in cubicles or tiny apartments with gunfire occurring three blocks over.

In the midst of the debate, he made the argument that most find the internet, TV, and telephone particularly useful with learning. He also stated he knows more now than he would if he were born seventy years ago because he has access to more information and is more able to discern truth from lie (or “true fact” from “false fact”) more readily.

I countered that he is a Ph.D., and as he’s always had a high IQ, he is more able to discern what is true and what is false, and that media has simply been a tool to help him get there. Like a hammer, you can use it to build a house, but how many average individuals would build a beautiful, level house with that hammer? Only people who know how to use the tool well; e.g., a carpenter.

I also mentioned that we see a huge hole in the areas of philosophy and even science to a degree these days – and most certainly religion – in terms of great thinking men (or women, if you prefer). Why is that?

It’s a typical argument of the modern age: technology helps people become better than they would be otherwise. And thank God we have it because if not, we would have been like those 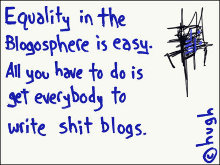 fascist/racist/commie pigs who didn’t let blacks or women vote and who didn’t have iPhones! Instead, the evidence suggests that people still zone out in front of idiot boxes and use technology to do very little in the way of anything meaningful.

But that’s only most people. We still have the issue of even Ph.D.’s and other high-intellect individuals feeling the same way about technology. And going back to the holes we see in certain areas, my guess is many have been alienated from a young age instead of encouraged, so we have even fewer bright spots in the human race overall.

For the intellectuals who can live in the modern world comfortably while using their brains, technology certainly brightens up their own lives and makes research a lot easier – for people who can filter through the mess. But what about reasoned debate? If technology has truly educated the masses as my friend professes, shouldn’t there be a greater level of intellect that is more readily accessible? I find the opposite is true.

Debating becomes more tricky in this world when trying to prove a point, because anyone with a keyboard now has the potential to post a counterpoint as long as he/she is clever enough to get enough traffic to their free blog – such that Google rewards them with a lower search result number. And how many Ph.D.’s are out there in the blogosphere worrying about what some other idiot says about a sports team, a “foodie” article, or even our own President? My guess is very few, as many of them are too focused on producing something. So you have the same uneducated people who are able to posture as educated – not just to their own group of bar buddies or co-workers as in years past, but to anyone in the world who surfs on in.

In this case, the access to more free information is our downfall: people who have no business debating at all engage in clever ways to try and prove up their point to the masses by commenting on the blogs or articles of others. This behavior is rewarded whereas before, morons would be punished when outside of their element and trying to prove a point they either can’t back up or shouldn’t have attempted to make in the first place.