Education is not intelligence 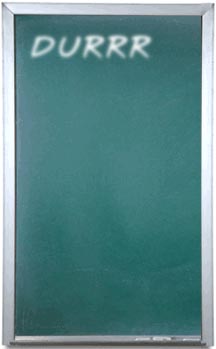 Somehow, despite complaining loudly and frequently that modern society treats us like products on an assembly line, people are too willing to adopt the mentality that leads to that outlook.

We consider — for example — higher education to be like a stamp press on the line. We feed in random people, STAMP! and out come uniform, well-pressed, “good citizens” educated in the “right” opinions and inclined toward whatever our current political trends are.

But this is a wholly modern mentality. There exists raw material, which is the same everywhere and we can assess it by percentage of purity, but when we get it refined, we run it through the machines and we get near-identical copies that do what we as individuals want.

Do you want your barista to have personality? Only in that inconsequential sense that adds to your pleasure when ordering coffee. Should your broker be a human? Or your grocery checkout clerk have a soul? No: they need to be functions, not individuals. Our education system approaches people with this mentality.

Longtime readers of this blog know there is a disdain here for individualism, which much like communism puts the communal wealth interest first, puts the individual and its desires, wants and social pretense before all else. Individualism is excess of the individual exercised in meaningless ways; however, failure to recognize the positive traits of some individuals reduces society to its lowest common denominator (I believe liberal theorists call this deconstruction).

The flip side for the average person is that since we view education as an industrial process, calling someone “educated” has taken on the undertones of respect we used to use when calling people “intelligent” or “honorable.” Educated is not a process; it’s a social status, a level reached in life that allows you to look down on others for not being educated like you. Since it’s one-size-fits-all, you can also assume that every educated person has a valid opinion that is more right than what any non-educated person thinks. And if you disagree with someone, you can call them un-educated too.

In this context, “educated” takes on all kinds of meanings. It is a social standing, an in-group, a set of “correct” opinions, and even more like science and religion before it, a presumably inerrant body of work you can use to club others over the head. You don’t agree? WHAM — here’s the “educated” opinion — WHAM — see how little you know? And how much I do, they imply.

No one who has any real faith in their abilities relies on such transparent ruses. Even more, they know education is basically a certification program, or a jumping-through-hoops to show you endured the system, except in some cases of technical education or hardcore academia. For most people, it’s attending classes not much different from those in high school, memorizing some methods and facts, and spitting them out at the appropriate time. It’s vocational education “prole drifted” to the level of being presumably “higher” education.

This slights two groups of people: first, those that are both educated and honestly intelligent, practical and moral (we call this “having a clue” and not in the hipster sense); second, those who are not “educated” but have high intelligence or awareness of the world. A person with an IQ of 150 who is not educated is not dumb; he or she lacks some training, some facts, but with those, will always outperform the 120 IQ person no matter how much that person “educates” themselves. But that’s an unpopular truth, and our society avoids those, washing them away with waves of equality, harmony and pacifism propaganda.

My experience in academia was that the people who clung to it most doggedly were often not the most intelligent, but those who mastered in a narrow space the art of looking intelligent. To be a smart liberal arts professor, you need to know the 500-1000 words that are trending in academia at that time: juxtaposition, conflation, sui generis, etc. You need to use these pointedly so people know that you’re educated. Then you need to read the trade publications and talk about basically the same stuff everyone else is. To be a smart CS professor? Memorize the current archetypes in use in programming. Follow trends. Teach from public examples. Always talk about a concept that is trending: design patterns, concurrency, threading, hierarchy. Make sure people know that you’re a super genius by the way you talk, can’t dress, and find all of reality outside of computers to be “sort of quaint but weird.”

Our civilization has declined to the point where we have stopped caring about quality. We want to make sure everyone is included. So we rush them all through education, give them high salaries, and then watch as our society wilts because we are not rewarding competence, but persistence and obedience. We have outsmarted ourselves, but mother nature gets the last laugh, because the only true growth we experience comes not from the educated but the intelligent. Amusingly, those two groups overlap less now than at any previous time in our history.

While smart people should still pursue education, and in fact we need more smart people in education to point it in healthier directions, most of the people who are “educated” are proud of that fact in lieu of another. If you cannot be genius, get enough degrees to hide that fact. If you cannot understand what you read, memorize enough logical-sounding arguments to confuse anyone you talk to. Hide behind appearances and social certifications. It may make you feel better, and you may impress your friends, but the end result is that the value of education is cheapened.

In the 1970s, educators warned that we needed to teach critical thinking more than basic skills. If someone can read, but cannot understand the logical arguments made therein, they will immediately feel their insufficiency and do what all people who fear they are insufficient do — adopt a viewpoint because it conforms to their existing view of the world, and use that ideological basis to filter what they accept as true. And since they’re “educated,” it’s hard to criticize them, since our society has rubber-stamped them has having truthful answers.

To all students up and coming in the world, I suggest you never describe yourselves as educated — it’s mere pretense. Instead, go to school and learn your basic skills, but keep applying them to the abstract goal of formulating knowledge, or practical wisdom. People will tell you that you will sound smart if you just parrot one or another ideas that are selected for their social popularity, like most ideologies. No one claims these ideas are true. They don’t have to, because most people will parrot them to seem educated. You can avoid this trap, and if you do, you’ll enter into a new world of people who are smart enough to not require “educated” as a way of describing themselves to others.