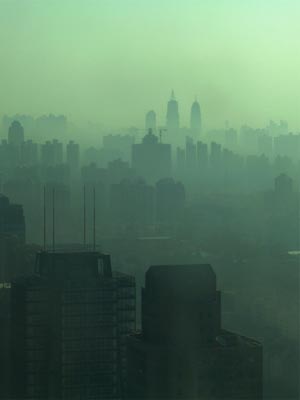 The right has withdrawn from climate issues for the most part because the left took them over. The left then used the environment as a justification for the usual leftist agenda, which is suppressing the strong in the name of equality.

If you read this blog at all frequently, you know what we hold leftism responsible for the decline of the West (and anywhere else it touches). Since the birth of modern leftism in France in 1789, our fortunes have declined while our governments have grown more controlling.

Leftism isn’t unique; it’s a natural human impulse that comes from self-pity and the depersonalizing nature of crowds. This is why the first thing leftism does is insist that it is freedom for the individual. But then the fine print: through equality, which depersonalizes and alienates.

Wherever leftism arises, the story is the same. We, the crowd, are afraid of those who are more competent than us. We will insist on equality and wealth redistribution and lots of rules to bring those people down to our level. When we’re all equal in that way, there will be no conflict and we will all live happily.

Uh, live happily in a dreary, uniform, conformist, fear-blighted place where there’s no room to move (equality) and not ability to gain power to rise above the herd and enact any kind of change (equality also) and it’s so dysfunctional we sit around in the dark chanting Party slogans.

Leftism, liberalism, progressivism, socialism, Utopianism, anarchism, Marxist, Communism and liberal democracy are the same idea in different degrees. They want the individual to be more important than the order of the whole, which requires equality so the individual is not forced to prove its own competence. The result is depersonalization and isolation, but it’s for a good cause.

When we talk about groupthink, conformity, peer pressure, hivemind, and committee-brain, we’re talking about the exact same impulse that creates liberalism. Get along with others, don’t offend, make everyone happy by compromising everything. Avoid unpleasant or complex realities.

When this dogma took over environmentalism, at that moment environmentalism excused itself from being a serious philosophy or even its own philosophy. It became a degraded pawn of the leftists. It also ceased to be an option for those who have realized the threat of liberalism and who want to avoid it.

That’s all well and good, but in the meantime, we are the captains of the ship that determines our future. We make what we will face. What we sow, we will reap. The decisions we make today determine what options will be available tomorrow. It sounds obvious but these truths have been forgotten.

During our years of political infighting and other incompetence, the environmental problem has increased. Why? Your television and politicians train you to say “carbon.” That’s a false correlation. Carbon rose, yes, but only because population rose and with it land use rose.

Land use determines how much land is left over for nature. This land performs many functions, most importantly (a) as a natural absorption system that soaks up our pollutants, like plants eat up our CO2 and make oxygen and (b) preservation of natural species by giving them unbroken terrain in which to hunt, eat, play, reproduce, roam, migrate, nest and tussle.

“Happy,” of course, is one of those vague terms no one with a brain will trust. Good for you if you raged at the screen when you saw it. I mean content, satisfied, and psychologically healthy; without those three things, animals experience a decline in physical health.

This leaves us with a crisis. The more we grow, the more we kill them. At some point, we probably will want to limit our own growth… but something opposes that. Leftism, with its incessant demands for welfare, helping the third world, mass immigration, saving the dumb from themselves, and a vast subsidy network of entitlements and government hiring, inherently supports population growth and thus, land overuse.

In other words, the people who are claiming to be pro-environment are those who are most likely to destroy it. Conservatives, by advocating none of those things, are supporting the idea of a stable population with lots of open space for plants and animals. Liberalism is ecocide.

Right now, conservatives are doing their best to resist the climate change dogma that’s very popular with Hollywood, government, industry and our do-nothing talkative neighbors. Conservatives point out that the “science” is unresolved and the motives of the climate-changers are suspiciously leftist.

To obliterate those few voices of dissent, big media and its paid employees (celebrities) are banging on that loud tin drum and howling the climate change mantra ever louder.

The problem with this is that climate change obscures the true problem, which is overpopulation/land overuse, and that by debating climate change, conservatives are letting liberals define the parameters of debate — which cuts out the real problem.

As rightists, we should stop worrying about climate change except to note that it is another hare-brained liberal plan which is sure to fail because it denies reality. Instead, we should promote our own environmental agenda:

That’s not as easy as voting for carbon caps, secure in the knowledge that the consequences of your vote are distant and will be shared by all the voters together, lessening your share. But unlike that pretend policy, the solutions outlined above will actually prevent ecocide.