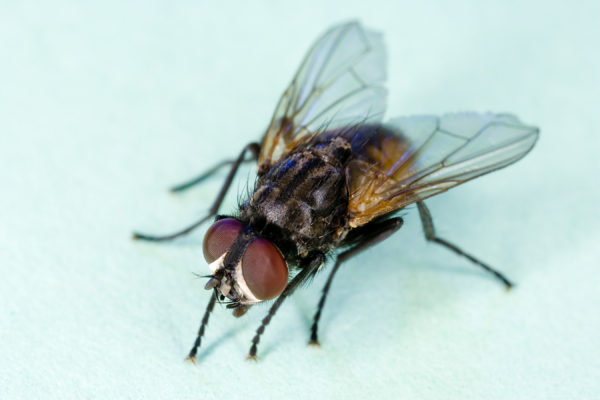 Watching presidential debates has become surreal. It is somewhat disturbing that everyone seems to speak slowly and with difficulty, as if they were having mental confusion problems, with the exception of Donald Trump and Anderson Cooper.

More disturbing is the seeming anticipation and gratitude that people display for being told lies. They seem to hunger for them, thirst for them. Then again, lies are always easier to digest than truth. The dark side of democracy has never been so clear. The members of the public chosen for the townhall style question-and-answer seemed either cynical to one or both candidates, or clueless with glowing faces, wanting to hear what Uncle Santa was going to bring them.

The real star of the show was the housefly (Musca Domestica) that kept landing on Hillary Clinton. Whether it was the land of the dead laying claim to a future occupant, or some other smell that is appetizing to flies, the fly kept landing on her and then staying there, looking quite happily at home. It buzzed by Trump but found nothing of interest. Guess he can kiss that segment of the electorate goodbye, which is significant since they are probably registering insects to vote in Virginia these days.

Although the moderators seemed very proud of their questions, most of them seemed either obvious or contrived to seem profound. The obvious questions were the best: they get the candidates to speak plainly about aspects of their policy and their reasoning. Hillary seemed as if she had memorized twenty talking points and fifteen ad libs in advance, and used them as if she were writing an answer on a bar exam. Her preparation was vast.

Trump on the other hand came across as unprepared, but was not. He clearly had worked on avoiding language that betrayed his background in dealmaking, and on having more focused answers. He also took the advice of the saner supporters and after a slow start, and a brief period where he just seemed bored, went on the aggressive offensive and began nailing Clinton with the various scandals, errors, glitches, deceptions and outright lies of her campaign.

Despite their efforts, the closest the mostly-hostile moderators had to a hit on Trump was the over-hyped tape of his locker room conversation with Billy Bush. Intelligently, Trump at first apologized, and then fought back, pointing out that the recording did not reveal him speaking of sexual assault, at all. The moderators went into full retreat after their Â¡GOTCHA! moment failed, and having cucked them, Trump then beat them down about the unequal time enforcement by pointing at the clock when it expired during a Clinton answer.

He will continue to win supporters with this because his answers were passionate and, if rambling, full of interesting details and connections. He refused to name specifics he cannot yet know, and often had only a single point to come back with. But where Clinton sounded like a law student searching for the perfect answer to please a crowd of professors, Trump came across as someone who actually gets his hands dirty digging into details and making things happen.

Clinton’s answers seemed to focus on emotions, women’s issues, minorities and fear of inequality. She occasionally made some good points, such as when she spoke about possible military intervention in Syria and why a ground invasion would be ill-advised, but then followed it up by reciting the American Vietnam strategy, which to any historically-literate observer sounded insane. While she did not have a health crisis, she seemed wired on something and it translated into overly awkward attempts to “connect” with members of the audience. Some have suggested that she may have had a micro-scale earpiece to receive prompts from her staff because she kept looking down and pausing when answering, but it is equally likely that she was recalling memorized talking points and ad libs.

She seems very much like Saruman from Lord of The Rings: she knows the system is broken, but believes that working with it is the only option. Her answers were designed to be perfect in a free-standing way, and never spoke about practical means, only results she hoped to achieve by dumping money on problems. Her vitriol against Russia seemed designed to deflect from criticism of China, which is interesting given the longstanding Clinton interest in that region. Her tone was clear: take from the haves, give to the have-nots, and otherwise do nothing different.

Trump on the other hand gave rambling Dad answers that hit on important points. He mentioned Benghazi, deleted emails, the $20 trillion debt, the trade deficit, crumbling infrastructure and dying cities, and the misery of middle class Americans. His rambling style allowed him to mix attacks on Clinton with assertions of positive values, and ended up being compelling because of the energy he unleashed despite looking bored the rest of the time, as if he thought he was in a room of numskulls talking nonsense to make themselves seem important.

What this debate made clear is that the battle lines are drawn not by what people think, but by who they are. People who are results-oriented or white will like Trump; everyone who wants the American tax-and-spend freebie for the third world, women and millennials will be drawn toward Clinton. The point is that Clinton promises what money will be spent on and what feelings will be generated (“America is great because we are good,” she said with schoolmarm seriousness) and Trump talks about how to restore function and achieve results. This divides the electorate into polar extremes.

Trump also scored some surprise victories. Clinton was visibly unnerved when Trump kept mentioning the better positions that Bernie Sanders took on her pet issues, which he followed with an attack on her maneuvering to get Sanders out of the race. While Trump thinks Sanders is a moron, he thinks Sanders believes his own rhetoric, but the opposite of Clinton. He also paid her a graceful compliment at the end, which had her looking at him as if she was considering an torrid affair right there in the lobby, at least for a half-second. Advantage: Trump.