Do it for the children 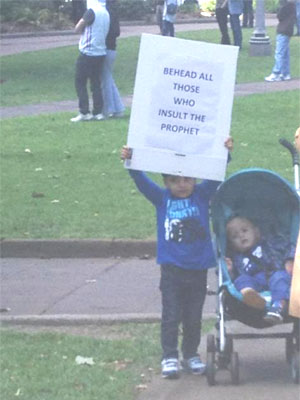 When you need to know how our modern society actually works, remember the phrase “Go get ‘im, boys!”

Politics works through fear or the inverse of fear, which is talismans against fear. Outside of things they worry about, people do not care about governance in the same way they generally don’t care about their lawn mowers, so long as they keep working.

If you want to mobilize people for something positive, you need to cook up an image of its enemy and demonize it, then claim that your positive plan is necessary to drive out the demon and, only incidentally of course, achieve your goal.

This amounts to going out to the town square, setting up your stump, and bloviating dramatically for a few hours. The crowd first shows up to be amused, then gets afraid, then reacts in simian rage. The speech ends with “Go get ‘im, boys!” shouted over the pitchforks, torches, tar buckets and nooses.

Not a positive view of humanity, is it. But we are a species in evolution between our chimpanzee ancestors and our future state as mostly-logical beings. We’re here on the margin so we can prove whether we have the will to reach higher, or simply to fade away.

And so this is how it is.

The targets of our rage

Politics works best when we create a hollow justification to mobilize people. This either has to be something hated, or a talisman against hatred that proves we’re nice.

For this reason, the biggest justifications are:

If you had $5 for every time you heard “Think of the children!” or “My opponent’s program disproportionately disadvantages minorities, women and the poor,” how many gold-plated Uzis could you afford?

These targets do not need to be literal “Go get ‘im, boys!” and they are often manifested in other forms. For example, we don’t say we should hang normal people, but we imply to them that they should feel guilty for having what others do not.

The targets of our pity

The flip side of this is that we use our pity-justifications. We use them for our own purposes. In their name, we do what is convenient for us.

As in the example of the politician above, this can be a legitimate use. If we need new water treatment plants, but because they’re boring no one wants to fund them, we’re in a pinch. We end up saying that Hitler hates our water system and that it needs to be upgraded, or it will disproportionately affect minorities and the poor. The poor! Minorities! You must just about be Hitler to not vote for this water system upgrade.

However, “Do it for the children” has become a cliche because it’s a hollow justification. So is fighting racism, and other politically-correct crusades. People are beginning to figure out that racism, homophobia and sexism are found whenever someone needs more funding for their government programs or an easy job (“diversity coordinator,” now found in almost all corporations).

But in the process, we’ve forgotten that our mentality is using our children as tokens. We do this even to our own kids. They are not there for their own lives, but as accessories and status symbols to make our lives better.

How many times have you seen a parent treat their children like a product, or a precious antique, without regard for how this shapes the child’s mind? We joke about the “baby bangle” but it’s how most modern parents treat their kids.

In other words, kids, you are here to make me look good, feel good and have something to talk about with my friends.

This varies from the arrogant “yummy mommies” who ramble around in giant SUVs, always with a reason on the tip of their tongue as to why they should go in front of you in line or get that last loaf of bread — it’s for the children, remember, and they’re good mothers and so they’re in your face, and do you have kids? If not, you’re no one — to the young women sitting around in cafes comparing their children’s latest “art” projects, which since the kids are three amount to nothing more than discordant scribbles.

These children will grow up in a paradoxical frame of mind. On one hand, they’re told they are free; on the other, there are hidden objectives of the parent that the child is expected to fulfill, visually.

Plenty of hidden sabotages await in this setup. For example, the upper middle class in the United States and Europe specializes in teaching its children to be compliant, kind, generous, passionate and artistic — all skills that will put them at a disadvantage at a job, and guarantee they’ll get date raped. To make Mommy and Daddy happy, they raise their children as doormats who do “significant” things but have no skills. The parents like to keep the kids dependent.

It’s the same way, when you think about it, with other pity targets. People like compliant minorities who show up to have magical insights in films, but don’t actually have a culture of their own to clash with the dominant culture. They love the poor who need them, not the poor who are not photogenic and an opportunity for the giver to publicly appear magnanimous.

To internalize this lesson shows us the downside of equality, which gets us politics of “Go get ‘im, boys!” We use other people for their value as symbols, and in the process destroy them. Normally we’d call this “predation” and run it out of town with pitchforks and torches.

Checking in | The past is alive