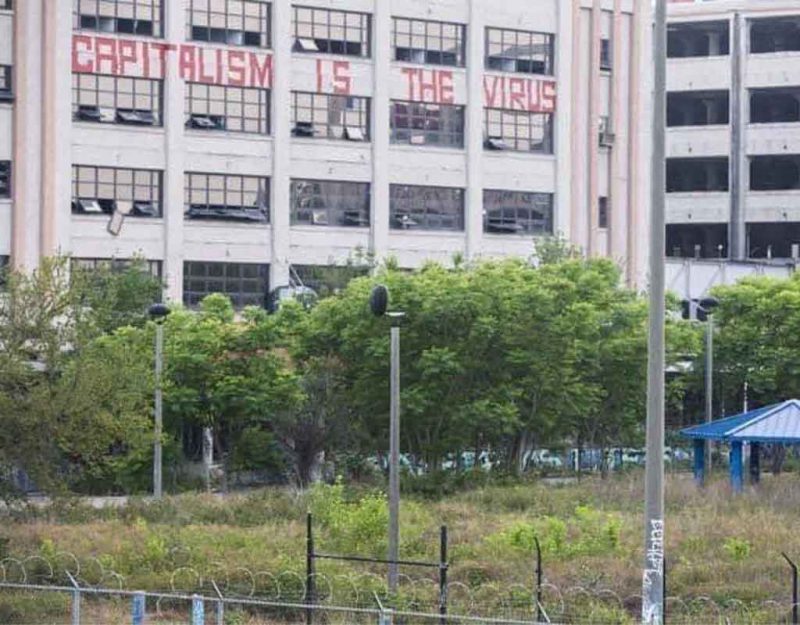 Let us review the sad story of Typhoid Mary, since everything out there is pandemic-flavored anyway, so Amerika might as well “cash in”:

It is not clear when she became a carrier of the typhoid bacterium (Salmonella typhi). However, from 1900 to 1907 nearly two dozen people fell ill with typhoid fever in households in New York City and Long Island where Mary worked. The illnesses often occurred shortly after Mary began working in each household, but, by the time the disease was traced to its source in a household where she had recently been employed, Mary had disappeared.

In 1906, after six people in a household of 11 where Mary had worked in Oyster Bay, New York, became sick with typhoid, the home owners hired New York City Department of Health sanitary engineer George Soper, whose specialty was studying typhoid fever epidemics, to investigate the outbreak. Other investigators were brought in as well and concluded that the outbreak likely was caused by contaminated water. Mary continued to work as a cook, moving from household to household until 1907, when she resurfaced working in a Park Avenue home in Manhattan. The winter of that year, following an outbreak in the Manhattan household that involved a death from the disease, Soper met with Mary. He subsequently linked all 22 cases of typhoid fever that had been recorded in New York City and the Long Island area to Mary.

Again Mary fled, but authorities led by Soper finally overtook her and had her committed to an isolation centre on North Brother Island, part of the Bronx, New York. There she stayed, despite an appeal to the U.S. Supreme Court, until 1910, when the health department released her on condition that she never again accept employment that involved the handling of food.

Four years later Soper began looking for Mary again when an epidemic broke out at a sanatorium in Newfoundland, New Jersey, and at Sloane Maternity Hospital in Manhattan, New York; Mary had worked as a cook at both places. She was at last found in a suburban home in Westchester county, New York, and was returned to North Brother Island, where she remained the rest of her life. A paralytic stroke in 1932 led to her slow death six years later.

Her case stands out because as an uninfected carrier, she would have by any measure of decency avoided preparing food for others if she cared about their survival, but instead she acted in the exact opposite, repeatedly seeking out positions where she could spread the bacterium to others.

Was she a sociopath? Did she hate her employers? Was this early class warfare? Perhaps we can find a clue elsewhere in the article:

In other words, she was an immigrant of a different ethnic group (Irish) than that of the majority (Anglo-Saxon). In diverse societies, every ethnic group acts in its own interests, which includes suppressing the majority and later, other ethnic groups as well.

The first stage of this consists of a passive-aggressive desire to avoid taking any responsibility for that which they are not forced to do by their jobs, the law, and other authorities. That mindset leads to seeking out convenient work no matter who dies, because their deaths strengthen non-majority ethnic groups.

We are seeing something similar in the coronavirus outbreak, which seems to spread in highly diverse areas where the diverse staff of our cruise ships are spreading the virus without seemingly being worried by it:

“That would seem to be the most obvious point of transmission – someone that is handling food on behalf of multiple hundreds of people,” he said.

In a diverse society, the “glue” that bonds people together has gone missing. Instead, there is only obligation, such as economic needs, and the threat of law enforcement. People have no incentive nor interest in protecting each other from disease.

Add to this the knowledge that this crisis would not have occurred without our porous borders, the scarcity of supplies made in China and only grudgingly sent here, and the lack of communication from China about the nature of this virus, and we see why globalism has died in all of our hearts.

Humanity experienced a nice pocket of time during which our democracies relaxed rules, financial wizardry created fiat currency false wealth, and technology propped it all up. Now, however, the arc of those inventions is ending, and we are seeing them fade.

With that loss, we no longer can count on our bubble of normalcy. Nature has returned, and with it the knowledge that life is not certain and death rules supreme, lurking around every corner. The modern system is dying as its “miracles” fade away.