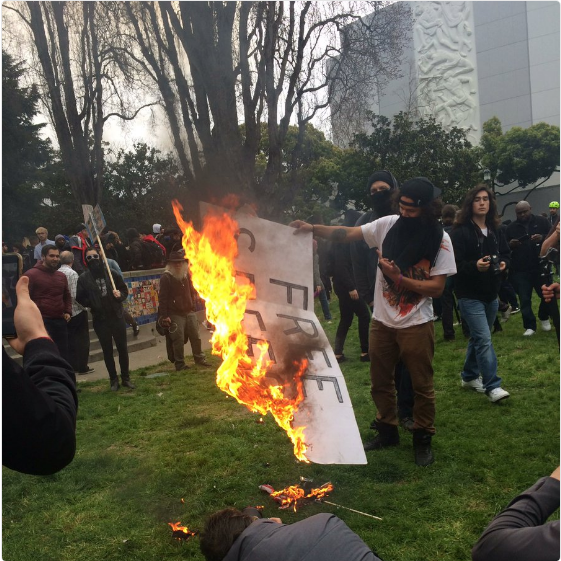 The American Scholar takes a stab at diagnostic dissection of the bizarre confluence of religion, ideology and social status that is Political Correctness:

What does it mean to say that these institutions are religious schools? First, that they possess a dogma, unwritten but understood by all: a set of â€œcorrectâ€ opinions and beliefs, or at best, a narrow range within which disagreement is permitted. There is a right way to think and a right way to talk, and also a right set of things to think and talk about. Secularism is taken for granted. Environmentalism is a sacred cause. Issues of identityâ€”principally the holy trinity of race, gender, and sexualityâ€”occupy the center of concern. The presiding presence is Michel Foucault, with his theories of power, discourse, and the social construction of the self, who plays the same role on the left as Marx once did. The fundamental questions that a college education ought to raiseâ€”questions of individual and collective virtue, of what it means to be a good person and a good communityâ€”are understood to have been settled. The assumption, on elite college campuses, is that we are already in full possession of the moral truth. This is a religious attitude. It is certainly not a scholarly or intellectual attitude.

…Elite private colleges are ideologically homogenous because they are socially homogeneous, or close to it. Their student populations largely come from the liberal upper and upper-middle classes, multiracial but predominantly white, with an admixture of students from poor communities of colorâ€”two demographics with broadly similar political beliefs, as evidenced by the fact that they together constitute a large proportion of the Democratic Party base. As for faculty and managerial staff, they are even more homogenous than their students, both in their social origins and in their present milieu, which tends to be composed exclusively of other liberal professionalsâ€”if not, indeed, of other liberal academics. Unlike the campus protesters of the 1960s, todayâ€™s student activists are not expressing countercultural views. They are expressing the exact views of the culture in which they find themselves (a reason that administrators prove so ready to accede to their demands). If you want to find the counterculture on todayâ€™s elite college campuses, you need to look for the conservative students.

Which brings us to another thing that comes with dogma: heresy. Heresy means those beliefs that undermine the orthodox consensus, so it must be eradicated: by education, by reeducationâ€”if necessary, by censorship. It makes a perfect, dreary sense that there are speech codes, or the desire for speech codes, at selective private colleges. The irony is that conservatives donâ€™t actually care if progressives disapprove of them, with the result that political correctness generally amounts to internecine warfare on the left: radical feminists excoriating other radical feminists for saying â€œvaginaâ€ instead of â€œfront hole,â€ students denouncing the director of Boys Donâ€™t Cry as a transphobic â€œcis white bitchâ€ (as recently happened at Reed College), and so forth.

Political Correctness is a form of Control: an attempt to make all people obey the centralized authority by responding equally to its commands. This stands in opposition to the organic way of life, and cooperation, which point people in roughly the same direction by principle and encourage them to develop their own paths toward the same end.

Leftism is a demand that you obey the herd. They are individualists, and individualists in groups want to hear that you accept everyone no matter how broken they are, even if it means the sacrifice of your civilization. Each individual thinks of nothing bigger than himself, and wants the world to affirm his role as the center of it, at least in his mind.

In this way, we see Political Correctness not as an attempt at altruism, but an attempt to use altruism as a pretense for furthering the social status of the individual, as Tom Wolfe noted. Like most viral ideas, it spreads by the weakness of others, and erodes the basis of civilization, but cannot be criticized because it is “popular” for (temporarily) removing the fear of the meek.