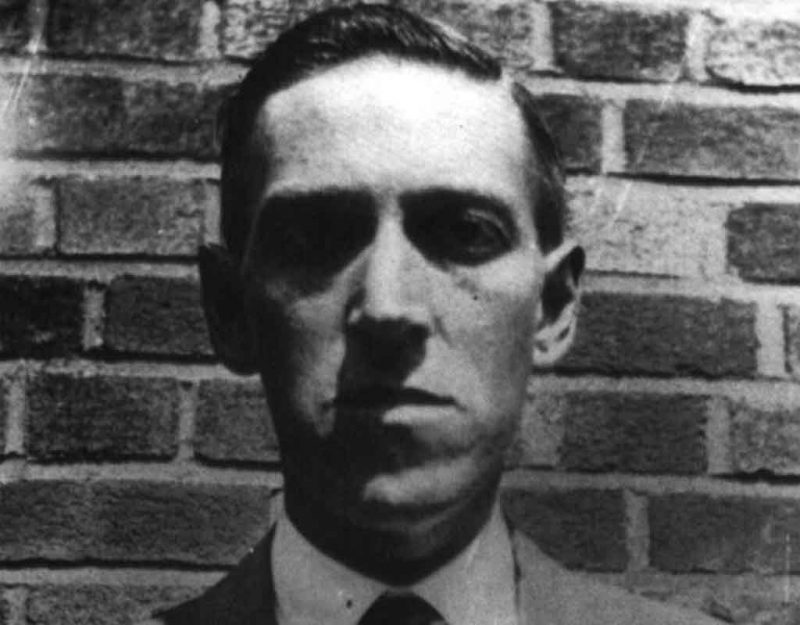 Any time we confront writers from the past who clearly far exceed our present crop, the crypto-Communist regime must begin agonizing over their opinions that conflict with the crypto-Communist ideal of genetic equality, or that all races, social classes, and ethnic groups are the same in ability and potential.

H.P. Lovecraft peered into the darkness of humanity and saw our seemingly limitless capacity for self-delusion in order to avoid facing the grim nihilistic horror of reality, namely how literal it is in survival of the fittest and how that produces some true terrors.

Naturally, his views included race, social class, and ethnicity, and this has caused a paroxysmal spasm of neurosis:

Yet if Lovecraft is an icon he is an increasingly problematic one. This scion of a once wealthy Providence, Rhode Island family fallen on hard times was a bug-eyed racist who appeared to live in genuine fear of the Anglo-Saxon bloodline becoming tainted with corrupting influences. He admired Hitler and recoiled from anything foreign or exotic. A brief sojourn in New York installed in him a dread of migrants, those “squat, swarthy strangers with hardened faces and narrow eyes”. He approved of lynchings.

Such prejudices weren’t simply background colour. They are front and centre of many of his most iconic tales. Consider The Shadow Over Innsmouth (1931), whose half-human “Deep Ones”, with their “queer narrow heads with flat noses and bulgy, stary eyes”, serve as a warning against what Lovecraft would no doubt have characterised as “miscegenation”.

That the Irish were among the “inferior” races struck him as perfectly obvious.

“If the Irish had the ‘right’ to independence they would possess it,” he wrote to a friend in 1921, the same year he presented The Moon-Bog to his patrons in Boston. “If they ever gain it, they will possess it – until they lose it again. England has the right to rule because she does … It is not chance, but racial superiority, which has made the Briton supreme.”

Apparently the characterization of the Irish — 100% endorsed by your columnist here — strikes people as sadistic:

“The Irish natives merely appear as an inarticulate mass of unease,” writes Rob Brown in his essay Hybrids and Hyphenates: HP Lovecraft and the Irish. “Or [they] are reduced to ‘a throng of lurching labourers who followed dog-like with blind, brainless, floundering steps as if dragged by a clumsy but resistless daemon-will’.”

Lovecraft would make his disdain for the Irish even more explicit. When, at the conclusion of The Rats in the Walls (1923), unfortunate anti-hero Delapore descends into a condition of savagery, Lovecraft illustrates his downfall by having him regress from speaking Middle English and Latin to degenerate Irish. “Magna Mater! Magna Mater! . . . Atys . . . Dia ad aghaidh ‘s ad aodann . . . agus bas dunach ort! Dhonas ‘s dholas ort, agus leat-sa! . . . Ungl . . . ungl . . . rrrlh . . . chchch … ” Irish is just one rung above Neanderthal gibberish.

Why so harsh on the Neanderthals, one might ask? The curse of the Irish comes from two things: their isolation, in which natural selection was suspended by low minimum standards in the same style that blighted Communism and Jacobinism, and their admixture with Mediterranean and Asiatic elements coming through Iberia and Eastern Europe.

We can tell the times are changing from this short and quick observation:

Curiously, his racism has had little negative impact on his popularity.

Realism wins out in the end. We can fool most of the people most of the time into thinking that everyone is equal, but eventually, a need for function trumps the need for pretense.