An interesting subdivision of the culture wars is the division between decorative arts and art itself.

There are after all two main divisions in the approach toward making art, using the example of composing music.

Much of our modern art is of the first type. Our jazz-influenced popular culture is fascinated by songs written about the abstract relationship between a B#7dim9 and a D7sus4; they require a fair amount of technical knowledge but once that is accomplished, they “write themselves” in that the artist arranges elements around a theory, then uses rather well-known techniques to inject generic emotion, which we might define as a sensation of being pulled in multiple directions at once with an overtone of sadness or importance, so that the theoretical relationship becomes a song.

It is no different with our visual art. As brilliantly explained by Tom Wolfe:

Yet Theory did not come fully into its own, triumphant, transcendent, more important than painting and sculpture themselves, until after the Second World War. Theory, this first-class coach on the Freight Train of History (to use a phrase from the period), was held back by a little matter that seldom finds its way into the art histories today, as if what the Freudians call “the amnesia of childhood” were at work. For more than ten years, from about 1930 to 1941, the artists themselves, in Europe and America, suspended the Modern movement…for the duration, as it were…They called it off! They suddenly returned to “literary” realism of the most obvious sort, a genre known as Social Realism.

Left politics did that for them. Left politicians said, in effect: You artists claim to be dedicated to an anti-bourgeois life. Well, the hour has now come to stop merely posing and to take action, to turn your art into a weapon. Translation: propaganda paintings. The influence of Left politics was so strong within the art world during the 1930s that Social Realism became not a style of the period but the style of the period. Even the most dedicated Modernists were intimidated. Years later Barnett Newman wrote that the “shouting dogmatists, Marxist, Leninist, Stalinist and Trotskyite” created “an intellectual prison that locked one in tight.” I detect considerable amnesia today on that point. – Tom Wolfe, The Painted Word, Bantam, 1975. (31)

Our literature doesn’t escape this either. The predominant explosion in recent decades has been postmodern literature, where a technical or theoretical concept is expressed through characters and story. The general idea is to express it in as many different fields and situations as possible, sort of a form of theoretical repetition more like a political argument than a journey between realizations. It’s not surprising most of these books end with a political viewpoint as there’s no other way to conclude such a circular narrative. 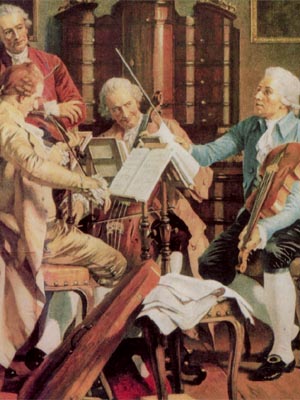 The message of such theoretical art is terrifying and divisive. By seeking out the inherent, it tells us there is nothing but the tangible in life, and that there is no making of choices and bettering ourselves by choosing something more transcendent than other immediate satisfactions. In its view, we are equal people who respond like insects in identical ways to similar stimulus, and thus we are not choosing beings who struggle for clarity, but nerve endings that jerk in response to the right sensations.

In this we see the ultimate role of art represented. More than decorative object, or distraction, art is how we suggest ideals to ourselves and our culture. We idolize characters in novels, design our lives around inspired architecture, and let paintings dictate the aesthetics of each age. Our music inflects us with a spirit, whether the jaunty clarity of the past or the deconstructed, insistent repetition masked by aesthetic confusion of contemporary music. When our art changes, our culture changes.

Take the historical example of Baroque music. Over the course its lifespan as a genre, it moved from purely theoretical exercises exploring the new tunings and forms to using that new language of music to represent items in our souls or our worlds. While the initial theoretical exploration expressed a strong vision of balance and order in the universe, and thus saved itself from true irrelevance, as the years moved on toward the Romantic age artists began seeking to use art as a means to an end, to express something of transcendent and timeless beauty.

We are returning to this debate. Our modern music that is not atheoretical rhythmic cursing with looped samples over it tends to be purely theoretical, whether the theory of music or some demonstration of form that supports a lyrical message. Punk, for example, sought to express a fatalism of communication by reducing music to two chords and a uniform beat over which propaganda ranted. Jazz takes a musical opportunity and explores it, then breaks it down into a pop song to make it coherent to the audience. Neither touches more than a description of life through theory, and both are very far from living that theory in life itself. They are like the comments of visitors at a museum contemplating a subject before retiring to their lives thankfully safe from it and whatever oddness it suggests.

Art may need more focus on balance and order as expressed in theory, technology and science; however, that’s a far cry from working backward, and trying to derive the meaning of life from inherent technicalities. The greatest opportunities for art exist in areas where our answers are not as solid and reductionist as theoretical exercises. Instead, they are complex forays into the soul and its method of bonding with its brief but intense life.

And yet theory, propaganda and medium-to-message art carry a vital threat to us: if we are primed to seek something, we look for it until we find it, and discard other information. This means that we discover only what we think already should exist, and can easily be programmed away from truths we actually need:

The psychological data suggest that “pop out” is a preattentive result but that conjunction perception is the result of attentive scanning of items. Treisman has conjectured that there is a kind of attentive “searchlight,” moving from one item to the next, until the sought item has been found. The searchlight is not the only attentional mechanism exploited by the nervous system. Also in evidence, for example, is an attentional effect when one’s eyes saccade to a movement in peripheral vision or when one’s head moves to foveate the area form which a loud sound emanates or where one expects to see a bright light. – Particia Smith Kirkland, Neurophilosophy, MIT Press, 1996. (475)

Sometimes it seems that the more “human” we try to make our lives, the less humanity exists in them. We democratized art to theory so that all could participate, and in doing so, gutted it of its most vital elements. Perhaps in that a lesson exists not just for art, but for all of human life, on how easy it is to murder meaning by insisting it be confined to the immediate and tangible.