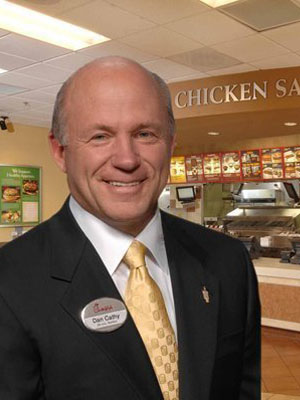 Nature abhors a vacuum, even in her choice of methods of change. Today a bizarre battleground was selected for the culture wars: fast food.

The story is fairly well-known: CEO makes relatively mild statement about his company’s support for traditional marriage. Liberal lynch mob forms, foaming with hatred over the idea of dissent, and demands a boycott of the CEO’s company.

Tired of being pushed back into a defensive position by liberals, conservatives and those who support freedom of association today flooded Chick-fil-A restaurants across America. It’s not about the better-than-average fast food; it’s a powerful statement of resistance, a type of peaceful revolution the likes of which are often touted in the media.

Except in this case, the media isn’t singing its praises. However, it has also fallen off with its snide and sneering moralistic and pretentious campaign of slander. Instead, it is falling into shocked reporting of literal, prosaic facts.

Slowly the world is realizing something important: the massive turnout today is about more than fast food, or even gays.

This is about the pushback. It’s a story of how middle America, the casually conservative white middle class that is the backbone of this country, approved liberal egalitarian reforms over the past 50 years to correct the wrongs of the past.

However, they misinterpreted liberalism. It is not about making things better. It is a power grab by those who are not ready for power. It emphasizes the individual in its quest for novelty, ego adornment, socialization and validation of its impulses. As a result, it is a consummate reality-denial engine, and one upon which its victims rest their self-esteem. It is pathological, like a mental disease of a parasitic nature. It drives its victims on to commit completely unreasonable acts while insisting that they are taking the moral high ground.

They thought they were doing the right thing when they accepted the changes of the 1960s and then the second wave of those changes in the 1990s, and finally when they elected a half-black president. Finally, they thought, we have atoned for the past and fixed our problems!

And then two years later it became clear that, far from seeing Obama’s election as an end of obligation, the left saw it as an open door. To increase entitlement programs, sure, but even more, to increase guilt. It wasn’t so much the ongoing wealth transfer to the poor but the shift to Soviet-style propaganda everywhere.

Tolerance went from being an acceptance of others, to being a political standard which was enforced with ostracization. If you did not accept everyone, you were racist, homophobic, sexist, or classist. Even if you had good reasons for not accepting them.

This is the socialized natural of liberalism. It is not a political order, but a social one. It stays popular by insuring that all people are included, by removing any standards or values that could possibly preclude the inclusion of any individual.

Naturally, this task will never end. It literally requires the destruction of all differences between all human beings. And this slowly dawned on middle class, casually conservative America.

The great Chick-fil-A protest of August 1, 2012 was a pushback against the United States going full Soviet. Hopefully Europe will have a similar moment; I think it’s likely. Starting in 2009, people have seen leftism for what it is, and began unraveling the 220 years of leftward drift before it.

Gays, like African-Americans, are proxies in the battle of leftism. Although just about every major corporation bows to the gay interest lobby, it isn’t because a huge number buyers or employees are gay. It’s because being pro-liberal guarantees you approval, and not going alone with the liberal plan guarantees sabotage by leftist zealots.

Except that as Chick-fil-A found out, sometimes there’s an inverse boycott or counter boycott. People get sick of being pushed around and told what to think, especially when it clashes with what they know as a way of life.

Leftism is not a plan for making life better. It is a mad crusade that uses people in exchange for making them feel relevant. Its tolerance is for show, and its real agenda is social, which is to force acceptance of everyone. Like confirmation bias, it is a mental trap that is inherent to being human. In 100 years, future citizens will look back on our present era as one of mental disease being understood as “normal.”

The first step on that path was the pushback we saw today. People pushed back against liberalism and the political correctness regimen. Even more fundamentally, they pushed back against the idea that you either accept every behavior no matter how objectionable, or you’re a hater and a bigot. They’re tired of being held hostage to liberal ideology.

An offer you can’t refuse | The perfect customers