Conservatives Do Not Understand The Left 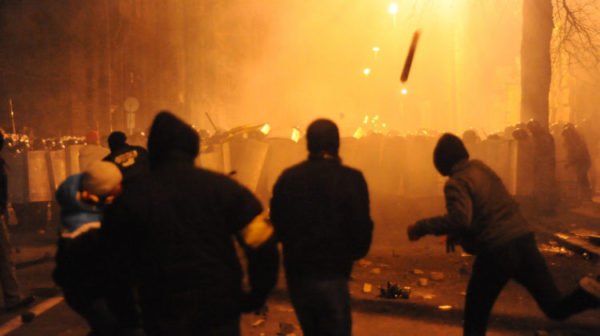 Let us venture back to the French Revolution, after which the modern definitions of Right and Left became known. The Left had won and overthrown the kings, and France tried to reconstitute itself around the new political assumptions. The Right formed of those who realized things had been better before but were willing to compromise with the new idea.

The Left exists for egalitarianism, or the idea that everyone is equal. This arises from The Enlightenment™ idea that all people possess reason, which means equal reason, which means that we no longer require a hierarchy based on who has the most reason, but can instead sort out problems as a mob.

Leftism can be translated then into the idea that we need no hierarchy, and instead, that every person is a god of his own creation. The individual is supreme above the order of nature, a need to strive toward divinity, and even social standards and culture. Egalitarianism is a cult of the ego and it displaces everything else because it is addicting to human minds.

Back in the post French Revolutionary days, however, conservatives made a fatal decision: instead of resisting the Left outright, they would compromise with it, and retain their own methods but adopt the Leftist goal of egalitarianism. In doing so, they invalidated their methods, which were based not on human individuals but results for civilization as a whole.

In other words, conservatives became liberals because they could not reconcile the need for a society of time-proven solutions with the new and infectious viral meme of egalitarianism.

This leads to the type of utter confusion that blights the modern conservative mind:

The Conservative upholds some obvious and self-evident good thing, like equality or property rights. The Progressive, like a wolf in sheepâ€™s clothing, promotes an idea that it the diametric opposite of the first idea, such as elitism or communal rights, and then merely calls the first idea by the opposite of its true name.

The argument at that point becomes an argument of metaphysical philosophy, or an argument of worldview. But the worldview of the conservative is the Christian worldview, which is why they believe in things like the equality of man, the rule of reason, and the law of identity.

No conservative should endorse equality. Further, conservatives need to recognize that property rights are a means to an end: the health of the civilization and, through it, the best chance of the individual for leading the best possible life. Anything else is confusing the tool for the goal.

When conservatives endorse equality, freedom, liberty and individualism they are unknowingly becoming servants of the Left. Those are at best intermediates, or steps to the end of a healthy society which enables the individual to live a good life without interference from the insane. The best societies reward the good, and ignore or punish the bad, including the insane, unhealthy, delusional and egotistical.

Conservatives do not understand the Left. It is best to view them as computer programs out of control, with all of their instructions supplanted by a single pathological goal: advance equality. They do not care about consequences, decency, or the future of the nation. They would rather achieve their ideology and immediately perish in flames than postpone it.

When conservatives adopt any part of the Leftist, or egalitarian, ideology, they turn into similarly programmed beings. Reality must be subjugated to the needs of ideology. This makes them essentially insane, or oblivious to inputs from the world around them, satisfied only by their internal sensation at the idea of ideology. In this way conservatives become Leftists without knowing it.

The essence of conservatism is time-proven truth, or consequentialism, which favors a certain type of society that is totally alien to what we have now. But reality it is what it is; we must work for this “impossible” goal or become assimilated by the insanity around us, and while that seems harsh, becoming ideological zombies is far worse.