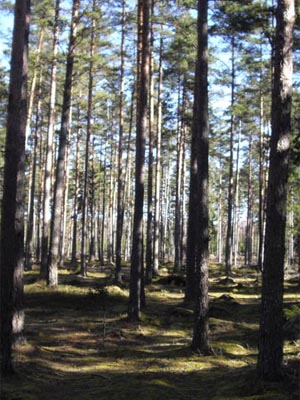 Every civilization ever created has faced an environmental problem: a healthy civilization grows, which means that it produces more people than the land can carry.

A number of pitfalls, or fake solutions, present themselves: growing upward in the cities, which essentially renders people sociopathic by cramming them into too tight a proximity, and licensing “green” lightbulbs, trash bags and SUVs, which makes a ton of profit for someone but doesn’t solve the problem.

The only solution is to at some point shut the floodgates and stop growing outward, and instead grow inward. Improve in quality, not quantity; be more efficient, and be more conscientious.

Which group do you think will accomplish this:

Obviously, that was a rhetorical question; it answers itself: no party of permissiveness is going to do anything effective about limiting growth and waste.

They will step right into those pitfalls by making “symbolic” public gestures, like licensing green lightbulbs, recycling condoms, and banning full-fat hot dogs. But they’re not going to fix the problem.

Real environmental problems boil down to one thing. We’re using too much land. If we use less land, there are fewer of us, less waste, and more natural spaces to clean it up.

More importantly, there are open spaces without fences or roads where the plants and animals that create our natural ecosystems can thrive.

Every animal requires a certain number of acres not just to live in, but to roam in. Each plant requires some space, and some animals, to survive. It’s not like a zoo, or apartment, where you put each animal in a 10′ x 12′ space and break for lunch.

We can also do a better job of not polluting. Cleaner energy, cradle-to-grave recycling in the country where products are purchased, and better enforcement of toxic waste dumping — all are important.

But without us setting aside huge tracts of land for our species, they die out.

Historically Florida Panthers lived in Florida, South Carolina, Georgia, Mississippi, Louisiana, Arkansas, Alabama, Tennessee and some think they reached into Texas. Today they only live in parts of Southern Florida including the Everglades and the Big Cypress Swamp. The Florida Panther is threatened by the destruction of their habitat, collisions with automobiles, and genetic defects caused by extensive inbreeding. – Florida Panther FAQ

Too little land, and the population drops to too few individuals to avoid damaging inbreeding.

Too many fences, and they can’t roam that 200 mile range. Imagine being confined to your apartment or home for the rest of your life. That 1k-2k square feet isn’t looking so big anymore.

Without us setting aside vast amounts of land that humans do not touch, our forests die and the ecosystems of which they are part collapse.

Maybe we can learn from the past:

Poor agricultural practices and years of sustained drought caused the Dust Bowl. Plains grasslands had been deeply plowed and planted to wheat. During the years when there was adequate rainfall, the land produced bountiful crops. But as the droughts of the early 1930s deepened, the farmers kept plowing and planting and nothing would grow. The ground cover that held the soil in place was gone. The Plains winds whipped across the fields raising billowing clouds of dust to the skys. The skys could darken for days, and even the most well sealed homes could have a thick layer of dust on furniture. In some places the dust would drift like snow, covering farmsteads. – The Great Depression, Cary Nelson, Illinois University

When we shatter ecosystems, we lose what makes the land as it appears. We see rolling hills and flat prairies and think that maybe the land was made that way.

In reality, however, we cannot separate the land from the species that live on it. Those rolling hills and flat prairies are there only because of the grasses holding the dirt together, and the species that maintain it.

For a healthy prairie, you need animals to eat grass seed and in so doing, scatter it widely; you need larger animals to deposit nutrients through waste and decomposition; also needed are a host of bugs, worms and smaller creatures that condition the soil.

When all of that disappears, the whole thing falls apart. A prairie can resist a few years of drought; farmland cannot.

This is why many are pushing for us to conserve forests:

Preventing deforestation, through which an area of forest equivalent in size to the UK is cut down every two years, is not desirable, but essential for maintaining the earth’s natural capital upon which the global economy relies.

In fact, the United Nations Environment Programme (UNEP) has calculated the current rate of deforestation needs to be halved by 2020 to prevent global temperatures rising to dangerous levels. – BBC

Forests are the lungs of the world. They regenerate its air. They also house its species and condition its rivers and soil.

Like prairies, forests are a self-maintaining ecosystem that can survive many stresses. That is, if it’s left alone.

Turning it into a public park ensures that soon people will want paved paths, will scatter litter throughout it, and will drive away natural species through constant traffic. You’ll have squirrels and raccoons left, neither of which are endangered.

We need to conserve the land, and to set it aside.

Before conservatives started fighting a rearguard action against liberalism, they were known as those who conserved. They conserved culture by keeping it alive and funding its outpourings; they conserved society by standing against harmful habits and bad laws; finally, they conserved nature by setting aside as much land as they could.

None of this is as exciting as what our modern crusaders do, inventing “green” products and talking about wealth re-distribution through carbon cap and trade. But think for a moment: even if our modern crusaders get everything they want, our environmental problem will remain.

Only conservation conservatism can stop it. Conservatives are not permissive; they know reality exists not as a zero-sum game, per se, but as a system with clear rules of order. They know that if we don’t adapt sensibly, nature’s response will not be what we hoped for. And nature does not care what we hope.

While many people will offer environmental policies that amount to expensive band-aids, none are wholly effective. Conservation is, which is why many people are afraid to discuss it; too much is at stake, and they fear change.

But if we really desire to fix our environmental problem, it is a necessary option that will succeed where our band-aids fail.