Confederate Monuments Debate is About Race, Not History 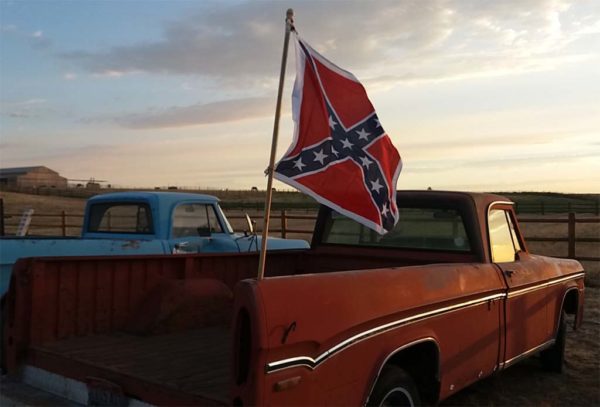 In the West, we are a people defeated by democracy, which always chooses the simplest option over the most accurate. We were warned by history, and thought we knew better and could control the beast with our laws, but it ate us alive. Now we are fighting over whether to rise again or anesthetize ourselves with idiocy while waiting for Brazil 2.0 to crush our souls with its hopeless futility.

As the Left agitates to remove Confederate monuments, many raise a number of arguments against this, namely that we are erasing history and showing a dangerous ideological mania which — like panics, fads, trends, and other herd behavior — will lead us to a Soviet-like future. But another argument can be framed, which is that these monuments speak to an essential part of our present as well as the past.

One Leftist argues that these statues represent whiteness, which he/she/it assumes is automatically bad:

An infographic from the Southern Poverty Law Center demonstrates that the majority of the monuments were built between 1910 and 1920 as Jim Crow became law throughout the south and, later, during the 1950s and 1960s as African Americans demanded full citizenship.

…It seems only right that the debate about Confederate memorials happens now. It is too easy to condemn white nationalists and neo-Nazis. Their explicit hatred makes them monsters. But how should we understand Trumpâ€™s â€œinnocentsâ€ â€“ those who were simply there to protest the removal of Robert E Leeâ€™s statue?

That statue represents an idea of whiteness they refuse to relinquish; it is a part of a politics that trades on white fears, ongoing cultural wars that scapegoat black and brown people and policy decisions deeply rooted in racial animus. Until we confront honestly all of this, we will remain on this racial hamster wheel.

Diversity never works. We know that it cannot work because each ethnic group has a self-interest of its own, namely to be in charge of its future, which requires that it be dominant so that it can establish moral, legal, cultural and genetic standards that support it and prevent it from perishing through outbreeding.

When there are multiple groups in a state, and one of them gets new rights, the healthy response — although not the best response, which is to end diversity — by the other groups is to double down on their own identity and assert it. The Confederacy was many things, but mostly it represented to the people of the South a way to live apart from the ideological and financial regime of the North.

In the South, some things were more important than money and popularity, like way of life, heroism, folkways, and the calm existence of an agrarian society. Slavery, which was destined to die as machinery became more advanced, was a part of this in the same way that serfdom was part of Europe: bulk labor was needed and for the most part, was treated well but prevented from having power in society.

As African-American rights became a focus in America, Caucasians asserted their own needs through remembering this part of history. The Left knows this, and that is why they attack these statues and other parts of history: they want to erase Caucasian identity so they can dominate America and remake it in the form that they want. For white Leftists, that is a soft USSR; for every other ethnic group, it is them dominating all other ethnic groups, whether they are consciously aware of this or not.

This is why politics in America has boiled down to identity politics:

This isnâ€™t a battle over ideas or the Confederacyâ€™s place in American history, itâ€™s sheer and mindless identity politics.

American towns and cities are now increasingly being besieged by agitators who flaunt the law, direct their hate toward fellow citizens, and openly attack the crucial principles at the heart of the American way of life.

The resounding message that these events send is that in 2017, itâ€™s impossible for this country to accept people of different creeds and points of views. You are either on the â€œright side of history,â€ as President Barack Obama said, or you are on the wrong side.

The narrative is increasingly join us, or be crushed.

The “right side of history” involves destroying Caucasians for having been successful in the past, and for trying to be so again, which requires removing diversity so that Caucasians can assert their self-interest. The rise of identity politics is a natural and inevitable consequence of diversity. We know this because the statues went up in response to African-American identity back in the 1920s-1960s.

Angry mobs want white identity dead because mobs want equality. The type of people who join mobs want to force society to include them regardless of their deficiencies, so they use equality to make mediocrity on par with productivity and excellence. They join mobs in order to be anonymous and escape accountability for their acts, and to use the ambiguity of the mob to force their personal agenda on society.

As one protester for the Right pointed out, this is not about history but about the future:

“The left in this country is trying to destroy white culture and white heritage and American heritage, because history doesnâ€™t fit their politically correct scenario,” Roy said.

Roy argued that the United States was a “white country” until 1965, when Congress removed quotas in federal immigration law that heavily favored northern Europe to the exclusion of other immigrant groups.

…He now views Vermont as a “leftist safe space,” and said the reaction to his involvement in the white supremacist rally shows “communist mentality” and “group think.”

“There’s nothing wrong with white people standing up for their own interest and identity,” Roy said.

The Left is a spectrum, which means that Leftists differ only in a matter of degree. A Communist is simply a Democrat with power, in part because non-working ideas like Leftist require increasing doses of power to function. The Left pretends to be collectivist, but like a mob, a collective is formed of individuals acting toward selfish ends, namely forcing society to support them and allow them more power than they deserve by right of their level of intelligence and moral character.

All of this activity distracts from the fundamental idea: either every ethnic group has a right to self-interest, or one ethnic group is hijacking a presumption of victimhood — based in a slanted historical narrative — in order to game the system and use it to accomplish their own ends. Right now, there is a coalition of non-white and Leftist groups, but that will not last once Caucasians are disempowered.

In response to this, the answer is not to focus on the Confederate part of the equation, but admit that the Confederate flag is a symbol for Western European culture in America, and that we have a right to our own self-interest. Not only that, but we acknowledge ahead of the curve that diversity has failed, and seeing the enmity in those opposing us, have a right to end it and move on toward our own future.