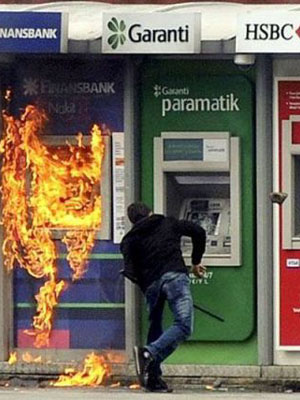 Our political system polarizes us. Like many of our most important decisions, it causes us to drift toward extremes so our position is clear to everyone in the room.

We tend to analyze these positions as logical responses, but we miss out on what they could be: adaptive justifications. In other words, these attitudes are ways that we justify our continued participation in the system, which requires we believe it has a future.

There are two important vectors for the average citizen. First, they must believe in their own efficacy; second, in the efficacy of “the system” which is the combined effort of government, economy and culture around them. If the system is not effective, it cannot help them — or hurt them for disobeying.

Our modern systems are like the drunken, diseased and senile tyrant of fairy tales. Tyrants are not just authoritarians; they are authoritarians without any direction but maintenance of their own power. They aren’t just bad leaders, they are the anti-leader.

We know that the tyrant is pointless and will say and do anything to maintain his reign. Like most rich and bitter men facing death, he wants to take us all out when he goes. But we’re not yet to the point of saying the tyrant has lost his power, and enough of us rising up at once to oppose him.

In the case of modern society, the tyrant is all of us — it’s shared social attitudes and viewpoints that cause us to believe in certain religious icons like democracy, equality, economy, freedom, etc. These definitions are the tyrant’s power.

We don’t have a single leader to blame because as a mass we are the leader. When we swarm on a product, it makes billionaires. When we hover around a political idea, it makes world leaders. We are inward-looking, trying to figure out what the crowd wants so it will reward us.

This tyrant is harder than most to dislodge. Killing a king, or overthrowing a government, is easy by comparison. Even genocide is tame and easy. But when people stop believing the tyrant can reward them or hurt them, the tyrant will begin to fall.

Realizing the incompetence of modern society is essential to its downfall. Our governments cannot buy a hammer for under $20,000; our social crazes never find answers. And now that this has gone on for two centuries, we’re tired of the constant class warfare and internal division.

At that point, the adaptive justification shifts. We can no longer take either extreme because it’s a comforting illusion that helps us make it through the night. We see both extremes as illusions, and turn to the ideas that came before the great divide into these two illusions in 1789.

The opposition is strong however. They cling to the idea that a solution can be found in the options on their screen, both of which are mostly liberal. Whichever side they pick, they are reinforcing the power of the tyrant by affirming his legitimacy.

The young especially cling to their hollow rebellion, shaped from products bought from large corporations and entertainment activities, because it allows them to believe they have a future. Their ideal is that they can rage about a little bit, get some new civil rights laws passed, and then everything will be perfect.

It is saddest to see the young doing this, because they have the farthest to fall. Where they could demand actual change, they are too ignorant and scared, and so they adopt what “everyone else is doing,” which is rebellious but like all rebellions strengthens the idea of what it rebels against.

When you rebel, after all, you don’t replace that which is there; you replace the people who occupy the positions created by that power structure. You become another one of the options on the screen, inevitably swallowed up by whichever of the two is closest to your ideal.

The clinginess is growing in intensity as the tyrant accidentally displays more weakness in public. First his economy burped, then his military vomited, and finally his vision of peace and happiness keeps erupting in boils and class warfare.

Cling behavior of this type of ardent desperation can only mean that those who read this post are not the only ones to notice the imminent death of the tyrant. The next step is for people to accept this death, and then slowly realize that it opens up fields of new possibility for a better life.