Breitbart Fires Writer Katie McHugh For Stating Truth About Diversity, But She Does Not Back Down 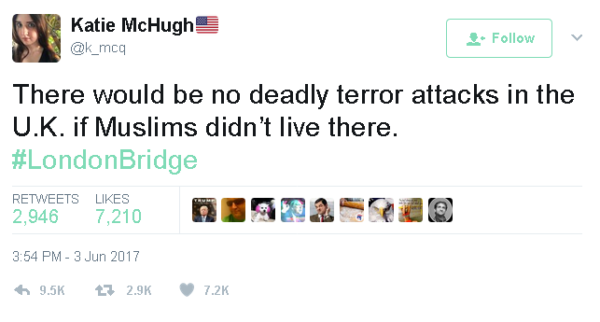 Apparently it is offensive to state the truth: when attacked by Muslims who live in your country, it is safe to conclude that had those Muslims not been living in your country, the attack would not have happened.

Leftists, including most conservatives, do not want to acknowledge the obvious, which is that it is much easier to defend against foreign invasions than guerrilla terrorism arising on your own streets. The proliferation of spy programs, laws, undercover agents and paid informants tells us that as the West balkanizes, we are having trouble keeping our own diverse citizens from attacking each other.

Breitbart news editor Katie McHugh dared to allude to this uncomfortable truth in a tweet, and Breitbart editors — reversing their previous conservative position in defense of the ability to speak, think and write without fear of political retaliation — promptly fired her. Not to be bowed, McHugh stickied the tweet and appealed for aid from her readers.

As with all political purges, this one exists to hide the fact that a state policy which is necessary for the ideology of that state, but not the welfare of its people, is failing. Diversity never works and always produces conflict, as conservative writers such as Ann Coulter have noticed.

It is not racially discriminatory to say that any diversity does not work, because to say this does not target a specific group as the reason for the failure of diversity, as angry bigots tend to do; instead it points out that diversity itself is the source of the failure of diversity. Nor is it cruel or unreasonable, because unrealistic policies cause mass misery and governments kill to hide this fact, as we saw in the last century.

In the West, we need a vast mass maturation so that we can discuss this and other controversial topics. The controversy does not mean that these topics are somehow in contention, only that up to half of our population is in resistance to accepting the possibility that they are wrong. In the meantime, we all suffer for their pretense of moral superiority.