Breakfast with the Dirt Cult by Samuel Finlay 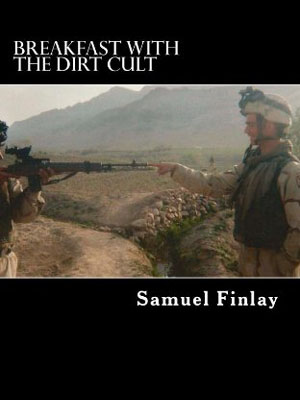 A chronicle of the adventures of an American soldier in Afghanistan, this book contrasts the social impact of feminism, the emotional and moral consequences of liberalism, and the breakdown of society with the quest for raw Nietzschean survival as embodied in the process of combat and survival.

The action follows the life experiences of Tom Walton, a 20-something American who senses something is not quite right in the world. He is looking for something to hold on to, and to believe in, while he struggles to make sense of the world around him. For most of the book, his reliance falls on a young woman with whom he has found affection.

As time goes on, Walton is deployed to Afghanistan. Most of the action of the book occurs either in training or in action during the Afghan conflict, featuring Walton going from having never had combat to having experienced combat. The description in this area is quite vivid

While the external action goes on in the battlefields, bars and bedrooms of the world, the most important activity of this book goes on in Walton’s mind as he reconciles his experiences with ideas he has learned and been analyzing over time. The disconnect between reality and expectation fuels his examination, which leads him toward many traditionalist, anti-liberal and anti-feminist conclusions.

Finlay explores many concepts that fit into the nexus of the growing anti-feminist awakening known as the Men’s Rights movement, which combines a fundamental anti-liberalism with a rejection of androgynous roles and a loss of masculinity. The Men’s Rights movement is interesting because it is always at the edge of social conservatism of the most extreme nature, since its diagnosis of feminism reveals how “equality” shatters the unique and complementary beauty of the genders.

As Walton stumbles through a relationship, he notes several painful factors. The lack of exclusivity makes him realize a beauty is missing; the hypergamy of women makes all of his interaction with women seem to be like a game in which they have rehearsed all the right moves. Through Walton’s eyes, we see modern dating as the insincere mutual manipulation sect that it is, and his disgust with it is most profound when he contrasts the beauty of nature, of combat and of self-reliance against the saccharine treacle quagmire of modern dating.

One of the interesting themes of this novel is the shifting of Walton’s analysis. Toward the beginning, he blames the usual suspects for a lack of fun: rules, regulations, sobriety, discipline. Toward the end, having been baptized in fire and blood, he starts to see how the permissiveness and ambiguity of modern society leads to a space of no values in which there’s no point doing anything, and really no point trying for anything above and beyond the norm.

Something was wrong. It wasn’t merely the wounded and the hospital; it was war, and that was to be expected. But the country, the world…the whole spirit of things was shot through with vileness and confusion. He couldn’t put his finger on it, but he sensed its presence nonetheless. (221)

Walton is a perfect protagonist-narrator because he is smarter than average but above all else, an innocent. He wants to experience the world, to read great literature, and to have adventures. He is bored and good-hearted, although far from perfect, but his desires are all perfectly normal. He is terrified of life passing in a meaningless blur after which he would have nothing to offer but regrets. However, he feels trapped in time by what he perceives by the end of the book as the complete decline of civilization.

The combat sequences written in this book are not Hollywood. They are instead more like something you would find in an outdoorsy magazine, with the combat part seeming like an incidental event viewed mainly through the eyes of shock. Characters, although sparse and not particularly prone to develop, reveal themselves through what they are willing to endure. Walton’s praise showers on those who are not just intent on surviving, but who have something greater embedded in their soul, even if just a yearning for experience or adventure.

Through Walton as a mouthpiece, Finlay shows us the landscape of a ruined culture. There are the manchild boys who espouse veganism and yet cannot make a single clear assertive statement; the families touched by war and death; the dysfunction of the system, the aimlessness of its people, and above all else, the careless indifference and passivity of the average person. Walton shows us the invisible dystopia that is not yet Blade Runner, but in its heart is already there.

At some point, he had embarked upon his own regime of hedonism in the name of fitting in and “having fun.”…Eventually people in such circumstances grew addicted to novelty. As they did, they lost their edge and devolved into perfect savages…In coming to dominate the planet and achieve widespread affluence on a scale never seen before, [the West] had become a victim of its own success and had embraced self-castration. The rot of imperial fatigue gnawed as its core. The earth stank with it. It had taken something fundamental from its own people, and they had grown soft and decadent in the warmth of learned helplessness, making deals with whatever devil promised them everything without them ever having to pay or bleed for anything. (128)

This book could be a lot shorter, perhaps a hundred pages or more, without losing much. While the language is often beautiful, it also frequently suffers for the condition of being halfway between a memoir and story, such that many words are used to describe mentation but the surrounding events do not exactly demonstrate this. Oftentimes, lengthy descriptions could be replaced by singular evocative events or more compressed scenes. These tendencies contribute to the book having a long middle section and a slightly rushed ending.

Breakfast with the Dirt Cult explores themes of inward value versus social decay through visual examples that are helpful to those who find philosophy not vivid enough. By picking a slightly enlightened everyman protagonist who is more innocent and serendipitous than average, Finlay gives us a powerful lens into the culture he examines and the “inner self” values that contrast it. The result is an insightful commentary on the values of a time, as seen from the deck of the ship as it sinks.