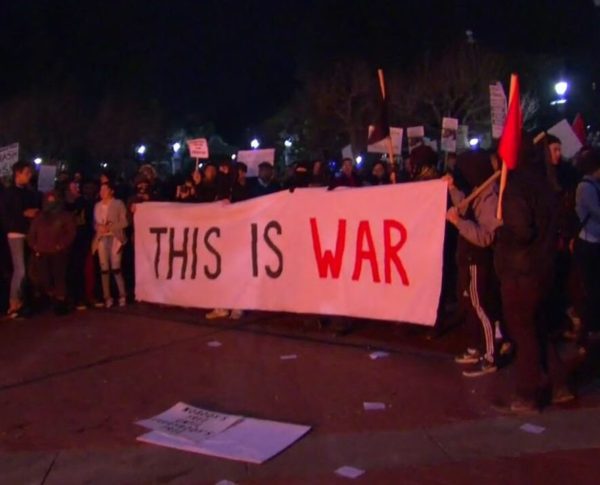 Leftism fragments societies like all forms of individualism because it acts against order, which includes hierarchy, and therefore creates internal competition for power in those societies, causing themselves to tear themselves apart with infighting. This results in a “flat hierarchy” with a few leaders ruling over a raging mob.

When societies fragment, the first act is to try to guarantee the ability to exist apart from the insanity through “cultural libertarianism” or “freedom of association” or some other similar idea. These, like the American Constitution, consist of allowing some to break away from the rest through rule of law, which fails because the mob then just changes the law:

In a prior age, this problem was mostly solved through free association, home owner associations and covenants. People in that neighborhood would have prevented the threat to their property values by prohibiting the sale of houses to people who did not belong. It was not entirely fair, of course, but it allowed people to protect their property rights without having to resort to lying. As is always the case, there were trade-offs, but at least their was a natural way for people to guard their rights as property owners and citizens.

…Free association is illegal now. If a real estate agent is too obvious in how they handle these things, they face disciplinary action from the real estate board. A homeowner, who refuses to sell or rent to whoever shows up, can easily find themselves in front of a judge. Freedom of association is no longer a right in America. Everyone has to seek permission from the state before they can make these decisions. That means finding a place to live has become a game of cat and mouse for middle-class families.

Nice, decent, friendly people think they can write laws and that these words then have magical properties such that they cannot be violated. In reality, either the terms, the interpretations or the laws are changed to be inverted, or to do exactly the opposite of what they originally were intended to do.

As a result, the cultural libertarian / freedom of association types find themselves unable to break away from the mob, which was their intent in the first place. Anyone with experience in this world knows that most people are disasters caused by their own poor decision-making. As a result, groups always demand free stuff and the right to be included everywhere.

The next attempt by the functional people is to try to escape the dysfunctional masses by creating separate states. In this way, they think, they will be safe from the insanity and free to pursue their own path. As the Confederacy found out, however, this merely incenses the mob, which then attacks en masse.

However, a better way for this to happen is to encourage the dysfunctional mob to break away and then to isolate them economically, politically and culturally:

[I]tâ€™s time for blue states and cities to effectively abandon the American national enterprise, as it is currently constituted. Call it the New Federalism. Or Virtual Secession. Or Conscious Uncouplingâ€”though thatâ€™s already been used. Or maybe Bluexit.

…We wonâ€™t formally secede, in the Civil War sense of the word. Weâ€™ll still be a part of the United States, at least on paper. But weâ€™ll turn our back on the federal government in every way we can, just like youâ€™ve been urging everyone to do for years, and devote our hard-earned resources to building up our own cities and states.

…For starters, we now endorse cutting the federal income tax to the boneâ€”maybe even doing the full Wesley Snipes and abolishing it altogether. We will raise our state and local taxes accordingly to pay for anything we might need or want. We ask nothing more from you and your federal government. Nothing for infrastructure, or housing, or the care of the poor and sickâ€”not that you gave us much, anyway. All we want is our money, and you can keep yours, dollar for dollar.

In other words, go back to the Constitutional Confederation and un-do what has happened under the Constitution, and make America into a confederation — that tricky word, again — of states, not a unified country. The article claims some dubious things, such as how blue states fund red states, which is nonsense when you consider that blue state funding goes toward federally-mandated programs in those red states, which are otherwise just fine without blue state money.

This type of balkanization is the first step toward actual nation breakup. It will probably not work the way that Bluexit supporters hope, because eventually the nation will have to decide on things like foreign policy, and the two will be at odds. This means red staters fighting for blue state ideology or vice-versa, and that will provoke national collapse.

However, it has a positive side: it will remove the power of the federal government and allow the states to again be “laboratories” where different policies are tested. This will in turn concentrate all of the social decay in some areas, and let the other areas thrive by being family-centric and culturally-centric. The Right always wins under these conditions.

But, much like freedom of association, it will not stand. As the collapse happens, the various balkanized groups will begin forming alliances such that they can control the North American landmass. At that point, it will become clear that one can never run away from civilization decay: the only solution is to stop the bad leadership and relocate those that do not fit in the traditional civilization.